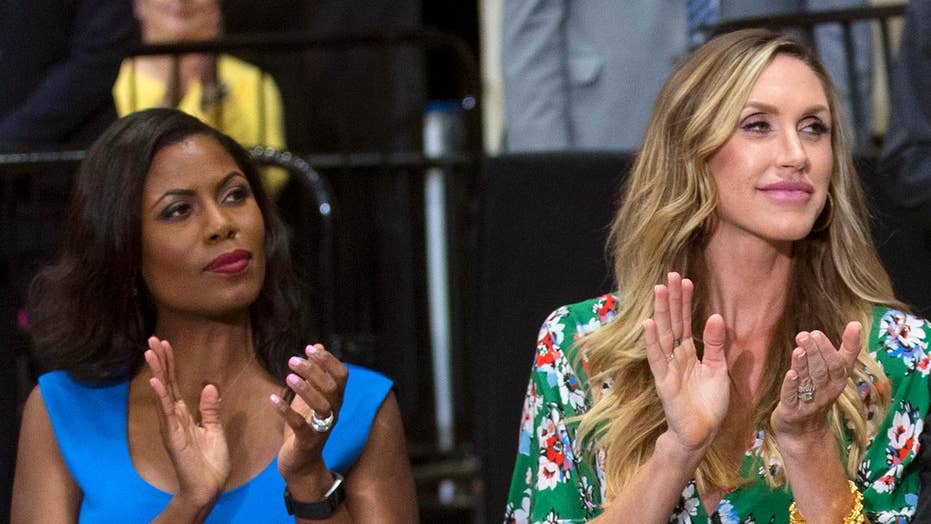 Lara Trump tore into her old friend Omarosa Manigault Newman on Thursday after she released a tape of the president's daughter-in-law offering her a job on the 2020 campaign shortly after being fired from the White House.

“I hope it’s all worth it for you, Omarosa, because some things you just can’t put a price on,” Trump, a senior campaign adviser, said in a statement.

She fired back after Manigault Newman appeared on MSNBC and aired excerpts from a tape that appeared to show Lara Trump offering her a job at $180,000 a year to join President Trump’s 2020 re-election campaign, after she was fired in December 2017.

On the tape, Lara Trump appears to make reference to a New York Times story that reported Manigault Newman was preparing to tell her story, and tells her that could not happen if she joined the campaign.

"It sounds a little like, obviously, that there are some things you've got in the back pocket to pull out,” Trump is heard saying. “Clearly, if you come on board the campaign, like, we can't have, we got to," she continues, before Manigault Newman cuts her off: "Oh, God no."

Trump, who is married to Eric Trump, is heard saying that “I would love if you could, you know, occasionally go do speaking engagements and that sort of thing for us -- I think you’d be awesome doing that.”

Manigault Newman told MSNBC she saw it as an attempt to “buy my silence, to censor me” and claimed it is more proof that what she details in her new book, "Unhinged: An Insider's Account of the Trump White House,” is accurate.

But in a lengthy statement, Lara Trump described the airing of the tape as a “betrayal” -- coming after Manigault Newman was “welcomed into our family as a trusted friend and confidant.”

“When Omarosa was fired by the White House Chief of Staff in December of 2017, my entire family was concerned for her because we had no idea about the basis of her dismissal,” she said. “We still wanted her on our team because we cared so much about her personally.”

She also challenged the significance and framing of the audio:

“Another one of Omarosa’s ‘bombshell’ tapes is a fraud. The discussions about a position with the campaign took place in numerous phone calls over the course of several weeks.

“Woman to woman, I shared a connection with Omarosa as a friend and a campaign sister, and I am absolutely shocked and saddened by her betrayal and violation on a deeply personal level,” she said.

Manigault Newman’s latest leak comes after an onslaught of criticism from President Trump and other White House officials over the book, in which she said she has a number of tapes backing her claims. She already released tapes of discussions with the president and Chief of Staff John Kelly. She has also portrayed Trump as being both racist and mentally unstable.

Along with criticism of Manigault Newman by both Trump lawyer Rudy Giuliani and White House Press Secretary Sarah Sanders, Trump himself has weighed in on the book tour, describing Manigault Newman as “a crazed, crying lowlife” and congratulating Kelly for “quickly firing that dog!”

After Lara Trump’s statement, Trump retweeted a video that showed Manigault Newman praising Trump when she worked for him.

“Thank you for the kind words Omarosa,” he tweeted.