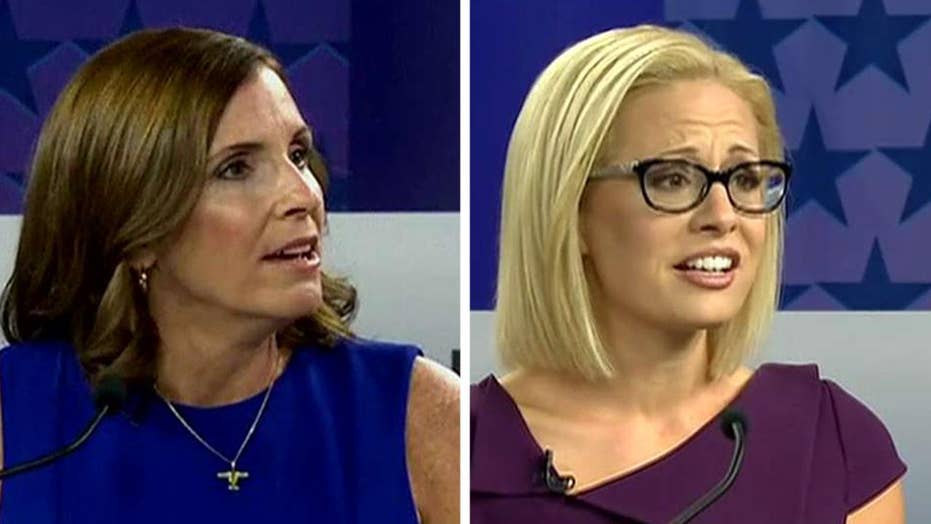 Arizona Democratic Senate candidate Kyrsten Sinema was given a boost Thursday when the Green Party’s candidate dropped out and endorsed her -- a move that could give Sinema an edge over Republican Martha McSally in an airtight race.

"I want [supporters] to vote for a better Arizona, and that would be for Kyrsten Sinema," third-party candidate Angela Green told 12 News. "After watching the debates and seeing everything, Sinema's stance on a lot of things are very similar to mine."

The decision, coming just days away from Tuesday’s midterm election, shakes up the already close race -- where polling has been particularly volatile.

A Fox News poll released this week had the race at a tie, while an ABC 15/OH Predictive Insights poll had McSally ahead by 7. On the flip side, an NBC News/Marist poll had Sinema ahead by 6 in a head-to-head, but that lead cut to 3 when factoring in Green -- who polled at 6 percent. The Real Clear Politics average of recent polls has Sinema ahead by 0.7 percent

Yet it is not clear what impact Green's endorsement will have coming so late in the race. 12 News reports that, while the Green Party candidate picked up 5.5 percent of the vote in 2016, 60 percent of all votes have already been cast by mail-in ballot, and Green's name will remain on the ballot.

It may also provide a difficult messaging moment for Sinema, who has sought to distance herself from her past as an anti-war and Green Party activist, and present herself as a moderate, independent candidate who can buck her party and sometimes vote with President Trump.

McSally has pushed back on that, pointing to a number of controversial statements Sinema made as an anti-war activist and contrasting Sinema’s activism with her own service as a fighter pilot after 9/11.

"While we were in harm's way, she was protesting our troops in a pink tutu," McSally said in a debate last month.

It also emerged last month that in a 2011 speech Sinema implied that her home state produced “crazy” as she advised liberal activists on how to “stop your state becoming Arizona.” In the speech, Sinema recounts how she was taught at a young age that Arizona was known for "five Cs: cattle, copper, citrus, cotton and climate."

Green's endorsement came a day after a similar development in Montana where Libertarian Rick Breckenridge endorsed Republican Matt Rosendale against Democratic Sen. Jon Tester as part of a stand against "dark money" in politics. Fox News Power Rankings has rated that race as "lean Democrat."