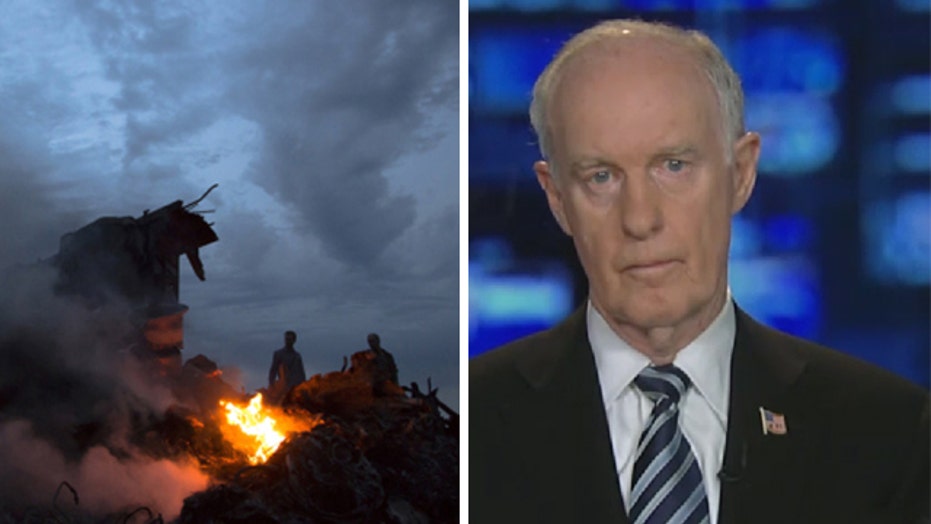 A look at probe into Malaysia Airlines crash in Ukraine

Secretary of State John Kerry on Sunday defended his administration’s measured response to a passenger jet being shot down over Ukraine and mounting evidence of Russia’s involvement, saying the United States shouldn’t “shoot from the hip” while the facts are emerging.

Kerry, the country’s top diplomat, argued the U.S. levied another round of sanctions against Russia one day before the Malaysian airliner was shot down Thursday over eastern Ukraine. And with the exception of ground troops in Ukraine, “all options are on the table,” he said.

The missile attack on Malaysian Airline flight MH 17 was the latest development in the months-long political struggle in Ukraine that includes citizens in February ousting pro-Moscow President Viktor Yanukovych.

In the aftermath, Russian annexed Crimea in Ukraine’s eastern peninsula. And Russian separatists have been battling with the forces from Ukraine’s central government, creating havoc by taking over government buildings and causing other problems.

Kerry, a former prosecutor, on Sunday laid out a series of facts that strongly suggests Russia supplied the rocket launcher that brought down the aircraft -- including evidence of a military convoy from Russia into the launch area, the U.S. tracking of the launch and overheard phone and social-media chatter that appears to show the separatists “bragging” about downing the plane.

President Obama is “prepared to take additional steps,” Kerry told Fox. “Everything, less American troops, is on the table.”

He also put the responsibility on Russian President Vladimir Putin to take the next steps, including cooperating with the investigation of the plane crash, no longer arming the Russian separatists and putting an end to the fighting in Ukraine.

“This is a wake-up call for Putin and Russia,” Kerry said.

He also said the U.S. is trying to get its European counterparts more involved in imposing sanctions, in part because roughly 50 percent of their economy is connected to Russia.

Tennessee Sen. Bob Corker, the top Republican on the committee, said, “I don’t know how anybody could say the response has been anything but tepid and cautious."