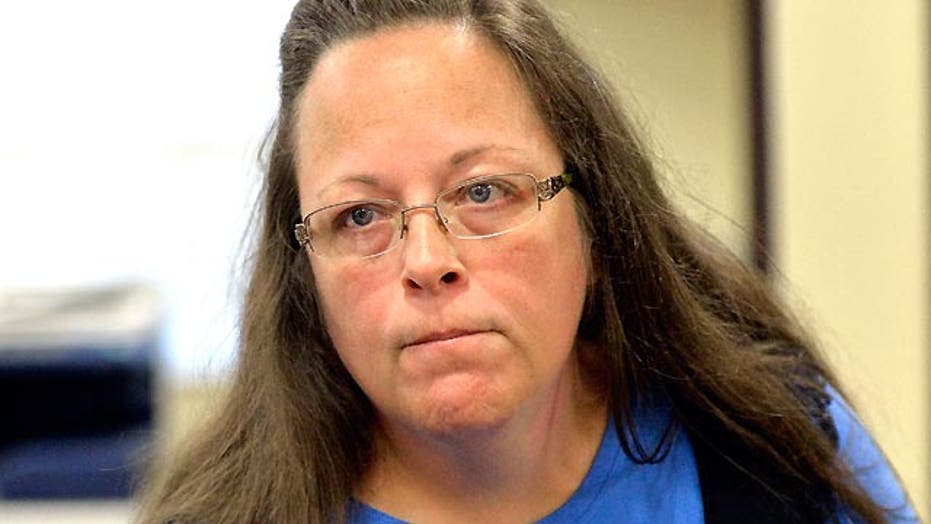 The Republican president of the Kentucky state Senate asked a federal judge on Wednesday to withhold his ruling ordering a country clerk to issue marriage licenses to same-sex couples.

Republican Senate President Robert Stivers says U.S. District Judge David Bunning has to give the state legislature time to pass a law that would exempt Rowan County Clerk Kim Davis from having to issue marriage licenses. However, Democratic Gov. Steve Beshear has refused to call a special session, saying it would be a waste of money being that the controversy only surrounds one clerk.

Nearly all of Kentucky’s laws governing marriage are invalid following the Supreme Court’s landmark ruling in June that legalized same-sex marriage nationwide, Stivers said. For example, Kentucky’s state law requires a couple seeking a marriage license to apply for one in the county “in which the female resides” or in another county so long as the woman applies for it.

Davis has been embroiled in controversy after refusing to issue marriage licenses to same-sex couples over religious reasons. She stopped issuing marriage licenses after the Supreme Court legalized same-sex marriage nationwide. Two gay couples and two straight couples sued her, and Bunning had ordered her to issue the licenses.

However, Davis has refused to obey the order, even though it was upheld in the Supreme Court on Tuesday. The couples named in the lawsuit have urged Bunning to punish Davis by imposing fines against her. Bunning said he will decide that after a court hearing on Thursday, at which Davis is expected to testify.

An attorney for Davis argued on Wednesday that Bunning shouldn’t punish her for disobeying his order because she’s unable to follow it. Jonathan Christman wrote that if Davis were to issue a marriage license to a same-sex couple it would "irreparably and irreversibly violate her conscience." Christman said Davis cannot separate herself from her religious beliefs even while she is an elected official.

"It is not as if Kim Davis the individual stops existing while Kim Davis is performing her duties as Rowan County clerk," Christman wrote.

Christman argued Davis should not be punished yet because she still has an appeal pending before a higher court on a related issue. He also said that if Bunning were to fine Davis for not obeying his order it would amount to criminal penalties that would be illegal because Davis has not exercised all of her rights, including the right to a trial by a jury.

Attorneys for the couples suing Davis have said she should be fined because she continues to earn a taxpayer-funded salary "for duties she fails to perform."