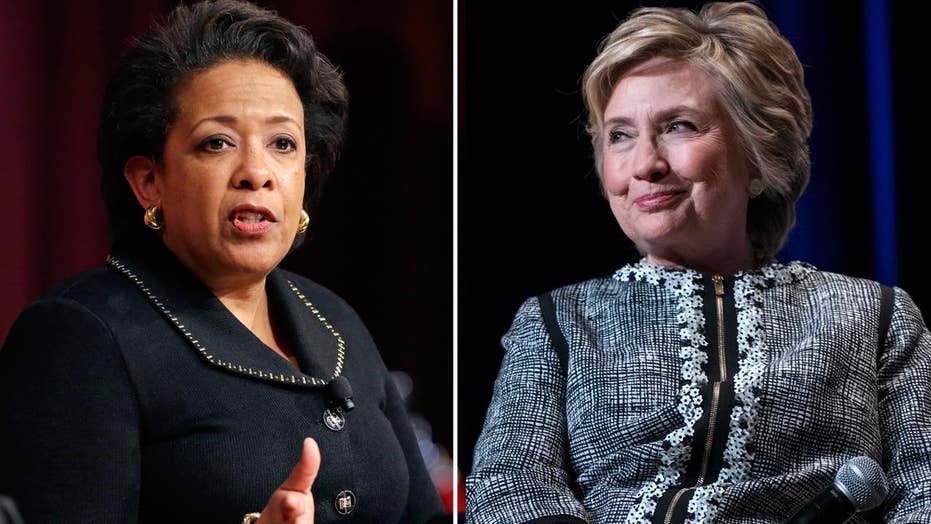 Conservative watchdog group Judicial Watch is clashing with the Trump Justice Department over access to “talking points” the DOJ prepared under the Obama administration to explain the controversial tarmac meeting between Loretta Lynch and Bill Clinton last year.

Judicial Watch is seeking the documents as part of a Freedom of Information Act lawsuit. The group complained late Wednesday that it had received “heavily redacted” emails pertaining to the department's internal preparations last year to press inquiries on the Lynch-Clinton meeting.

The tarmac meeting fueled Republican complaints at the time that then-Attorney General Lynch had improperly met with the husband of an investigation subject, Hillary Clinton, just before the probe into her personal email use was completed with no charges filed. Fired FBI Director James Comey, in Senate testimony in June, described that tarmac meeting as problematic.

Judicial Watch says Peter Kadzik, then-assistant attorney general, was involved in handling the Justice Department’s response to media inquiries regarding the tarmac meeting at the time. But one email exchange shows a redacted response from him to an email with the subject line: “DRAFT: Statement/Talking Points” on June 28, 2016.

Another email shows then-director of the Justice Department Public Affairs Office Melanie Newman emailing with colleagues to “flag a story” about a “casual, unscheduled meeting between former President Bill Clinton and the AG.”

Kadzig did not immediately respond to Fox News' request for comment. Newman’s assistant told Fox News she had no comment.

“President Trump should order the full and immediate release of these materials,” Fitton said. Judicial Watch has begun criticizing Trump administration agencies for “continuing to protect Clinton and the Obama administration.”

While the DOJ does not comment on ongoing litigation, a Justice Department spokesperson referred Fox News to a letter sent by the DOJ Office of Information Policy on Aug. 1, 2017 to Judicial Watch explaining their decision to maintain redacted materials.

A senior attorney wrote to Judicial Watch that “all 315 pages are appropriate for release with excisions made by pursuant to Exemptions 5 and 6 of FOIA.” The letter explains that those sections pertain to “certain inter- and intra-agency communications protected by the deliberative process privilege, and information release of which would constitute a clearly unwarranted invasion of the personal privacy of third parties.”

A Justice spokesperson told Fox News that decisions to claim the deliberative process exemption are routine.

“Judicial Watch must be getting pretty desperate if it is now accusing Trump's own Justice Department of orchestrating a cover-up to protect the Clintons,” Fallon told Fox News.

The meeting between Clinton and Lynch occurred just days before the former secretary of state was interviewed by the FBI about her personal server and email use while leading the State Department. A week later, Comey called Clinton’s actions “extremely careless” but did not recommend charges. The criminal investigation was closed and then briefly re-opened in October prior to the 2016 presidential election.

In his June testimony, Comey cited  concerns with Lynch's handling of the investigation. Comey told lawmakers that Lynch directed him to describe the email probe as a “matter” and not an “investigation.”

Comey said the tarmac meeting was a “deciding factor” in his decision to act alone to update the public on the Clinton probe—and protect the bureau’s reputation.

“That was one of the bricks in the load that I needed to step away from the department,” Comey said, later adding that he was concerned Lynch was trying to align the DOJ’s comments with the way the campaign was talking about the probe. “That gave me a queasy feeling.”

Last month, a group of congressional Republicans called for a second special counsel to investigate Comey, Lynch and Clinton.