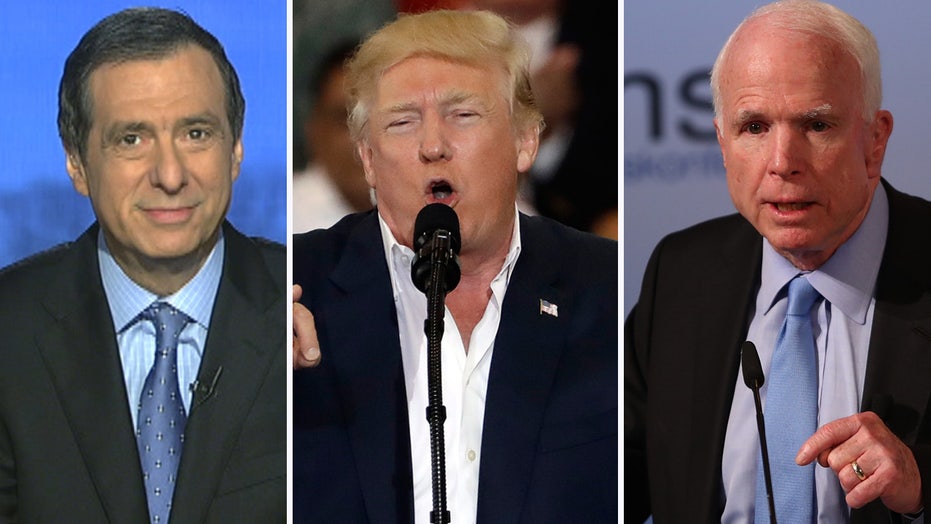 Kurtz: McCain vs. Trump -- It's personal

John McCain is back in his customary role, the maverick adored by the media.

“Mr. McCain has emerged as an outspoken defender of longstanding Republican verities on foreign policy and as one of his party’s most biting critics of the new commander in chief,” says the New York Times.

And there is little doubt that the Arizona senator views himself as standing up for Republican principles against a president he opposed. But make no mistake, this is personal.

McCain walked it back a bit yesterday after having told “Meet the Press” that without a free and adversarial press, “I am afraid that we would lose so much of our individual liberties over time. That's how dictators get started."

The statement from his office said: "Let's be clear: Senator McCain was not comparing anyone to a dictator. He was stating a fact that throughout history, a free press has been essential to holding governments accountable to the people.”

True, McCain only implied that Trump might be headed down the road toward dictatorship.

McCain’s hawkish views on foreign policy, and staunch backing for the Iraq war, set him apart from Trump, who is critical of that war and believes the U.S. has been too quick to resort to military intervention around the world.

Their relationship got off to a bad start during the primaries, when Trump took a shot at McCain’s years in a North Vietnam prison camp: “I like people that weren’t captured.” The media went wild over Trump’s comment, made in reaction to McCain saying that his immigration stance was attracting “crazies.”

At a conference in Germany late last week, McCain said Europeans would be “alarmed by the hardening resentment we see towards immigrants and refugees and minority groups, especially Muslims.” He also noted a growing unwillingness “to separate truth from lies” and that “more and more of our fellow citizens seem to be flirting with authoritarianism.”

The president, for his part, hit back at McCain on Twitter, saying, “He’s been losing so long he doesn’t know how to win anymore.”

McCain skipped the Republican convention, avoided talking about Trump and withdrew even his nominal support after the “Access Hollywood” tape surfaced.

I first got to know McCain during the 2000 primaries, spending endless hours on his Straight Talk Express bus. Since he had no money, the senator would talk to reporters all day long and wound up winning New Hampshire before losing to George W. Bush.

McCain continued to get good press during the Bush administration because he was a maverick taking on his own party. And he got sympathetic coverage during the 2008 primaries—that is, after the pundits wrote him off when his campaign nearly collapsed the previous year.

But when McCain was taking on Barack Obama, the coverage turned far more negative, since he wasn't viewed as a maverick against the country’s first potential black president. McCain limited press access, just like a conventional candidate. And his opposition to Obama’s foreign policy didn’t yield warm reviews from a press corps he had once jokingly called his “base.”

Could the recent surge of media interest in McCain have something to do with the journalistic opposition to Trump? Well, he’s on the cover of New York magazine, the same publication that in its preelection issue branded Trump a “LOSER.”

I don’t see a rapprochement any time soon. Trump has made clear he won’t be dissuaded by critics in his own party. McCain is 80, newly reelected and has nothing to lose. And their clashes could help shape the direction of the next four years.