Former Illinois congressman and radio host Joe Walsh is attracting sudden media attention as he floats a possible GOP primary challenge against President Trump — but the Tea Party-aligned Republican could struggle to be taken seriously as he confronts his own history of conspiracy theories and incendiary remarks.

Walsh penned an op-ed for The New York Times this week in which he called for Trump to face a primary challenge from the right, describing him as "a racial arsonist who encourages bigotry and xenophobia to rouse his base and advance his electoral prospects."

He told CNN Wednesday that he has not ruled out mounting such a primary challenge himself.

At the same time, however, Walsh has had to account for his own rhetoric. In the Times, he wrote: “In Mr. Trump, I see the worst and ugliest iteration of views I expressed for the better part of a decade.”

And on CNN, he apologized “for the role that I played in putting an unfit con man in the White House.”

In this file photo, then-Rep. Joe Walsh, R-Ill., speaks at a news conference with other House Republicans in the Capitol Visitor Center. (Photo By Tom Williams/Roll Call)

Walsh's comments mark a dramatic road to Damascus moment from a man who forged his name as a bomb-throwing, ultraconservative congressman who made racially charged and sometimes violent remarks about former President Barack Obama.

In 2016, he tweeted about why Obama “hates Israel,” concluding falsely that it is because Obama was secretly a Muslim.

“For better or worse, I'm not afraid to say it publicly. I think Obama is Muslim. I think in his head and in his heart he has always been. And I think it explains Obama's hatred toward Israel and explains his weakening of America these past 8 years,” he tweeted.

“It's not complicated,” he added.

Right before the election, Walsh tweeted that if Trump loses, "I'm grabbing my musket."

Earlier in the year, in response to the killing of police officers in Dallas, Walsh told Obama and Black Lives Matter protesters to “watch out” in a tweet that was widely seen as a possible call for violence.

“This is now war. Watch out Obama. Watch out black lives matter punks. Real America is coming after you,” he said in the tweet that he later deleted. He then said that he wasn’t calling for violence, and that he deleted the post after Twitter said it was the only way his account would be unblocked. 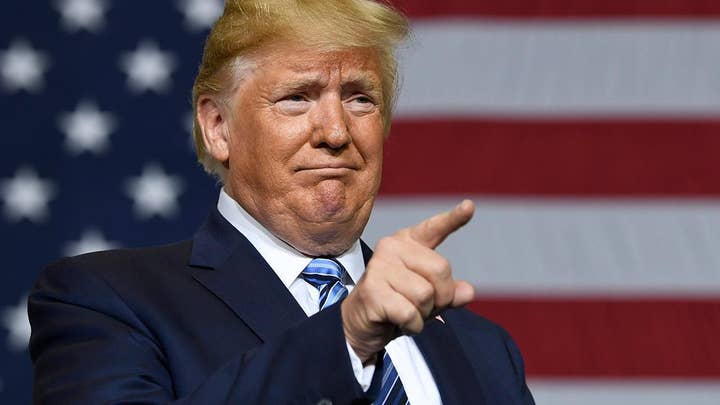 “I wasn't calling for violence, against Obama or anyone. Obama's words & BLM's deeds have gotten cops killed. Time for us to defend our cops,” he said.

In 2015, in the wake of the San Bernardino terrorist attack, Walsh reportedly said: "Islam, as practiced by most Muslims, is not a religion of peace, and all of us who do live in peace should do whatever we can to defeat Islam."

Walsh is now trying to reconcile these statements with his current stance.

In his op-ed for the Times, he said he only voted for Trump in 2016 because “he wasn’t Hillary Clinton” and said that he initially gave him the benefit of the doubt before turning on him.

Walsh claims Trump’s time in the White House has caused him to change his tone and reflect on where he crossed the line.

"Mr. Trump has taken the legitimate differences that Americans have on policy and turned them into personal division. He’s caused me to change my tone and to reflect upon where I went over the line and to focus on policy differences moving forward," he said.

Should Walsh decide to put his own name forward, it would be the first significant challenge to Trump from his right. Most of those who have considered or launched runs, such as former Massachusetts Gov. William Weld, former South Carolina Gov. Mark Sanford and Maryland Gov. Larry Hogan, have positioned themselves as centrist challengers. Hogan has since said he is not running against Trump.

Walsh claims that Trump is more vulnerable to a challenge from the right, but it is far from clear if there is an appetite from Republicans for a right-wing challenge to Trump – and if primary voters would buy Walsh’s dramatic mea culpa and subsequent lectures on “indecency” considering his past remarks.