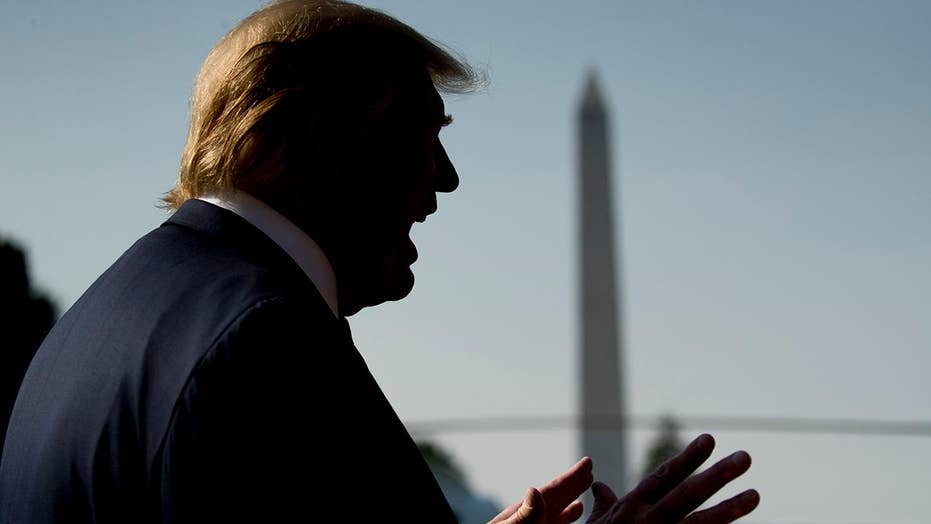 Trump to meet with first responders, victims and families in Dayton and El Paso

The president addresses critics of his rhetoric before departing for his trip; John Roberts reports from the White House.

President Trump arrived at the University Medical Center of El Paso to meet with first responders, medical personnel, and victims on Wednesday afternoon, just four days after 22 people were killed by gunman Patrick Crusius at a Texas Walmart.

The president was greeted at the airport by the state's Republican governor, Greg Abbott, as well as Sens. John Cornyn and Ted Cruz and El Paso Mayor Dee Margo -- who bucked Democrats' calls on Monday to turn the president away.

As happened earlier Wednesday in Dayton, Ohio, scene of another lethal mass shooting this weekend, Trump was greeted by protesters demanding gun control reform and an end to caustic rhetoric — including some from the president — that they believed to be contributing to a culture of violence in America.

On the whole, however, reaction to Trump's visit was welcoming -- and, according to MSNBC correspondent Jacob Soboroff, "surprisingly positive."

Raul Melendez, an El Paso resident whose father-in-law, David Johnson, was killed in Saturday's shooting, said the most appropriate thing Trump could do was to meet with relatives of the victims.

President Trump and the first lady with a victim and medical personnel at Miami Valley Hospital in Dayton, Ohio. [WHITE HOUSE PHOTO]

"It shows that he actually cares, if he talks to individual families," said Melendez, who credits Johnson with helping his 9-year-old daughter survive the attack by pushing her under a counter. Melendez, an Army veteran and the son of Mexican immigrants, said he holds only the shooter responsible for the attack.

"That person had the intent to hurt people, he already had it," he said. "No one's words would have triggered that."

Reporters were not given access to Trump’s visits to the hospitals in either El Paso or Dayton. Instead, the White House released its own photos, tweeted by the president and his staff. The photos did not come from the press pool.

Also in opposition to protests, Vibora Anchondo, the sister of a couple shot to death in El Paso, reportedly wrote on Facebook: "It’s such a shame that two of our local politicians (I refuse to say their names as they don’t deserve it) are saying that our President is not welcome on Wednesday. ...I cannot believe how these monsters are using the tragic event to push their political agenda."

During the flight from Dayton to El Paso, Trump posted photos of himself and first lady Melania Trump visiting wounded patients at a hospital. Trump posed for photos with medical staff and spoke with law enforcement officials, giving a "thumbs up" in one.

Trump tweeted, "The people I met in Dayton are the finest anywhere!"

Trump was kept out of view of reporters at the Miami Valley Hospital in Ohio as he spoke with families and victims of the shootings. Nine people were killed when police say gunman Connor Betts opened fire outside a crowded bar on Sunday.

Outside the hospital, at least 200 protesters, as well as Trump supporters, gathered.

"Just left Dayton, Ohio, where I met with the Victims & families, Law Enforcement, Medical Staff & First Responders," Trump wrote on Twitter, as Air Force One made its way to El Paso. "It was a warm & wonderful visit. Tremendous enthusiasm & even Love."

The president then slammed Dayton Mayor Nan Whaley and "failed presidential candidate" Ohio Sen. Sherrod Brown, saying they had used a press conference to misrepresent what occurred during his hospital visit. Brown told reporters that he had rejected Trump's suggestion of giving awards to police officers, and told the president that "assault weapons" should instead be removed from the streets to protect them.

"It bore no resemblance to what took place with those incredible people that I was so lucky to meet and spend time with," Trump said, referring to Whaley and Brown's comments.

Later, in El Paso, Trump told reporters, "I get on Air Force One, turn on the TV, they said: 'I don't know if it was appropriate for [the president] to be there. They are very dishonest."

Referring to Brown, Trump said, "That's why he failed as a presidential candidate."

Demonstrators chant as they protest the arrival of President Trump in Ohio. (AP Photo/John Minchillo)

"I think the victims and the first responders were grateful that the president of the United States came to Dayton," Whaley said.

Trump aide Dan Scavino said that Trump spent almost two hours with survivors and first responders in Dayton, calling the visit "truly special moments for everyone that was present."

Scavino also attacked Whaley and Brown, saying they were "completely mischaracterizing what took place w/ the President’s visit to Miami Valley Hospital today" and are "disgraceful politicians, doing nothing but politicizing a mass shooting, at every turn they can."

In all, the shootings in Ohio and Texas left at least 31 people dead and dozens injured.

Trump said before departing the White House that the visits are an opportunity to meet with those affected by the shootings and "to congratulate some of the police and law enforcement, the job they've done is incredible, really incredible."

As the motorcade arrived at the hospital in Ohio, one protester held a sign, “End This Terror,” and gave the motorcade a middle finger. Protesters also gathered in front of a “Trump baby” balloon.

Trump has come under intense criticism from Democrats and media pundits in the wake of the shooting for both his alleged inaction on gun control and incendiary rhetoric on immigration -- which critics have linked to the El Paso shooting.

Those critics have cited reports that Crusius was a white nationalist who penned a manifesto against Hispanic immigrants, and said he described the migrants coming across the southern border as an “invasion” of Texas. Trump has used similar rhetoric in his remarks about the migration crisis at the border. 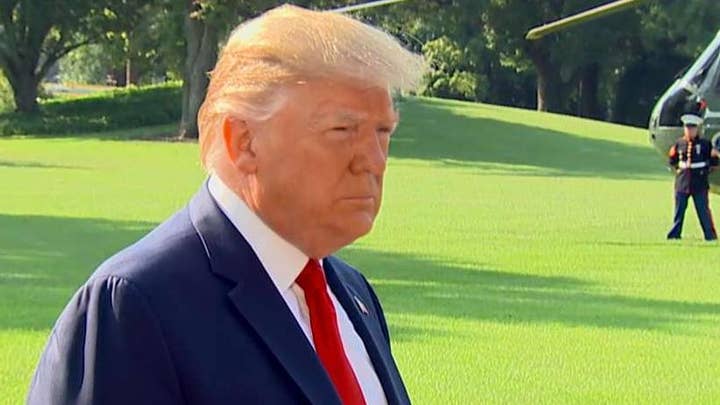 But, speaking to reporters as he boarded Marine One at the White House earlier Wednesday, Trump countered those criticisms by citing reports that Betts -- the shooter in Dayton -- supported Antifa, along with Democratic presidential hopefuls Sens. Bernie Sanders, I-Vt., and Elizabeth Warren, D-Mass.

The Associated Press reported that a Twitter account believed to be from gunman Connor Betts showed tweets labeling himself a “leftist,” bemoaning the election of Trump, supporting Warren and encouraging people to cut fences of immigrant detention centers.

He has also sparred with El Paso native and presidential candidate Beto O’Rourke on Tuesday night -- he told him to “be quiet” after O’Rourke compared his rhetoric to that found in Nazi Germany -- and former Vice President Joe Biden, who compared Trump’s rhetoric to that of former Alabama Gov. George Wallace. On Wednesday, Trump called Biden "incompetent."

However, he also insisted he was trying to stay out of the political fray.

"My critics are political people, they’re trying to make points in many cases they're running for president and are very low in the polls,” he said. “These are people looking for political gain, and I don't think they’re getting it and, as much as possible, I've tried to stay out of it.”

Criticism over too-easy access to guns followed Trump to Ohio, with both protesters and Sen.Brown, D-Ohio, taking Trump to task for what they see as inaction from him and fellow Republicans in Congress.

"We can't get anything done in the Senate because [Majority Leader] Mitch McConnell and the president of the United States are in bed with the gun lobby," Brown told reporters.

Earlier Wednesday, Trump said that there is a “strong appetite” for legislation on background checks in Congress and he had had "plenty of talks" with members of congressional leadership.

“I’m looking to do background checks, I think background checks are important, I don't want to put guns into the hands of mentally unstable people or people with rage or hate, sick people. ... I’m all for it,” he said.

A White House spokesman said that the White House has invited Internet and technology companies for a staff-led discussion on violent extremism online on Friday. The meeting is to include senior administration officials from the White House.

Fox News' Blake Burman and The Associated Press contributed to this report.