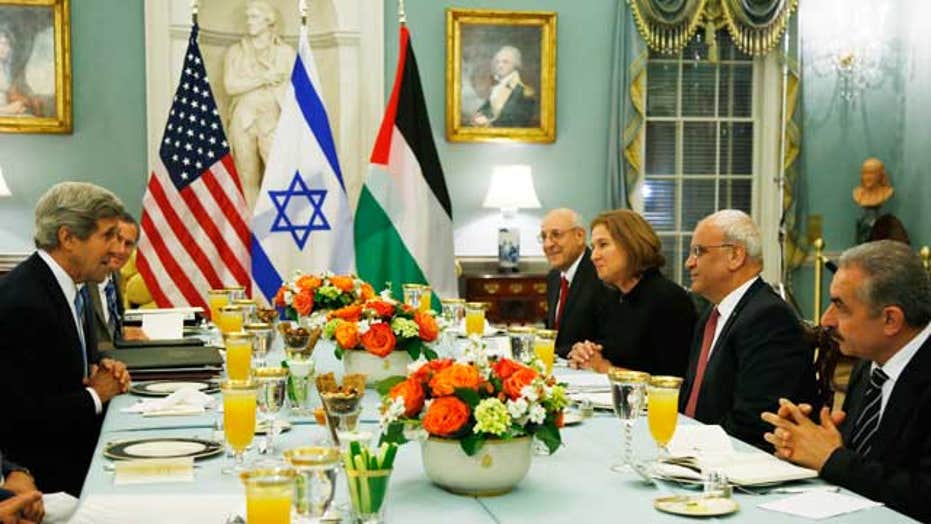 Israeli and Palestinian negotiators agreed Tuesday to meet again within two weeks to start substantive negotiations on a so-far elusive peace deal with the goal of reaching a deal within nine months, Secretary of State John Kerry said.

Speaking as the two sides wrapped up an initial two days of talks at the State Department after paying a visit to President Obama at the White House, Kerry said Israel and the Palestinians were committed to "sustained, continuous and substantive negotiations on the core issues" that divide them. He said the next round of negotiations would take place in either Israel or the Palestinian territories at an as yet-unspecified date before mid-August.

"The parties have agreed here today that all of the final status issues, all of the core issues and all other issues are all on the table for negotiation. And they are on the table with one simple goal: a view to ending the conflict," Kerry said. "Our objective will be to achieve a final status agreement over the course of the next nine months."

U.S. officials had previously said the negotiations would continue for a minimum of nine months without setting that as a timeframe for reaching a deal. Kerry said he was aware of the deep skepticism surrounding the new push for peace and acknowledged that the road ahead would be difficult.

Yet, he said he was hopeful an agreement could be reached. "While I understand the skepticism, I don't share it. And I don't think we have time for it," he said.

"I firmly believe the leaders, the negotiators and citizens invested in this effort can make peace for one simple reason: because they must," Kerry said. "A viable two-state solution is the only way this conflict can end. And there is not much time to achieve it. And there is no other alternative."

Kerry said the negotiations, to be mediated on a day-to-day basis by his new Mideast peace envoy, Martin Indyk, would be cloaked in secrecy and that the parties had agreed that he would be the only person to comment on them. He quickly added that he would not comment on them, leaving unclear the framework for the talks that he struggled for six months to get back on track.

Despite the secrecy, the broad outlines of an agreement are well known: the Palestinians want a state based on the lines, with agreed land swaps, that existed before the 1967 war in which Israel seized east Jerusalem and occupied the West Bank and Gaza. Israel wants security assurances and a recognition that it is and will remain a Jewish state.

Obama laid out those parameters as U.S. policy for any negotiations in a May 2010 speech but neither the Israelis nor the Palestinians has publicly signed off on them. U.S. officials said Tuesday the talks would proceed under the framework Obama announced in that speech but Kerry did not mention that in his comments.

Instead, he said only that the two sides had agreed that all "final status issues, all of the core issues and all other issues" would be on the table for negotiation. Those issues include security, borders, the status of Jerusalem, the fate of Palestinian refugees and water, all of which have been responsible for cratering multiple U.S.-brokered peace efforts over the past two decades.

At the State Department ceremony, Kerry was flanked by Livni and Erekat -- who each spoke briefly about the need to resolve the long-standing conflict.

Livni allowed that she and Erekat had been involved in failed negotiations before, notably the Annapolis Process that former President George W. Bush initiated in 2008, but she said this time could be different.

"You know, Saeb," she said to Erekat, "we all spent some time in the negotiations room ... but we didn't complete our mission. And this is something that we need to do now, in these negotiations that we will launch today. And the opportunity has been created for us, for all of us, and we cannot afford to waste it."

"I believe that history is not made by cynics; it is made by realists who are not afraid to dream," Livni added. "Let us be these people."