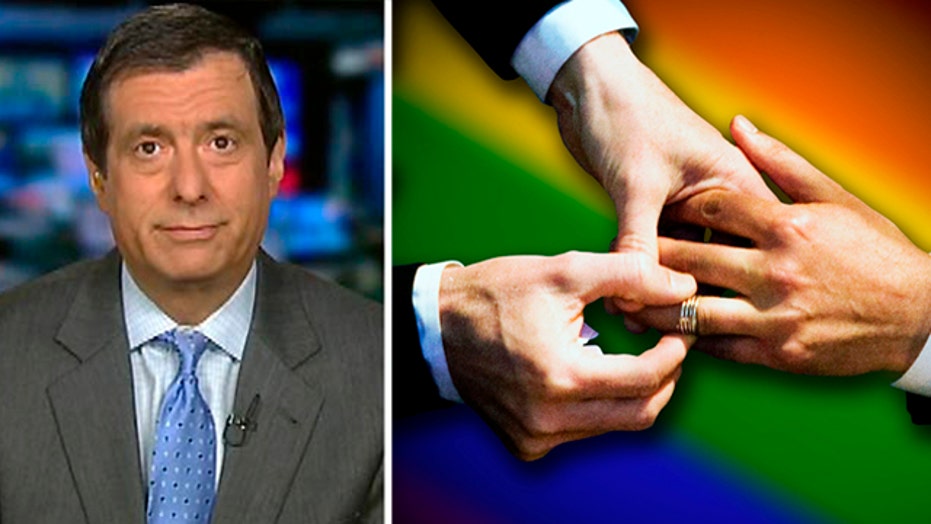 Kurtz: The battle over same-sex marriage is over

After the Supreme Court cleared the way for gay marriage to become legal in 11 more states, I checked out some conservative websites for passionate pushback.

I saw nothing on National Review, other than a link to a Washington Post story: “Is The Fight Over Gay Marriage Effectively Over?”

Hot Air ran four paragraphs. The Daily Caller had a link to CNN’s Jeff Toobin calling it an “outrageous…abdication of duty” that the high court wouldn’t take the cases, allowing lower-court rulings in favor of same-sex marriage to stand.

The Weekly Standard published a short news story that mostly consisted of Ted Cruz ripping the decision as “judicial activism at its worst.”

On an American Family Association show, Mike Huckabee, the Fox News contributor and possible 2016 contender, also spoke out against the decision.

“I am utterly exasperated with the Republicans and the so-called leadership of the Republicans who have abdicated on this issue,” he said, adding that if that doesn’t change, “I’ll become an independent.”

But Cruz and Huckabee are exceptions. The silence on the right is deafening. We haven’t seen conservative commentators on Fox denouncing what the Supreme Court did. And many Republicans are simply ducking the issue.

With public opinion increasingly favoring gay marriage, it seems the conservative movement has essentially surrendered. And with gay weddings soon to be performed in 30 states, that is unlikely to change.

I should stop right here and point out that a major chunk of the country still believes that marriage should be between a man and a woman. Their views should be respected, but are often minimized by the mainstream media, which are undeniably liberal on this issue. And obviously there are still advocates battling this legal trend.

But the Republican National Committee put out no statement on Monday’s ruling, and when MSNBC asked  Reince Priebus about that yesterday, he sounded rather obligatory in saying “I’m not running from that position” against gay marriage. Earlier, Michele Bachmann said gay marriage was “not an issue” in the midterms and pronounced questions about it “boring.”

This is, to put it mildly, an incredible sea change from 10 years ago, when George W. Bush ran for reelection on a constitutional amendment to ban same-sex marriage. And just 2-1/2 years ago, Barack Obama had not yet endorsed gay marriage.

The dramatic shift in public opinion, especially among younger folks, can be traced to the fact that as individual states allowed gays to marry, the sky didn’t fall and people grew accustomed to the idea.

The media coverage—and this was true again this week—tends to play up footage and photos of happy couples celebrating, and that becomes the public face of the story. The same is true as Virginia, Wisconsin, Indiana, Oklahoma and Utah now begin to allow gay marriage in the wake of the high court’s decision.

There has been plenty of  speculation as to why the court couldn’t muster four votes to take any of the cases. Perhaps the conservative wing feared that Anthony Kennedy would help produce a sweeping ruling in favor of gay marriage. Perhaps John Roberts wants to let the legal debate play out further before the high court weighs in. Perhaps, as Ruth Bader Ginsburg has suggested, the liberal wing doesn’t want to impose a definitive ruling on the country as it did with abortion. Or perhaps the justices just wanted to duck.

The aforementioned Washington Post piece pretty much says it’s over:

“The Supreme Court’s surprising move to pass on deciding whether state prohibitions on same-sex marriage violate the U.S. Constitution may reflect two things about the justices: a natural inclination for incremental steps and a worry on the part of conservatives that the battle — for now — appears lost.

“Many observers of the court were stunned that the justices passed up reviewing lower-court decisions that overturned prohibitions on same-sex marriage in five states, delaying a decision that would answer the question for the nation.

“Gay rights proponents took it as a sign that the court likes to move slowly when endorsing momentous societal change, that it feels no need to decide an issue before it must — and that the court’s move provides a clear signal for future challenges of voter-approved prohibitions on same-sex marriage.”

“Republicans didn't want this fight. While polls suggest that a majority of Americans now support same-sex marriage, it doesn't play well with the party's base.  The GOP's political arms declined to comment in the immediate aftermath of the decision.”

But the decision could cut both ways: “The issue's re-emergence in the political debate could also be uncomfortable for a handful of Democrats fighting to hold onto their Senate seats. For example, Senators Mary Landrieu of Louisiana and Mark Pryor of Arkansas both oppose gay marriage, but voters in their socially conservative home states might be convinced to vote Republican in hopes of establishing a GOP majority that would block the expansion of gay rights through legislation or the judiciary.”

A New York Times editorial demands that the court step up:

“The forces against marriage equality are not going down without a fight. In nearly half the country, gay and lesbian couples are still treated as second-class citizens, denied the respect and dignity — as well as the tangible financial benefits — that come with the ability to marry…

“Same-sex marriage is among the most important civil-rights issues of our time, and the country is ready to resolve it once and for all. The justices have all the information they need to rule that there is a constitutional right to same-sex marriage. What are they waiting for?”

Andrew Sullivan, who first made the legal case for gay marriage in a 1989 New Republic cover story, is ecstatic:

“What I…love about this conservative but extraordinary decision from SCOTUS is that it affirms the power of federalism against the alternatives. Marriage equality will not have been prematurely foisted on the country by one single decision; it will have emerged and taken root because it slowly gained democratic legitimacy, from state to state, because the legal and constitutional arguments slowly won in the court of public opinion, and because an experiment in one state, Massachusetts, and then others, helped persuade the sincere skeptics that the consequences were, in fact, the strengthening of families, not their weakening…

“I think of all those who never saw this day, the countless people who lived lives of terror and self-loathing for so, so long, crippled by the deep psychic wound of being told that the very source of your happiness – the love for someone else – was somehow evil, or criminal, or unmentionable… And I cherish America, a place where this debate properly began, a place where the opposition was relentless and impassioned, a country which allowed a truly democratic debate over decades to change minds and hearts, where the Supreme Court guided, but never pre-empted, the kind of change that is all the more durable for having taken its time.”

The legal debate and the grass-roots debate over same-sex marriage will continue. But in light of what the Supreme Court did—or, more precisely, failed to do—the political battle seems to be over.