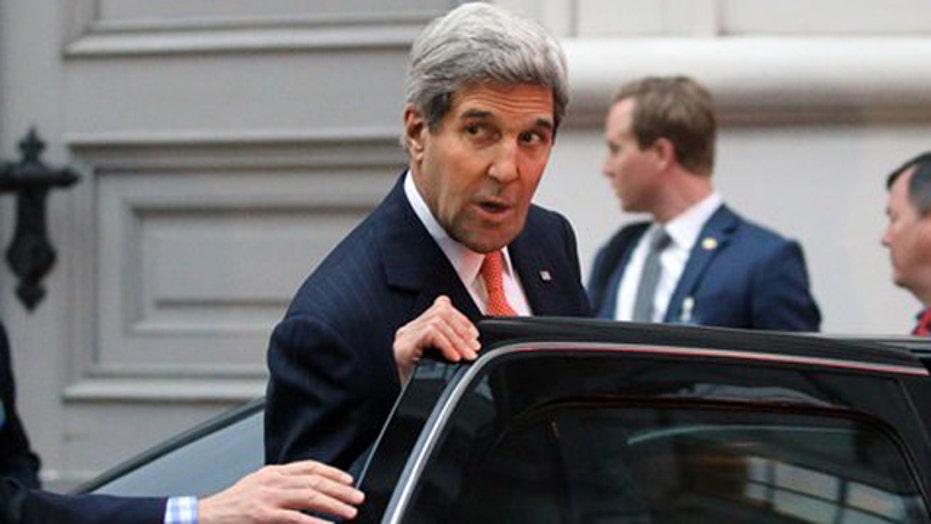 Kerry warns of serious gaps in nuke talks with Iran

Secretary of State John Kerry warned Saturday of "serious gaps" in discussions with Iran about a possible nuclear deal, while a senior Western diplomat has said that the rogue nation has offered no significant concessions on the key issues of enrichment and sanctions relief.

“We have reached a point in the talks where probably we can’t have an agreement without some very significant moves from the Iranians,” the senior diplomat told The Wall Street Journal  on Saturday.

The lack of movement and the presence of major differences make the possibility of extending past Monday's deadline appear more likely.

Discussions on going past that deadline have not begun between Iran and the U.S. — the lead players in negotiations that formally group six world powers on one side of the negotiating table and the Islamic Republic on the other.

One American official familiar with the talks told The Associated Press that the U.S. has not wanted to prematurely raise the possibility of an extension because that could take pressure off the Iranians.

However, as the clock ticks toward the deadline, the official — who demanded anonymity because his information was confidential — said discussion of an extension was inevitable.

The United States — backed by Russia, China, Britain, France and Germany — is seeking a deal that cuts, and puts long-term limits on, Iranian nuclear programs that could be used to make weapons. Iran says it does not want such arms but is negotiating in the hope of reducing sanctions imposed because of its nuclear activities.

Iran has offered small reductions in nuclear-fuel production, but western nations have demanded a more significant cut in nuclear capabilities, while also holding to a strict incremental timetable that would allow penalties to be quickly re-imposed in the event of Iranian non-compliance.

“As Secretary Kerry said this morning, big gaps remain, but we are discussing the broad range of issues and we are continuing to take steps forward. The focus of discussions remains on an agreement, but we are discussing both internally and with our partners a range of options for the best path forward,” a senior State Department official told The Wall Street Journal on Saturday.

In addition to Kerry's note of pessimism on Saturday about the talks, German Foreign Minister Frank-Walter Steinmeier said the sides are "still far apart" on some questions. Success or failure, he said, "is still completely open at this point."

Steinmeier spoke after arriving in Vienna to join Kerry's efforts to move the talks forward and shortly before meeting with the chief U.S. diplomat.

Kerry's outlook on the talks jibed with comments from diplomats familiar with the discussions, who said prospects for a final agreement by deadline appeared slim.

Kerry — who has met repeatedly with Zarif since arriving Thursday — spoke by telephone on Saturday to Arab foreign ministers in the Gulf, whose countries fear Iran's potential abilities to make nuclear arms, and with his Canadian and Turkish counterparts, the U.S. State Department said. He also talked Israeli Prime Minister Benjamin Netanyahu by phone.

Hopes of progress were briefly boosted Friday, with reports that Zarif planned to fly to Tehran for additional consultations. That could have meant possible progress, suggesting that the Iranians need political approval from Tehran to move forward.

Iranian media initially spoke of a new U.S. initiative that Zarif needed to have his superiors approve, but the Iranian diplomat dashed those hopes, saying he was staying in Vienna and had "no remarkable offers and ideas to take to Tehran."