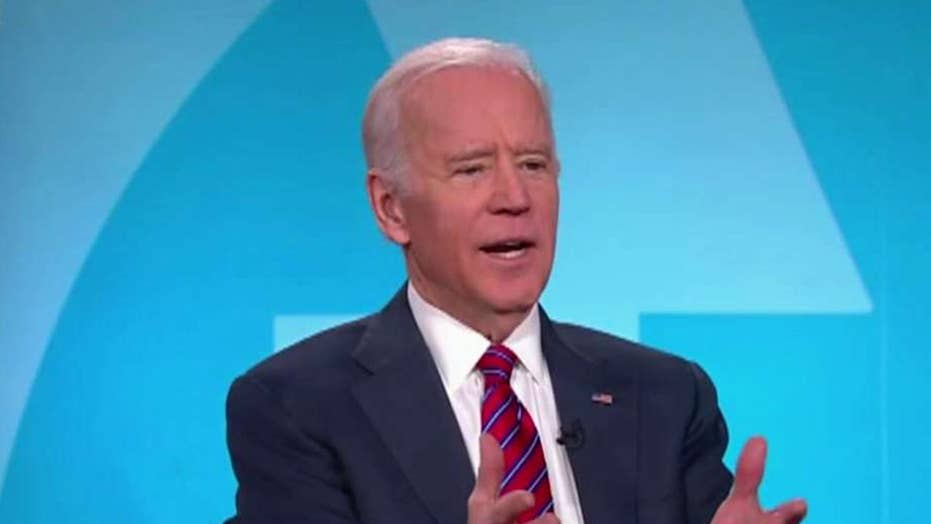 Joe Biden insisted he’s still the front-runner in the Democratic presidential nomination race, downplayed the lack of an endorsement by former President Barack Obama, defended his son’s actions in Ukraine, and called President Trump an “idiot,” as he faced tough questions during an interview broadcast Sunday night on "60 Minutes."

The former vice president – who was the unrivaled front-runner from even before he announced his candidacy in late April – is now tied with Sen. Elizabeth Warren of Massachusetts at the top of many national and early voting state polls.

Biden said he still considers himself the leader in the race for the nomination, emphasizing, “I know I'm the front-runner. Find me a national poll with a notable — a couple exceptions (sic). But look, this is a marathon."

Yet Biden has been underperforming when it comes to another key metric — fundraising. He raised just $15.2 million during the July-September quarter, far behind top-tier rivals Warren and Sen. Bernie Sanders of Vermont. And as of Oct. 1, he had just $9 million cash-on-hand, far behind Sanders – who had nearly $34 million in the bank – and Warren, who had $26 million in her campaign coffers.

Asked by CBS' Nora O’Donnell how he can compete against that, the former vice president answered, "I just flat beat them,” as he laughed.

“We're on a course to do extremely well,” he insisted. “I’m not worried about being able to fund this campaign. I really am not, truly."

Biden was also pressed on the lack of endorsement from Obama, his boss for eight years in the White House.

"I want to earn this on my own," he stressed.

But asked if the former president offered to back him, Biden said, “No, we didn't even get there. I asked him not to. He said, ‘OK.’”

Biden added: “I think it's better — I think he thinks it's better for me. I have no doubt when I'm the nominee he'll be out on the campaign trail for me."

The former vice president took aim at Trump over the president’s repeated comments that Russian interference in U.S. elections is a hoax.

And asked how he would respond to Trump’s accusation that “Joe Biden and his son are stone-cold corrupt,” Biden said, “Let's see how straight you are, OK old buddy? I put out 21 years of mine. So show us your tax returns ... what are you hidin'? You want to deal with corruption? Start to act like it. Release your tax returns or shut up."

As the president faces an impeachment inquiry in the House of Representatives and as support for impeaching and removing the president increases, Trump and his allies have repeatedly tried to put the spotlight on the Bidens. Hunter Biden served on the board of a Ukrainian energy company while his father was vice president. Trump and fellow Republicans have questioned how Biden pushed in 2016 for the dismissal of a Ukrainian prosecutor who was looking into corruption at the company. The prosecutor – who had been widely accused by both Democrats and Republicans of overlooking corruption in his own office – was later dismissed.

Pressed by O’Donnell on whether he considered the optics of his son working for the Ukrainian company during his years in the White House, Biden contended that Hunter was already on the board when he took office.

Biden has said repeatedly that the only thing he asked his son about regarding sitting on the board of the company was, "I hope you know what you're doing."

"I hope you know exactly what you're doing here. That's all I meant. Nothing more than that, because I've never discussed my business or their business, my sons' or daughter's. And I've never discussed them because they know where I have to do my job and that's it and they have to make their own judgments,” he explained.

And Biden took aim at Trump’s daughter Ivanka and son-in-law Jared Kushner,  who serve as top advisers in the administration.

Biden vowed that he if gets “elected president, my children are not going to have offices in the White House. My children are not going to sit in on Cabinet meetings. ... It's just simply improper because you should make it clear to the American public that everything you're doing is for them. For them. And the idea that you’re going to have his children his — son-in-law, etcetera, engaged in the day-to-day operation of things they know nothing about.”

Trump’s reelection campaign defended Ivanka and Jared and took aim at Hunter Biden, saying, “Hunter Biden would never have an office in the White House because he’s proven that his only qualification is being the son of Joe Biden.”