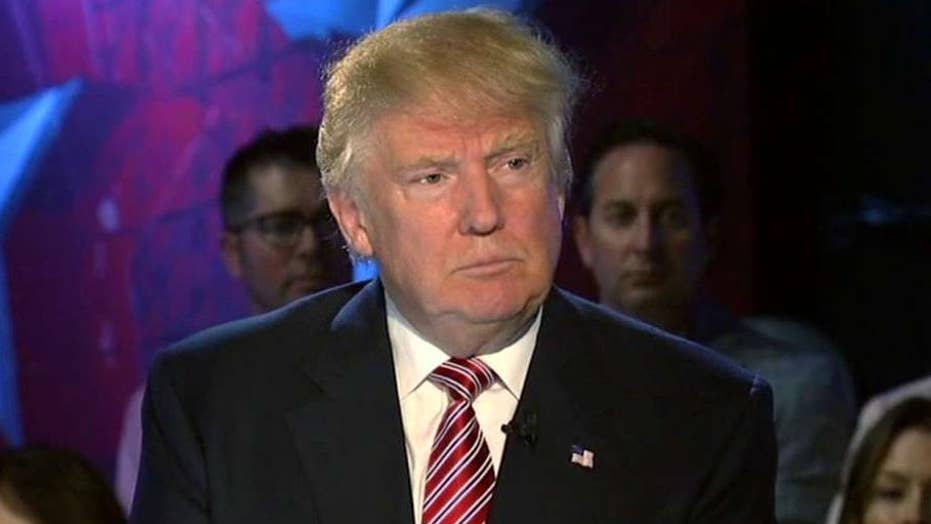 Trump asks his supporters to weigh in on deportation policy

GOP nominee considers path to legalization, not amnesty, for some immigrants at 'Hannity' town hall

In a stark departure from his vow to round up and deport everyone in the country illegally, GOP presidential nominee Donald Trump said Wednesday that he would consider supporting a pathway to legal status for undocumented immigrants.

In a town hall on immigration broadcast Wednesday night on Fox News Channel’s Sean Hannity show, Trump spoke of how across the country, people have told him that it would be hard and unfair to deport undocumented immigrants who have deep roots in the United States, contributing and raising children here.

After polling the audience on whether they prefer deporting everyone or just hard criminals, but giving others who have, other than being undocumented, led largely law-abiding lives here, Trump expressed sympathy for the latter group, and suggested they deserve a chance to make this their permanent legal home.

That is a far cry from the early days of the GOP primaries, when Trump vowed to use a "deportation force" to round up and deport the millions of people living in the country illegally, and appears to be far more in line with the more moderate plans that Trump criticized when they were floated by his Republican primary rivals.

In recent days, he has showed a willingness to soften his tone and stance on what to do about undocumented immigrants. At the same time, he has supported a hard line in some speeches. On Wednesday, for instance, during a rally in Tampa in which he appealed to Latino voters, particularly Puerto Ricans, Trump spoke of making life better for Hispanics who are here legally by cracking down on those who are not, such as visa overstays.

Since he launched his campaign, Trump has enraged many Latinos and other immigrants by denouncing Mexico as a country that dumps rapists and drug dealers on the U.S., and by vowing to take draconian steps to go after undocumented immigrants.

On Wednesday, Trump spoke of working on an immigration plan that he said will be be unveiled in "the next week or two."

In recent days, he has expressed support for a plan that would tighten enforcement, get stricter with people who overstay their visas – who comprise about half of those illegally in the U.S. – aggressively track down and deport criminals, but also have a way for undocumented immigrants who have long ties to the United States and would be an asset to the country to earn legal status by paying back taxes and meeting other, as-yet undefined criteria.

Those points echo the main points of a Senate bipartisan comprehensive immigration reform bill that passed in 2013, but then stalled in the House, where a strong faction of conservatives said they would not support a measure that, in their view, rewarded law-breakers.

Sen. Marco Rubio, a Florida Republican who was part of the bipartisan group, known as the “Gang of Eight,” pushed hard to build support for the measure, going out of his way to say that it was not amnesty, but “earned” legalization.

Proponents of comprehensive immigration reform have generally backed a get-tough approach with criminal immigrants, but a more lenient one with those who have not run into trouble with police and have worked hard and want to legalize their status.

“Look, let me ask you, you have somebody that's been in the country for 20 years, has done a great job, everything else, okay, do we take him and the family, her or him or whatever and send them out?” Trump asked the crowd at the town hall. “They are gone? Or when somebody really has shown, you know, like the merit system other than they did break the law in the first place, okay, and that's a little unfair to people.”

“Do we tell these people to get out, number one, or do we work with them and let them stay in some form?”

To some people in the crowd who cheered for deporting everyone, Trump said he understood their view, but that many people he said he respects had told him it was unrealistic and unfair.

“I understand what you're saying, but this is sort of like a poll and this is what I'm getting all over the country,” Trump said, looking at some of the people who wanted mass deportation. “We are going to come out with a decision very soon. The bad guys are out of here. Now that one we agree on. They are going to be out of here even faster than you can throw them out, I'm telling you.”

“Everywhere I go, I get the same reaction,” Trump said. “They want toughness, they want firmness, they want to obey the law, but they feel that throwing them out as a whole family when they've been here for a long time -- it's a tough thing. They do feel bad.”

“In order to have a productive conversation, Trump needs to clearly articulate his ideas and stop floating trial balloons,” Noorani said. “Center-right leaders already have proposed good, commonsense solutions, and it is increasingly unclear where Trump stands on immigration.”

Those in favor of strict immigration policy said any proposal that grants citizenship to those in the country illegally amounts to amnesty.

“It’s not entirely clear if Trump is actually softening his position but it is clear that he’s fumbling the tricky issue of what’s to be done with the illegal aliens already here,” said Bob Dane, executive director of the Federation for American Immigration Reform (FAIR).

“The problem with amnesty is that it rewards illegal behavior, encourages more and makes a mockery of those legal immigrants who play by the rules.  It also sends the message that the punishment for entering our country illegally varies according to the political whims of the moment rather than the permanency of our [immigration] laws.”