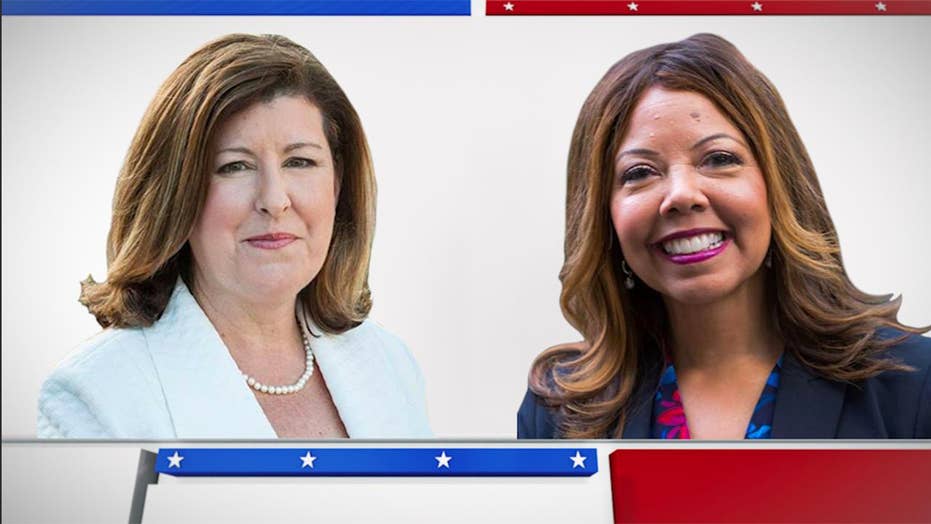 In the suburbs north of Atlanta, two women are vying for Georgia's 6th Congressional District -- both galvanized by personal tragedy.

SANDY SPRINGS, Ga. – Emerging from an early polling location in Cobb County, Democrat Lucy McBath is greeted by hugs and cheers from a group of Atlanta suburban women. McBath pauses quietly, takes a few deep breaths and addresses the media.

“I never imagined I would be voting for myself a third time,” McBath said with her eyes welling up ever so slightly. “I think my son would be really, really proud of me.”

McBath, a Democrat who is fighting an uphill midterm battle in a mostly conservative district, is one of two women vying for Georgia’s 6th Congressional District on Nov. 6 – both candidates galvanized by personal tragedy. Her Republican opponent, Karen Handel, grew up in a home affected by addiction and abuse.

In her first swing at politics, McBath has achieved national attention serving as a beacon for gun control, after her 17-year old son was shot and killed at a Florida gas station in 2012. The white, male shooter was convicted of first-degree murder and sentenced to life in prison during a retrial.

Lucy McBath embraces her son Jordan, who was shot and killed at a gas station in Jacksonville, Fla. in 2012. (Lucy McBath)

If asked six years ago, McBath said she never could have predicted a career in politics, but after losing her son to gun violence, she felt she had no choice but to leave her job as a longtime flight attendant and focus on inflecting change in society.

As a child of civil rights leaders, McBath said becoming a public servant was a natural transition.

McBath brushed off criticism that she was a one-issue candidate.

“Yes, guns is what brought me to stand up politically,” but she reminded critics it is only one of many life experiences that influenced her platform.

“As a two-time breast cancer survivor, I know firsthand what it’s like to be dealing with your own mortality,” McBath said, adding that she wants to expand Medicaid and improve and protect the Affordable Care Act.

But the odds are stacked against the gun control and Medicaid advocate as she attempts to break into the Republican stronghold. The 6th District has remained red for nearly four decades, serving as the political launch pad for Republicans, including Newt Gingrich, Johnny Isakson and Tom Price.

Handel, the incumbent for just one year, narrowly defeated Democrat Jon Ossoff in a special election in 2017 – a race that shattered fundraising records for a House contest.

Handel said, she too, has overcome hardship, after fleeing abuse in her home at 17-years-old. She is motivated to solve the opioid crisis because, she said, she witnessed her own mother's addiction to alcohol.

Handel called her climb to Congress an example of the “great exceptionalism of the United States of America,” demonstrating to underprivileged children that “the circumstances in which a young person grows up in does not have to dictate what your future is.”

The self-described lifelong conservative currently serves on the House Judiciary Committee and the House Education and the Workforce Committee.

Handel, a former business executive, centers her campaign around the status of the economy, promising to continue providing more jobs and building a better small business environment.

“This is the direction of our country, do we want to keep going in this really robust positive direction?” she asked, referencing tax cuts. “Or, do we want to see the chaos that the resistance movement is going to bring?”

On behalf of Handel, the National Republican Congressional Committee is pouring a whopping $1.4 million into the district’s race, making the announcement just three weeks ahead of midterms. Some experts said the timing suggests the race may be closer than initially perceived.

“I think the contribution says that the NRCC wants to assure Karen Handel can win the race, and that they believe it is a close enough race right now that they’ve got to do what they can to help Karen Handel,” said Bill Nigut, a political anchor for Georgia Public Broadcasting.

Handel slammed McBath for her out-of-state monetary contributions influencing the race. McBath’s former employer, Everytown for Gun Safety, poured more than $3.5 million into the 6th District, according to the Center for Responsive Politics.

On the flip side, McBath accused Handel of being “bought” by gun lobbyists. In a debate this week, McBath said Handel continues to “turn a blind eye to what 90 percent of people agree upon…background checks for all gun sales.”

When repeatedly asked to answer “yes” or “no” to universal background checks, Handel told Fox in a sit-down interview: “I support strengthening the instant background check system, which is exactly what we have done.”

Analysts point to the district’s fast-changing demographics to explain its shifting political landscape.

Michael Owens, chairman of the Cobb County Democratic Party, said the area’s demographics have definitely changed – but not just racially. The district is attracting native Georgians from other parts of the metro area, he told Fox News in a phone interview, “changing the dynamics of the district, enhancing the district.”

“At the end of the day, people care about what’s happening with their families, and that goes across every demographic, that is not anything driven by race,” Handel said.

Nigut said the race is too close to call at this point, but noted a win for the Democrats would send a “shockwave” across the country.

“If suddenly a Democrat were to win in that district," Nigut said, "now it tells Republicans that they better figure out how to attract some of those newer, more diverse voters if they want to be able to maintain their advantage in districts like the 6th across the country.”