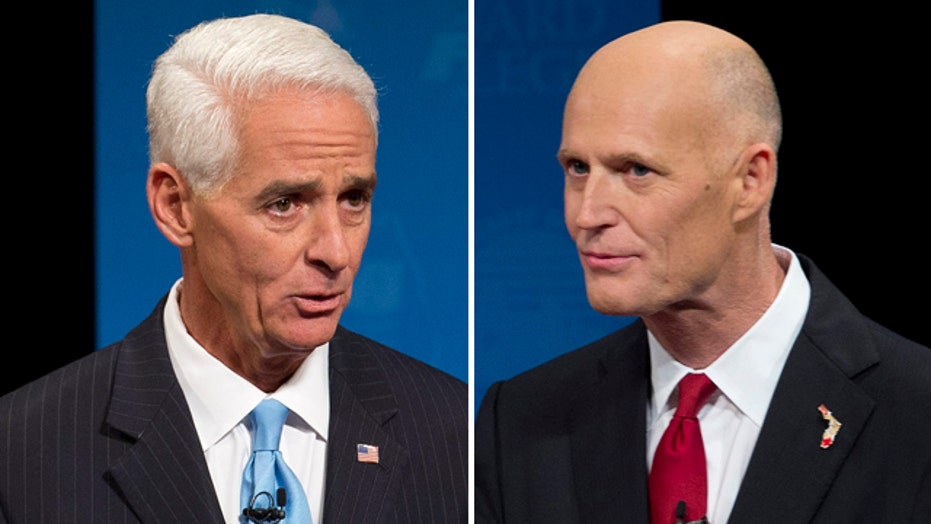 It was much ado about a fan.

In one of the most bizarre starts to any modern political debate, a forum Wednesday night between Florida Republican Gov. Rick Scott and Democratic challenger Charlie Crist was initially held up due to a dispute over a personal fan that Crist wanted underneath his podium.

Apparently, Crist, who used to be the state’s governor as a Republican, likes to have a fan to keep cool under the harsh political spotlight. In fact, he frequently requests a fan be placed under the lectern at debates and speeches.

However, Scott’s campaign claimed this time, Crist was trying to use a fan in violation of the rules of Wednesday’s gubernatorial debate. And, according to the moderator, the governor wouldn't stand for it and at first refused to come out from backstage to begin the event -- though Scott's campaign now disputes this account.

In the opening minutes, the debate began with moderator Elliot Rodriguez of CBS Miami noting that neither candidate was on stage. After a few minutes of awkward silence, Rodriguez announced that in an “extremely peculiar situation,” both candidates were refusing to come out.

At that moment, Crist appeared. Rodriguez then announced Scott would not be joining him.

“Let me explain what this is all about,” Rodriguez said. “Governor Crist has asked to have a fan, a small fan, placed underneath his podium. The rules of the debate that I was shown by the Scott campaign say that there should be no fan. Somehow there is a fan there, and for that reason ladies and gentlemen I am being told that Governor Scott will not join us for this debate.”

Crist then attempted to speak, but was cut off by Rodriguez. When asked by another moderator if the debate rules forbade a fan, Crist said he wasn’t aware of any. That moderator, Rosemary Goudreau of the South Florida Sun Sentinel, said Scott was citing a rule that said no electronics could be used.

After almost five minutes, Scott relented and came out on stage and Crist was allowed to keep his fan.

After it was all over, the matter of the fan became a matter of political spin, with each side mocking the other over the disagreement.

Scott's campaign claimed the governor "never refused to take the stage," but rather was under the impression Crist was still in an "emergency meeting" with organizers "pleading for his precious fan."

The Scott campaign -- putting out a memo titled "The Crist Hits the Fan" -- later said they don’t care what Crist brings to the debate after all.

“Charlie Crist can bring his fan, microwave, and toaster to debates - none of that will cover up how sad his record as governor was compared to the success of Rick Scott," Scott spokeswoman Melissa Sellers said in a statement. "Crist should buy a fan for the 832,000 Floridians who lost their jobs while he was governor.”

During the debate itself, the candidates disagreed on gay marriage and Florida's "stand your ground" law, as well as how their opponent has handled education and the environment. They also blamed each other for rising utility costs.