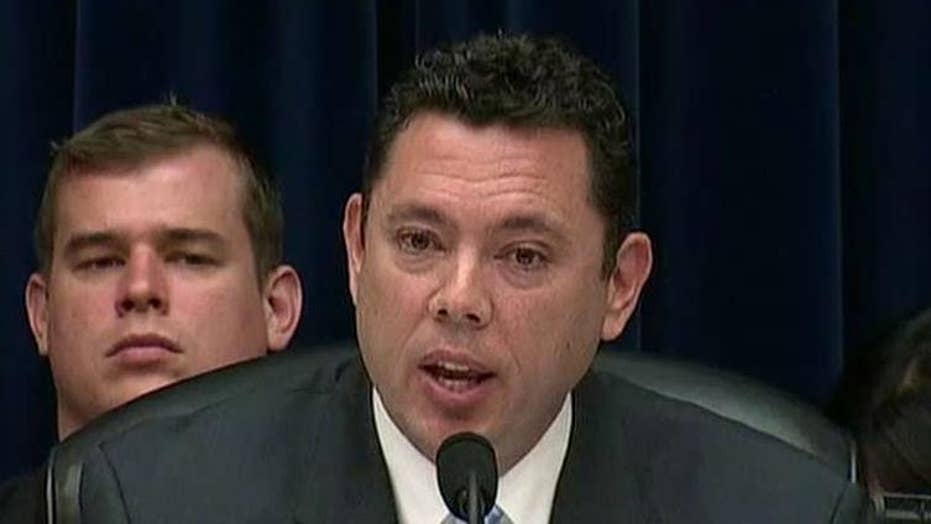 House hearing held on release of criminal aliens in 2015

The Obama administration took fire at a House hearing Thursday for releasing back into society thousands of illegal immigrants who had committed crimes on U.S. soil – including those behind more than 200 murders.

“These are people that were here illegally, got caught committing a crime, were convicted of that crime and instead of deporting them, they were just released back out in the United States of America,” House Oversight and Government Reform Committee Chairman Jason Chaffetz, R-Utah, said.

According to a new report from the Center for Immigration Studies, Immigration and Customs Enforcement in 2015 “freed 19,723 criminal aliens, who had a total of 64,197 convictions among them.”

ICE Director Sarah Saldana defended her agency, even characterizing the statistics as an improvement while claiming they were being politically manipulated.

“I can’t tell you how disheartening it is to hear a very important issue being bandied about as a political football,” Saldana said. “I would ask we focus on solutions rather than political banter.”

Saldana described the number of releases in 2015 as an improvement over prior years. The agency also made modest gains in detaining illegal immigrants but still released nearly 20,000 criminal offenders last year who had been convicted of crimes ranging from arson to embezzlement to sexual assault, according to the CIS report.

The report also said dozens of freed criminals were later charged with homicide as well. Among the murders detailed was that of Grant Ronnebeck, an Arizona convenience store clerk. He allegedly was killed over a pack of cigarettes by an illegal immigrant -- who had been facing deportation proceedings following a burglary charge, but was released on bond.

And more recently, Iowa woman Sarah Root was killed in January, allegedly by an illegal immigrant drunk driver. The suspect was later bailed out and disappeared.

Though the total number of 2015 releases is lower compared to the past two years, the rate of releases is about the same, according to the report. Of the crimes on record, 12,307 involved drunk-driving convictions; 1,728 were cases of assault; and 216 were kidnapping cases.

Saldana also pushed back strongly on accusations from Chaffetz that ICE had a choice when releasing many of the immigrants with criminal convictions.

“To sit there and say that the proud women and men of law enforcement and ICE are choosing to release criminals is absolutely unforgiveable,” she said. “They do not go around trying to put criminals on the streets.”

Chaffetz, though, accused ICE of manipulating the data and knowingly giving criminals a get-out-of-jail free card.

“There is a whole list of categories there that are a harm to public safety, including those that commit homicide, that you went ahead and released anyway,” he said. “And so that law is crystal clear. You are making these discretionary choices and released these people out in the public and they are committing more crimes.”

Part of the problem, though, is the level of cooperation from other countries.

Democratic Rep. Carolyn Maloney focused specifically on the case of 41-year-old Jean Jacques, a Haitian national convicted in the June 2015 killing of Connecticut resident Casey Chadwick. Jacques had a previous attempted murder conviction and should have been deported, but Haiti would not take him back.

“This is such an injustice,” Maloney said. “That they will not abide by their treaty … that they won’t take their felon back.”

There was also a contentious exchange between Saldana and Rep. Jim Jordan, R-Ohio, over the fact that agency discretion -- as opposed to court orders -- prompted many of the releases.

“You just decided, we’re not going to follow the law, we’re going to release them,” Jordan said.

Saldana maintained she follows the law and the illegal immigrants who were released were freed only after “careful analysis.”

“I’m guessing the families here would disagree with your careful analysis,” he said.

Saldana responded, “We are humans and we do fall short sometimes.”