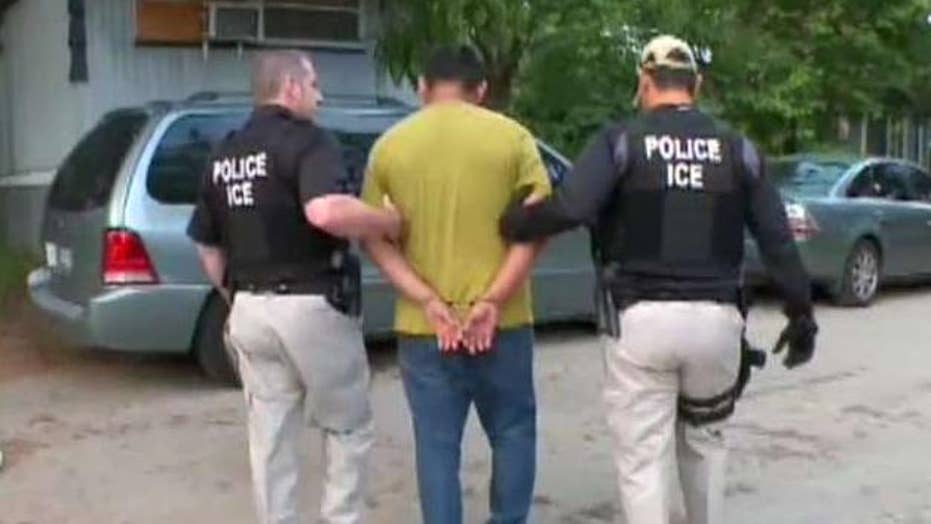 Don Bongino weighs in on orders from some local mayors who have directed their law enforcement officials to not help federal agents with ICE deportation raids.

As the Trump administration engages in an operation to locate and deport illegal immigrants across the country, U.S. Immigration and Customs Enforcement has released a report meant to illustrate the necessity for removing those who have committed crimes.

The first of what will be quarterly “Declined Detainer Reports” details incidents from the second quarter of fiscal year 2018, where law enforcement agencies arrested undocumented immigrants, ignored ICE requests to hold them until federal authorities could pick them up, and then those individuals were arrested on new charges. The report features highlighted cases, including ones where the arrests were for rape, murder, assault, burglary, car theft, drug possession, and DUI.

“Cooperation between ICE and state and local law enforcement agencies is critical to the effort to identify and arrest removable aliens and defend the nation’s security,” the report says.

ICE detainers inform law enforcement agencies that they intend to pick up an individual who is in local, state, or federal custody due to probable cause that the person is subject to deportation. A detainer tells the agency to give ICE at least 48 hours’ notice before releasing them, and holding them for up to 48 so that ICE can pick them up.

Sanctuary cities and states do not comply with these detainers as a matter of policy, and ICE’s report claims that this creates the need for larger-scale operations, such as the one being carried out this week. The report points out that this ends up being more dangerous and costly for the government.

“At-large enforcement actions can carry greater safety risks when compared to taking an alien into custody in the secure and controlled environment of a jail where, for example, individuals have been screened for weapons,” the report says. “Ultimately, a jurisdiction’s decision to ignore ICE detainers increases the need for ICE’s presence in communities and requires additional resources to locate and arrest removable aliens. This consumes significant investigative hours and strategic operational planning, which may or may not be successful.”

In the cases described in the report, three of the individuals were eventually caught by ICE and removed from the U.S., one is believed to again be in law enforcement custody while ICE awaits action on a new detainer, and 12 are believed to still be at large.

In one such case, ICE says an illegal immigrant had been arrested and released 10 times by San Francisco police between February 2018 and January 2019, despite ICE issuing detainers. Each of those arrests included charges related to either burglary or a stolen vehicle.

WHY THOSE ICE RAIDS ARE BEING ANNOUNCED IN ADVANCE

The Trump administration’s wave of ICE operations began overnight in "several jurisdictions" across the country, an official confirmed to Fox News after New York City Mayor Bill de Blasio claimed that they were already taking place on Saturday in his city.

ICE Acting Director Matthew Albence said Friday that targets were on an "accelerated docket" of immigration court cases for predominantly Central Americans who recently arrived at the U.S. border in unprecedented numbers. Similar operations occurred in 2016 under President Obama and in 2017 under President Trump.