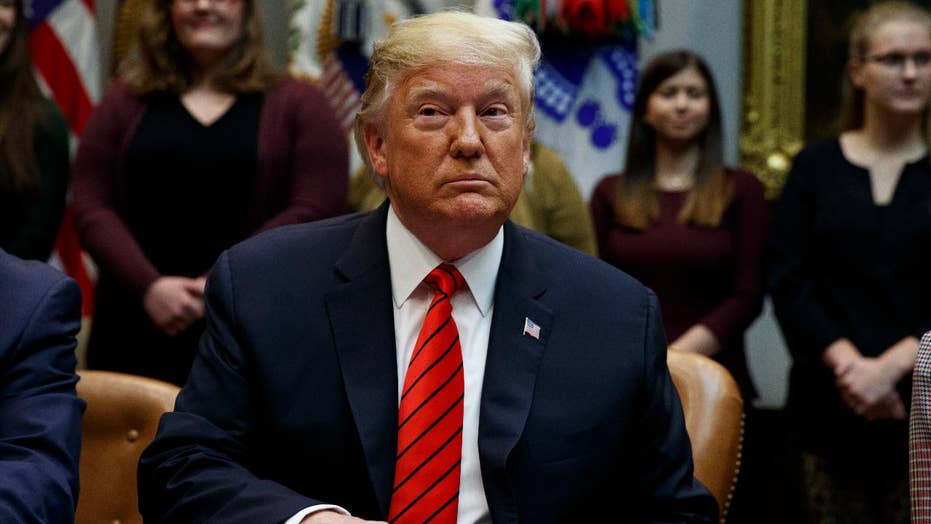 Democrat lawmakers continue to interview witnesses behind closed doors as House Speaker Nancy Pelosi confirms there are no plans to hold a formal vote authorizing the impeachment inquiry.

Ukraine has been thrust into the limelight as the country of interest at the center of the Democratic-led impeachment inquiry in the United States — but inside the embattled country, that controversy has mostly been overshadowed by more pressing internal issues.

Ukrainians' eyes are focused on their own issues of security and survival, far from the drama unfolding around the Capitol. Some are lamenting that Ukraine’s long-running association with corruption is now front and center on the international stage.

“In Ukraine, very few people are versed in the matter deeply,” said Alexey Pristup, a 23-year-old television host in the Ukrainian city of Odesa. “I’m angry Ukraine was dragged into this. It spoils (our) image.”

ANDREW MCCARTHY: THE TRIVIALIZATION OF IMPEACHMENT IS SERIOUS -- IT HAS CONSEQUENCES THAT THREATEN LIBERTY

The scandal unraveled last month after it was revealed a whistleblower filed a complaint against President Trump in the wake of a July 25 phone call with Ukrainian leader Volodymyr Zelensky. That triggered the question of whether the U.S. president delayed sending military aid to Kyiv as part of a more significant push to advance personal interests and pressure the government to investigate the dealings of potential 2020 political rival Joe Biden’s son Hunter who served on the board of a major energy company.

In this Oct. 11, 2012, file photo, Hunter Biden waits for the start of the his father's, Vice President Joe Biden's, debate at Centre College in Danville, Ky. In 2014, then-Vice President Joe Biden was at the forefront of American diplomatic efforts to support Ukraine's fragile democratic government as it sought to fend off Russian aggression and root out corruption. So it raised eyebrows when Biden's son Hunter was hired by a Ukrainian gas company. (AP Photo/Pablo Martinez Monsivais, File)

In the days after Kiev’s role in the burgeoning Washington scandal was unveiled, the issue hit the headlines across Ukraine. While it has maintained a steady stream of related news and op-eds, most on the ground contend that their focus – and that of their press – is centered on more pressing domestic issues.

“Impeachment is an American-only concern and not really a massive issue in Ukraine, and will probably stay that way so long as it doesn’t impact current U.S. policy toward Kyiv,” Christopher Hartwell, a professor at Bournemouth University in England and the former president of the Eastern European-focused Center for Social and Economic Research, told Fox News.

Indeed, observers say that the political drama engrossing Washington circles is primarily only discussed by academic, business, and political elites and is far from the mind of average Ukrainians.

“Other issues related to corruption, land reform, economic relations, and updates from the war are dominating Ukraine news cycles...and I am sure (President) Zelensky and Ukrainians know that Democrats are just using them as pawns in U.S. political posturing,” Hartwell said.

The attention has, however, prompted some in the country to reflect on the past administration’s handling of the Ukraine situation and cast scrutiny on the Biden name -- a name not necessarily widely known in the nation of 45 million and deemed the poorest in the region.

While his father served as vice president of the United States and was tasked with overseeing Ukrainian matters, Hunter Biden was controversially elected to the board of Ukrainian private gas company Burisma, despite a lack of experience in the energy arena and questions over conflicts of interest.

“Vice President Joe Biden, who was President Obama’s point person regarding Ukraine since at least 2009, was perceived as a fighter against corruption,” said Kenneth McCallion, a former federal prosecutor and expert on organized crime, who represented former Ukrainian Prime Minister Yulia Tymoshenko and U.S. business interests in Ukraine. “But Ukrainians think it was inappropriate for Hunter to be on the board of Burisma.”

Viktor Panchak, a risk assessment in security specialist in Kyiv, echoed the sentiment that only a small fraction of the more privileged sector of the population is engaged in following the impeachment proceedings, but that those within the energy sector have long abdicated decisive views pertaining to Hunter Biden’s foray into the industry by joining the board in April 2014.

“There was a change when he joined the board, Burisma was treated as special,” Panchak acknowledged. “It was given top coverage by politicians. There is no fog without fire in this country.”

And the name Biden is one that elicits a mixed response.

“(Joe) Biden is a clever man with somewhat fraudulent leanings, but everyone is acting in the own interests of one’s families,” conjectured Valentina Iliana, a 49-year-old from Odessa.

Nonetheless, Trump seemingly maintains a steady and robust support base in Ukraine; many Ukrainians asserted, primarily borne out of distrust for the previous administrations.

“Many Ukrainians were disappointed that the Obama administration didn’t do more to help their country after Russia invaded in 2014. Kyiv repeatedly asked the Obama White House to deliver lethal weapons – the Javelin anti-tank missile, specifically. But the move was not approved until Trump took office,” said Nolan Peterson, a Ukraine-based correspondent for The Daily Signal, a news platform run by The Heritage Foundation. “The impeachment story is far from the biggest story in Ukraine. Joe Biden is not a household name in Ukraine.”

Being connected to something akin to a Washington furor has some Ukrainians frustrated and on-edge. Issues of malfeasance and judicial independence from political powers remain sensitive matters.

“The situation with Trump and possible impeachment doesn’t really worry Ukrainians now,” observed Serhii Shpota, a 29-year-old web developer who hails from the Russia-occupied region of Lugansk. “I had never heard of Biden before this scandal, but I definitely don’t want Ukraine to be a bargaining chip in American politics.”

According to Todd Rosenblum, a former senior Obama administration official, and Senate intelligence committee staffer, being catapulted into the limelight is making many in Ukraine “very nervous.”

“They are used to a political system with a fair amount of corruption, and a history of going after political opponents. It has got to be discouraging for them,” he said. “And they’re looking at the big picture of what is going on say in Syria, and with the U.S. pulling out so abruptly, how confident are they in (U.S. protections). They don’t have any other options.”

Yulia Vovkodav contributed to this report.