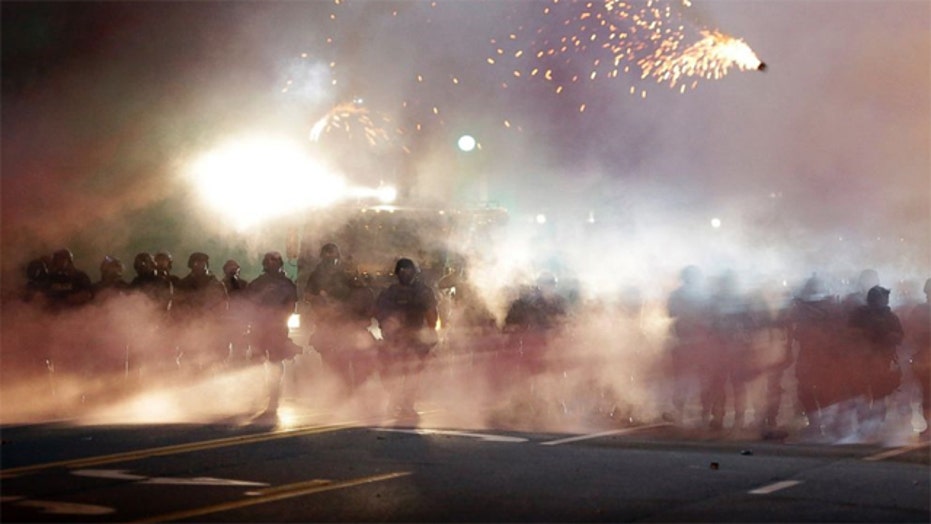 The arrest of two reporters in a McDonald’s in Ferguson, Mo. was a turning point in the coverage of Michael Brown’s death, but not for the reason you may think.

It’s not that the public was outraged that a couple of scribes got roughed up by the cops and taken to jail on trumped-up charges that were quickly dropped. What happened instead is that against the backdrop of officers in riot gear firing tear gas at protestors (and an al-Jazeera crew), the police suddenly seemed out of control.

Until that moment, the events in Ferguson were following an all-too-familiar script. You had a predominantly white police department in a heavily black town. A white officer shot and killed an unarmed black 18-year-old. The African-American community exploded in anger and riots erupted, followed by a police crackdown.

In fact, as USA Today points out in a helpful bit of reporting, a white police officer killed a black person nearly twice a week over a seven-year period ending in 2012. Some 18 percent of the blacks killed during that period were under 21, compared to 8.7 percent of whites.

As stunning as those figures are, they suggest that the police-vs.-protestors story line in the aftermath of such a killing—with excesses on both sides—has, sadly, become a familiar part of American culture.

But when the police handcuffed Washington Post and Huffington Post reporters for the so-called crime of not leaving a McDonald’s quickly enough—and roughed them up in the process—it was a clear signal that at least some officers were being overly belligerent. While I would have gotten my butt moving faster, these were basically a couple of guys trying to do their jobs. The town’s police chief said he didn’t know why Wes Lowery and Ryan Reilly had been arrested.

Soon the number of stories about the images of officers in riot gear being all too reminiscent of the civil rights battles of half a century ago reached critical mass. The next day, President Obama spoke out against the arrests and bullying of journalists in Missouri. Gov. Jay Nixon replaced the local commander with Capt. Ron Johnson, an African-American who grew up in the Ferguson area, who impressively softened both the tone and the tactics of the police response. That night, there were no arrests.

In that sense, while the national media spotlight tends to exacerbate such racially charged situations, the coverage overall has been healthy. We needed to see what was happening on the streets of Ferguson. Yes, Al Sharpton took his usual approach of appearing with the Brown family at a news conference, then interviewing them on his MSNBC show, then speaking at a gathering yesterday, but at least he denounced the violence.

My one concern in those early days was that because the police were saying so little, we were mainly getting one side of the story: from the understandably distraught family that was robbed of their son, from their allies and from angry protestors. Yet we still had virtually no idea what happened with the actual shooting.

On Friday, the optics of the story changed when the police chief identified the officer who shot Brown as Darren Wilson and released (supposedly in response to media FOI requests) security footage of Brown intimidating a clerk at a convenience store and walking out with some cigars. He looked like a thug.

The footage so dominated cable news that it was easy to forget what happened hours later: Skeptical reporters got Police Chief Tom Jackson to admit that Wilson did not know of the robbery case when he fired those shots. Instead, he stopped Brown for jaywalking.

The Brown family branded it character assassination; we don’t know whether it affected his actions during the fatal encounter. But of course it’s had a dramatic impact on public opinion, as the Ferguson cops knew it would—and while it’s undeniably news, television should not be using it as video wallpaper.

The images have been so powerful in this story, and over the weekend they turned ugly again, as looting erupted, many protestors defied a curfew and one person was shot. Now many viewers who might have thought the local police were overmilitarized and overreacted to demonstrators got to see what they were up against.

We’d all like to see things calm down in this Missouri town. I hope the big media presence there isn’t making that more difficult.