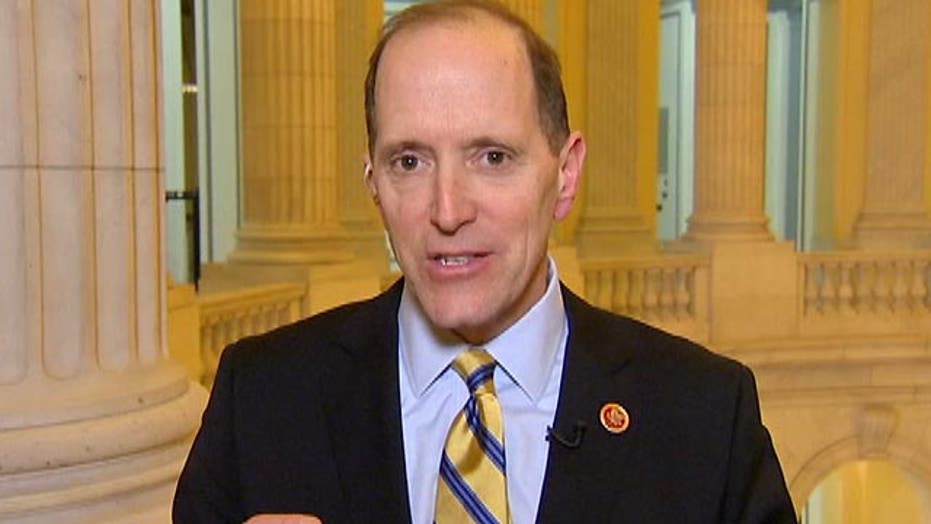 A pitch to rewrite the tax code unveiled

WASHINGTON – House Republicans on Wednesday unveiled a comprehensive overhaul of the nation's convoluted tax system, urging their colleagues to once and for all hammer out a simpler tax code -- but running into skepticism from party leaders out of the gate.

House Ways and Means Committee Chairman Dave Camp, R-Mich., wrote the plan, which was three years in the making, and included some ideas touted by President Obama.

Among other changes, the plan would reduce income tax rates and establish just two brackets. It would also hit investment managers, big banks and top earners with additional taxes and fees to offset those revenue losses.

"This is a comprehensive plan that reflects input and ideas championed by Congress, the administration and, most importantly, the American people," Camp said. "In other words, it recognizes that everyone is a part of this effort and can benefit when we have a code that is simpler and fairer."

"Now they can get the lowest possible tax bill just by filing the basic 1040," Camp said. "No more itemizing. No more keeping track of all those receipts. And no more filling out all those extra schedules, forms, and worksheets."

Camp's plan, pitched in the middle of tax season, now faces a bleak political reality on Capitol Hill, however. The tax code has not been overhauled since 1986, and Senate Republican Leader Mitch McConnell was not optimistic about the chances this year -- he said Tuesday he sees "no hope" of tax reform in 2014.

When asked whether the Republican Party stood behind the plan, Boehner said, "You're getting a little bit ahead of yourself."

Camp received mixed feedback from the Democratic side of the aisle. A White House spokesman said they were still awaiting more details but voiced some optimism.

Rep. Chris Van Hollen, D-Md., top Democrat on the House Budget Committee, welcomed a "serious conversation" on the issue. "While I commend the Chairman for offering a comprehensive proposal, we need to thoroughly understand the choices this proposal makes, the consequences those choices have for America's families, and their impact on our nation's long-term fiscal health," he said in a statement.

Sen. Chuck Schumer, D-N.Y., was not so welcoming.

"Any proposal that eliminates the deduction for state and local taxes, as the Republican plan would do, is dead on arrival," he said in a brief statement.

Should Republicans choose to embrace the plan, they could use it to highlight their efforts to simplify tax laws and spur economic growth. Democrats surely would rely on it to point out cherished tax breaks that would be cut.

The plan is designed to raise about the same amount of tax revenue as the current system, though the overhauled system would be much simpler. It also is designed so that different income groups continue to pay about the same as they do today. Individual taxpayers could see big changes, depending on their circumstances.

Taxes on investments would be cut.

But, Camp said, a generous tax break enjoyed by investment managers, known as "carried interest," would be eliminated. Huge banks with more than $500 billion in assets would be hit with a fee. Corporate jet owners would have to wait longer to write off the cost of buying them.

Camp said the plan would eliminate a provision that allows wealthy entrepreneurs, consultants, lawyers, doctors and other professionals to avoid Medicare payroll taxes by setting up corporations and accepting the bulk of their compensation as business income instead of wages. All wages are subject to the 2.9 percent Medicare tax. An additional 0.9 percent tax is applied to wages above $125,000 for a single person and $250,000 for a married couple filing jointly.

The plan would shore up the cash-strapped highway trust fund by dedicating $126.5 billion in corporate tax revenue to the fund over the next eight years. The fund, which pays for infrastructure improvements, faces annual shortfalls.