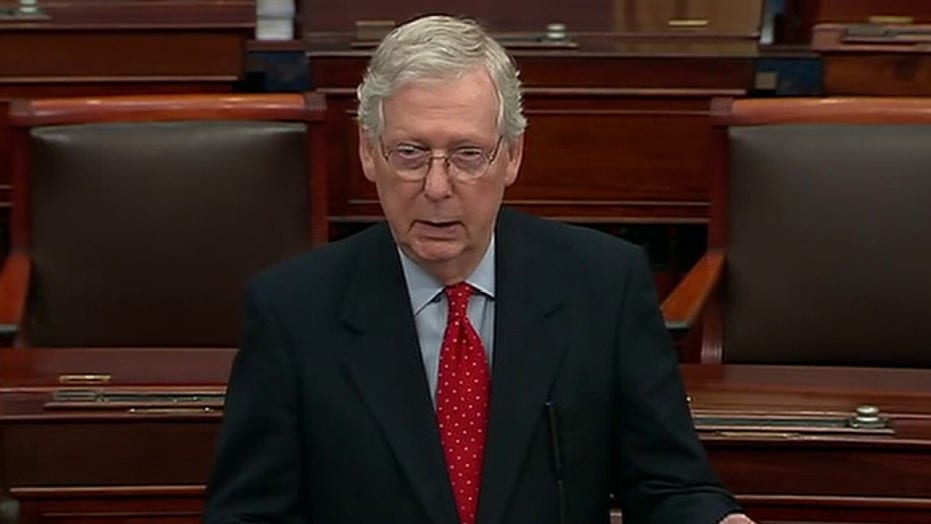 Democrats object to a measure pushed by the White House and Senate Majority Leader Mitch McConnell; reaction and analysis on 'Outnumbered.'

With the coronavirus crisis hitting state budgets hard, Senate Majority Leader Mitch McConnell, R-Ky., said Wednesday that he is open to allowing states to declare bankruptcy -- rather than sending governors more federal money to deal with their own ballooning deficits.

McConnell made the comments on "The Hugh Hewitt Show" against the backdrop of governors imploring the federal government for urgent fiscal help and congressional Democrats seeking to work with the Trump administration to provide it. McConnell, instead, said he "would certainly be in favor of allowing states to use the bankruptcy route," an option that is not currently available to them -- as he called for a "pause" in such aid from Washington.

"I mean, we all represent states. We all have governors regardless of party who would love to have free money," McConnell said in response to a question on what the federal government should do to help states in tricky financial situations. "And that’s why I said yesterday we’re going to push the pause button here, because I think this whole business of additional assistance for state and local governments need[s] to be thoroughly evaluated."

McConnell then mentioned that many states are struggling with funding pensions or similar programs, saying "[t]here's not going to be any desire on the Republican side to bail out state pensions by borrowing money from future generations."

After Hewett weighed in, criticizing liberal states that racked up significant liabilities, McConnell said he favored letting states declare bankruptcy, as local governments are allowed to.

"Yeah, I would certainly be in favor of allowing states to use the bankruptcy route. It saves some cities," McConnell said. "And there’s no good reason for it not to be available."

McConnell's comments come one day after the Senate advanced an interim stimulus package to restock funds in the Paycheck Protection Program (PPP) and address a handful of other priorities. He initially sought to have the bill include only funding for the PPP but Democrats held up the legislation until they could extract concessions from the majority leader. Though McConnell ceded to some of their requests, he kept funding for state governments out of the bill, which is expected to see a vote in the House of Representatives on Thursday.

GOVERNORS CALL FOR $500B TO OFFSET 'CATASTROPHIC DAMAGE' TO STATE ECONOMIES'

"Democrats are disappointed that the Administration has not agreed to more funding for state, tribal, and local governments on the front lines of this crisis who desperately need an infusion of funds to pay the essential workers who keep us safe," House Speaker Nancy Pelosi, D-Calif., and Senate Minority Leader Chuck Schumer, D-N.Y., said in a joint statement Tuesday.

"However, we are pleased that the President has committed to addressing this critical priority in CARES 2 and will work with urgency to see that this commitment is fulfilled," they continued, indicating that the president was on their side of the issue rather than McConnell's.

New York Gov. Andrew Cuomo, a Democrat, said in his daily coronavirus briefing Monday that Trump told him "he's going to work very hard" to secure funding for states in what Pelosi referred to as CARES 2, another massive stimulus bill that many in Congress, along with Trump, hope to pass once legislators return to Washington, D.C., on May 4.

"We have to have state funding," Cuomo said Wednesday. "The states have a role basically in a deficit situation. And we need funding from Washington."

It's unclear whether fiscal concerns, though, could lead some in Congress to reconsider the scope of any additional aid packages.

Governors have been calling for federal help for over a week. Maryland Republican Gov. Larry Hogan, the chairman of the National Governors Association, issued a statement on April 11 pleading with Congress to appropriate $500 billion for state governments as they deal with the economic and fiscal consequences of the coronavirus pandemic.

"In the absence of unrestricted fiscal support of at least $500 billion from the federal government, states will have to confront the prospect of significant reductions to critically important services all across this country, hampering public health, the economic recovery, and -- in turn -- our collective effort to get people back to work," Hogan said in a statement that also touted the work of governors to fight the coronavirus pandemic.

McConnell's comments Wednesday were not the first time allowing states to declare bankruptcy has been discussed. In the wake of the 2008 financial crisis, some advocated allowing hurting states to reorganize in bankruptcy. But Republicans at the time squashed the idea, even as they also panned the possibility of the federal government bailing states out.

"While bankruptcy for states may seem like an attractive alternative to state bailouts, there are significant constitutional concerns that should be addressed by congressional hearings," former Rep. Lamar Smith, R-Texas, said at the time.

McConnell, in his comments with Hewitt, noted that states are likely to agree that bankruptcy shouldn't be the first option.

"My guess is their first choice would be for the federal government to borrow money from future generations to send it down to them now so they don’t have to do that," he said. "That’s not something I’m going to be in favor of."

Fox News' Marisa Schultz and Gregg Re contributed to this report.