The Chaplin's prayer comes following a historic and hectic week within the House of Representatives.

After several chaotic and historic days on Capitol Hill, the chaplain of the House of Representatives opened the legislative day Thursday with a prayer to cast out “all spirits of darkness from this chamber.”

“This has been a difficult and contentious week in which darker spirits seem to have been at play in the people’s House," the Reverend Pat Conroy began.

Then, in a dramatic moment, Conroy raised both hands and said, "In Your most holy name, I cast out all spirits of darkness from this chamber. Spirits not from You. I cast out the spirit of discouragement which deadens the hope of those who are of goodwill.

FLOOR FIGHT ROCKS THE HOUSE, AS PELOSI'S SPEAKING PRIVILEGES ARE REVOKED AND CHAIR DROPS THE GAVEL AND BAILS

"I cast out the spirit of petty divisiveness which clouds the sense and the desire to be of fruitful productivity and addressing the issues more appropriately before this House," he continued. "I cast out any sadness brought on by the frustration of dealing with matters detrimental to the honorable work each member has been called to engage in.”

Conroy concluded with a plea to the Lord: "Annoit your servants here in the House with a healing balm to comfort and renew the souls of all in this assembly. May your spirit of wisdom and patience descend upon all so that any spirit of darkness might have no place in our midst. Rather, let Your spirit of comity, of brother-and-sisterhood, and love of our nation, and all colleagues in this chamber, empower our better angels to be at play in the common work to be done, for the benefit of all Your people. May all that is done within the people's House be for Your greater honor and glory. Amen."

The chaplain is responsible for opening the House each day with a prayer and offering counsel to lawmakers and aides on the House side of the Capitol. Conroy is a Roman Catholic priest from the Jesuit order. The Jesuit motto is Ad maiorem Dei gloriam, or "For the greater glory of God."

Escalating tensions on Capitol Hill erupted into a floor fight in the House on Tuesday afternoon, as Speaker Nancy Pelosi, D-Calif., spoke in favor of a resolution condemning "racist" comments by President Trump. Pelosi's words were eventually ruled out of order, as House Majority Leader Steny Hoyer, D-Md., announced the decision from the House parliamentarian.

The dramatic episode began when Rep. Doug Collins, Ga., rose to challenge Pelosi and demanded that her words be "taken down." The extraordinary rebuke was the first of its kind involving a member of Congress and a speaker of the House in decades, and led to Pelosi briefly losing her speaking privileges.

The scene then became even more bizarre when the presiding officer, Rep. Emanuel Cleaver, D-Mo., told representatives after a lengthy huddle that he was trying to make a fair ruling as to whether Pelosi had broken House rules governing decorum, but people weren’t cooperating. Cleaver told Fox News he felt Pelosi was being singled out.

Cleaver simply declared, "I abandon the chair," and left -- a moment with no apparent precedent in modern congressional history.

Conroy won his job back early last year, just hours after sending a scalding letter to then-House Speaker Paul Ryan, R-Wis., that accused a top Ryan staff aide of telling him “something like ‘maybe it’s time that we had a Chaplain that wasn’t a Catholic.’”

Ryan, who had previously claimed to be dissatisfied with Conroy's pastoral care to lawmakers, forced the chaplain to tender his resignation, sparking a firestorm. However, Ryan — himself a Catholic — later reversed course.

“It is my job as speaker to do what is best for this body, and I know that this body is not well served by a protracted fight over such an important position,” Ryan said. 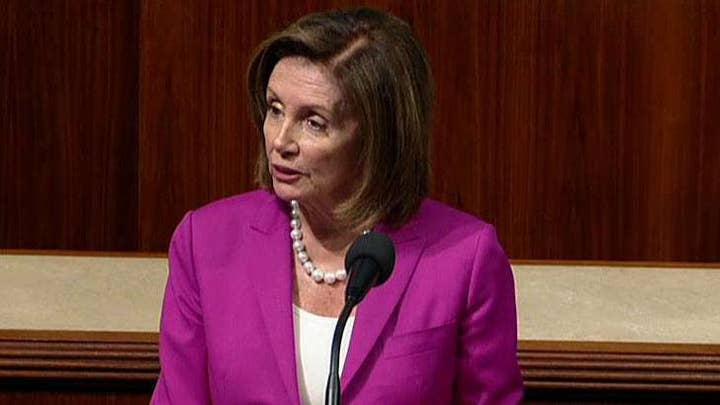 Ryan’s statement came soon after Conroy delivered a two-page letter that said he has never “heard a complaint about my ministry." Instead, Conroy said top Ryan aide Jonathan Burks told him the speaker wanted his resignation and cited a prayer last year that some read as critical of the GOP tax bill.

The chaplain is elected by the full House and Democrats said Ryan did not have the power to fire him.

Conroy at the time called his seven years of House service "one of the great privileges of my life.”