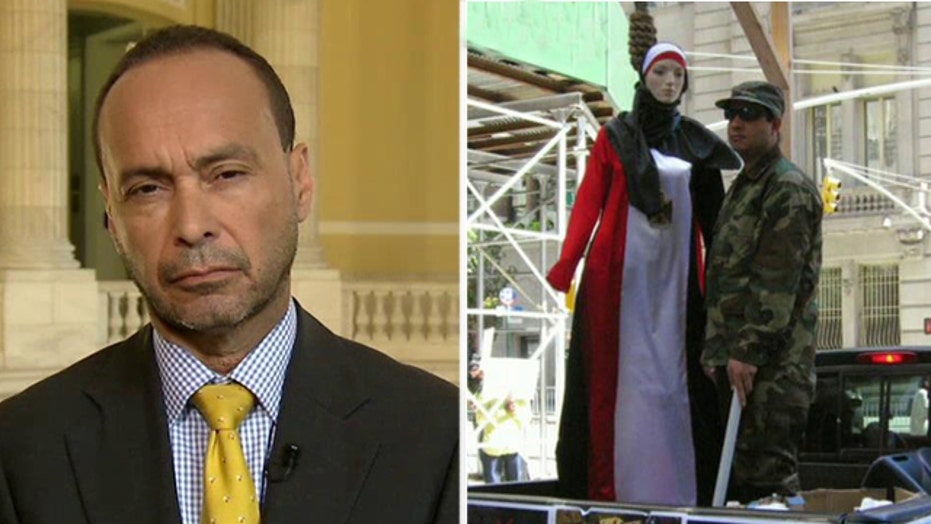 In back-to-back votes, the Republican-led House on Wednesday gave the U.S. military the authority to train and arm Syrian rebels against the Islamic State and then approved a bill to fund the federal government through Dec. 11.

The votes capped a dramatic debate on Capitol Hill in which lawmakers expressed uncertainty about the Syria vote. The train-and-equip mission is a major plank of the president's plan to defeat the Islamic State. But, as the administration prepares for airstrikes in Syria and expands them in Iraq, lawmakers have raised concerns over whether American troops would be dragged into combat missions and over whether the Syrian rebels the U.S. would train can be trusted.

Despite such concerns among many rank-and-file House members, top chamber leaders such as Minority Leader Nancy Pelosi, D-Calif.; Speaker John Boehner, R-Ohio; and Majority Leader Kevin McCarthy, R-Calif., threw their support behind the plan to help get it passed.

“This measure represents an important, initial step forward in taking on the Islamic State of Iraq and the Levant,” Boehner said. “ISIL represents a direct threat to the safety and security of the United States, and House Republicans are firmly committed to doing everything we can to help keep America safe.”

The vote tally was 273-156, with 159 Republicans and 114 Democrats voting yes. Lawmakers first voted in favor of President Obama’s Syria request, then tacked the amendment to the spending bill and voted a second time.

A day earlier, Gen. Martin E. Dempsey, chairman of the Joint Chiefs of Staff, drew widespread attention when he told Congress he might recommend the use of U.S. ground combat forces if Obama's current strategy fails to stop the militants.

But the Obama administration later made clear the mission would be only to support and train, although also saying U.S. military personnel could be “forward deployed.”

The legislation now heads to the Democrat-controlled Senate for all but certain final passage.

The upper chamber is likely to vote only once -- combining approval for arming and training rebels with the no-shutdown federal spending provisions.

Some House GOP lawmakers had also expressed concern about the short-term nature of the military authorization amendment. Its authority also ends Dec. 11. But Congress still would have plenty of time to return to the issue in a post-election session set to begin in mid-November.

The cost of training and equipping the rebels is an estimated $500 million. But the money will be allocated from existing budgets and is not a request for additional funds.

Testifying before a Senate Committee, Secretary of State John Kerry said Monday the forces seeking to create an Islamic state "must be defeated. Period. End of story."

There was little, if any, dissent on that, but plenty of debate about the best way to accomplish it.

"We simply don't know if somewhere down the line it will turn our guns back against us," said Rep. Loretta Sanchez, D-Calif., giving voice to a fear that rebels seeking the removal of Syrian president Bashar Assad would eventually prove unreliable allies.

The day's developments unfolded as Dempsey's day-old remarks reverberated around the globe.

U.S. troops "will support Iraqi forces on the ground as they fight for their own country against these terrorists," Obama told officers at U.S. Central Command, which oversees American military efforts in the Middle East. He added that "As your commander in chief, I will not commit you and the rest of our armed forces to fighting another ground war in Iraq."

Vice President Joe Biden, asked on a visit to Iowa about Dempsey's comment on the use of ground troops, said the general's "conclusion is that it is not needed now." Biden added: "We'll determine that based on how the effort goes."

Pelosi told reporters the House voted was “not to be confused with any authorization to go further. ... I will not vote for combat troops to engage in war."

In Baghdad, Iraq's new prime minister told The Associated Press in an interview that his government wants no part of a U.S. ground combat mission. "Not only is it not necessary; we don't want them. We won't allow them," Prime Minister Haider al-Abadi said.

Controversy over a new military mission overshadowed what otherwise might have been a noteworthy accomplishment for a Congress marked by near-constant gridlock. Passage of the legislation would eliminate any possibility of a partial government shutdown like the one Republicans triggered a year ago by trying to zero out Obama's health care program.

The vote on the spending bill, or so-called “continuing resolution, was 319 to 108, with 53 Republicans and 55 Democrats voting no.

The measure also renews the charter of the Export-Import Bank, which helps finance purchases of U.S. exports. That postpones until next June a battle between Tea Party forces opposing the bank and business-oriented Republicans who support it.

The legislation also includes $88 million to combat the outbreak of Ebola in West Africa.