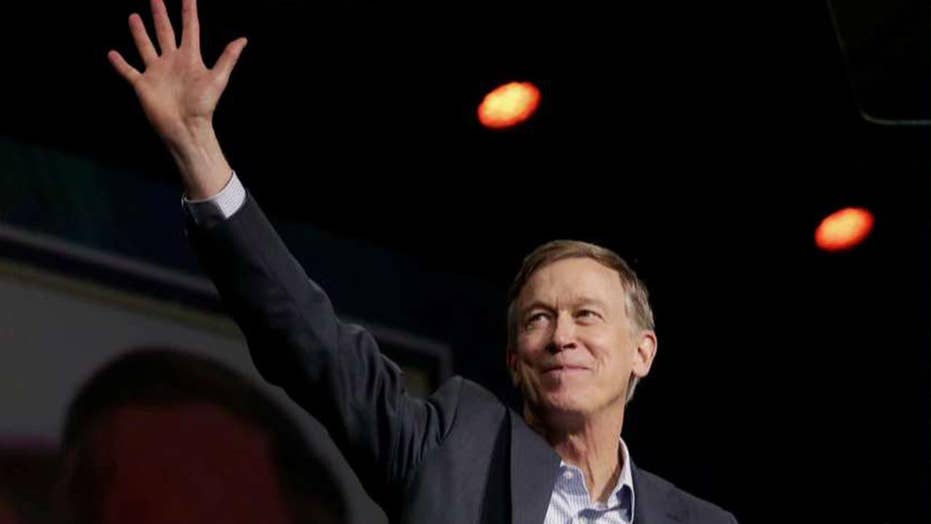 Democratic U.S. Senate candidate John Hickenlooper has been held in contempt by the Colorado Independent Ethics Commission after he didn't appear Thursday at a mandatory hearing, defying orders to do so as the panel considers a Republican complaint that private plane trips he took while governor of Colorado violated the state's gift ban.

Another hearing will be held Friday morning in Hickenlooper's absence to discuss possible sanctions. The committee vote to hold Hickenlooper was a unanimous 5-0, according to KDVR reporter Michael Konopasek.

The development could shift Hickenlooper's fortunes: it comes as polls show Hickenlooper as a favorite to defeat incumbent Republican Sen. Cory Gardner.

THE LATEST FROM FOX NEWS ON THE 2020 SENATE CAMPAIGNS

"John Hickenlooper's unending efforts to avoid testifying about his use of corporate-paid private jets and a Maserati limo have been rewarded with his being found in contempt," National Republican Senatorial Committee (NRSC) spokesperson Joanna Rodriguez said in a statement. "Hickenlooper's blatant disregard for our legal system and his state's ethics laws make it impossible for Colorado voters to trust him with elected office again.”

Mark Grueskin, an attorney for Hickenlooper, had logged onto the remote hearing 15 minutes after it started, citing problems with his Internet connection. He told commissioners that Hickenlooper's legal team had appealed a Wednesday night court order for him to appear.

Elizabeth Espinosa Krupa, the chair of the ethics commission, called Hickenlooper's actions “a little bit contemptible,” just prior to the contempt vote.

Hickenlooper was also subpoenaed by the commission to appear but argued the hearing's remote format violates his right to face his accusers in person.

The Public Trust Institute, a conservative group that filed the complaint, also said it preferred an in-person hearing.

The commission had asked Hickenlooper to suggest some dates, and he proposed in-person hearings be held in August — long after his June 30 Democratic primary against former Colorado House Speaker Andrew Romanoff. The winner will challenge Gardner in the November election.

Late in the day, Grueskin offered to have Hickenlooper appear at a June 16 hearing but the commission rejected the last-minute offer. The commission decided instead to pursue the remote hearing.

“Your client has willfully chosen not to appear here,” Krupa told Grueskin. “I’m not willing to wait until the 16th.”

Despite Hickenlooper's appeal, the commission voted unanimously Thursday to ask the state attorney general to enforce the subpoena — a move that was opposed by Hickenlooper's team, according to his campaign spokeswoman, Melissa Miller.

The ethics commission, a quasi-judicial civic body, will consider the ethics complaint after it decides on contempt sanctions. Hickenlooper could be fined if the commission rules against him.

The Public Trust Institute, led by Frank McNulty, a former Republican speaker of the Colorado House, has alleged that Hickenlooper violated Colorado's ethics law by taking free flights on private jets as governor. Hickenlooper, who was governor from 2011 to 2019, has denied the accusations as politically motivated.

The complaint deals with travel to Turin, Italy, for a meeting of government, business and financial leaders, and a separate trip to Connecticut on a jet owned by billionaire Larry Mizel’s company, MDC Holdings, to preside at the commissioning of the USS Colorado, a U.S. Navy submarine. MDC Holdings is a large developer in Colorado.

Colorado law at the time prohibited gifts worth more than $59 to elected officials with limited exceptions. That figure is now $65.

“Coloradans expect that their public officials are not magnets for VIP signs,” attorney Suzanne Staiert, representing the institute, said in her opening statement.

But Grueskin countered that "some of the allegations made about appearance of impropriety and about the nature of some of the plane gifts would not meet (a) preponderance of the evidence standard” needed to find that the ex-governor violated ethics laws.

Late Wednesday, a Denver district court judge dismissed a bid by Hickenlooper to quash the subpoena that he appear at the hearing, which was being conducted remotely because of the coronavirus pandemic.

In addition to Grueskin's late appearance, the start of Thursday’s hearing was delayed as commission members tried to mute dozens of people talking after they had logged on to or phoned in to the public session. Someone was heard giving repeated driving directions to someone else apparently in Denver.

Hours later, audio and visual issues and problems with internet connections kept interrupting the proceedings, including the display of exhibits onscreen and questioning of witnesses.

Hickenlooper launched a campaign for the Senate last August, one week after ending his bid for the White House.

“I’ve always said Washington was a lousy place for a guy like me who wants to get things done – but this is no time to walk away from the table,” Hickenlooper said at the time, in a video posted on his campaign website. “I’m not done fighting for the people of Colorado.”