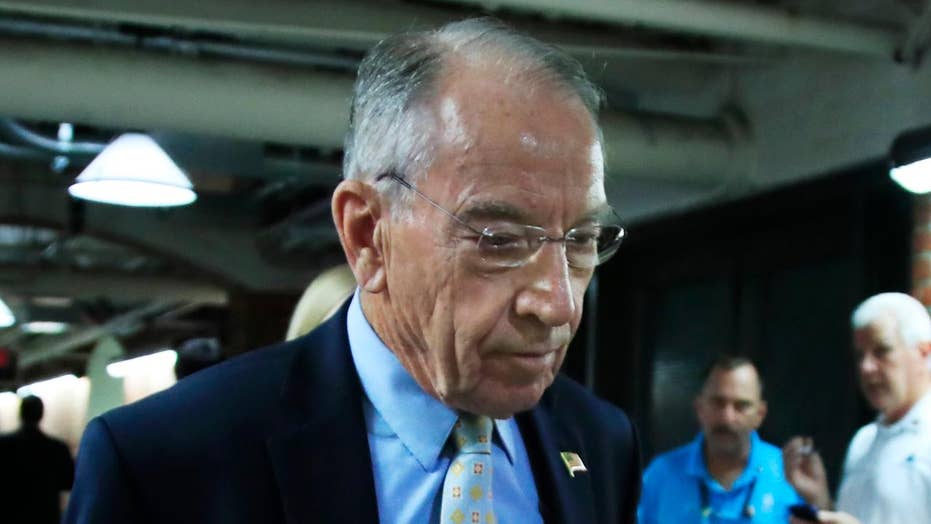 Sanders, I-Vt., had penned a letter to Grassley, R-Iowa, on Saturday, asking that the FBI investigate Kavanaugh for possible perjury before the committee.

“In order for the FBI investigation regarding Judge Brett Kavanaugh’s nomination to be complete, it is imperative the bureau must not only look at the accusations made by Dr. Ford, Deborah Ramirez and Julie Swetnick, it should also examine the veracity of his testimony before the Judiciary Committee,” Sanders wrote, adding that a “thorough investigation should include a review of Judge Kavanaugh’s numerous untruthful statements in his previous testimony before Congress.”

Sanders, 77, went on to list a series of questions for Kavanaugh on topics dating back to 2004, before his confirmation as a federal judge, as well as on the latest sexual assault allegations against him, which Kavanaugh denies.

In response, the 85-year-old Grassley delivered a stingingly sarcastic rebuttal, thanking Sanders for raising concerns in the “eleventh hour” and suggesting his inquiry must mean he is seriously considering Kavanaugh for the high court.

“As you know, on July 10, 2018, you stated ‘[w]e must mobilize the American people to defeat Judge Kavanaugh.’ This happened less than 24 hours after Judge Kavanaugh’s nomination was announced,” Grassley wrote. “As you also know, all Senators have had access to 307 judicial opinions Judge Kavanaugh wrote during his twelve years on the bench, over 500,000 pages of documents, over 40 hours of live testimony, and answers to more written questions than every prior Supreme Court nominee combined.”

Grassley went on to remind Sanders that despite the access to the materials, he “made a decision on this nomination in less than 24 hours.”

“Your public statements clearly reveal how unimportant it is to you to review any facts related to this nomination,” Grassley wrote. “So you can imagine my surprise at receiving your letter regarding the supplemental FBI background investigation.”

He sarcastically asked: “Am I to take from your letter that you are now undecided and willing to seriously engage with the Senate’s advice-and-consent constitutional duties related to the nomination of Judge Kavanaugh to serve as an Associate Justice on the Supreme Court of the United States? ... If so, we should have a conversation about what information you need to assist you in making your decision, and I look forward to that conversation.”

Sanders has not yet responded to Grassley’s letter.

The current FBI probe was ordered on Friday, after undecided Sen. Jeff Flake asked for another background investigation to vet sexual assault claims.

Christine Blasey Ford, who testified before the committee last week, alleges that at a high school party 36 years ago, Kavanaugh pinned her down and tried to remove her clothing, while his friend, Mark Judge, watched.

Ramirez is accusing Kavanaugh of exposing himself to her at a dorm party during their freshman year at Yale University; and Swetnick has accused Kavanaugh of being involved in or present at “gang” rapes in the early 1980s.