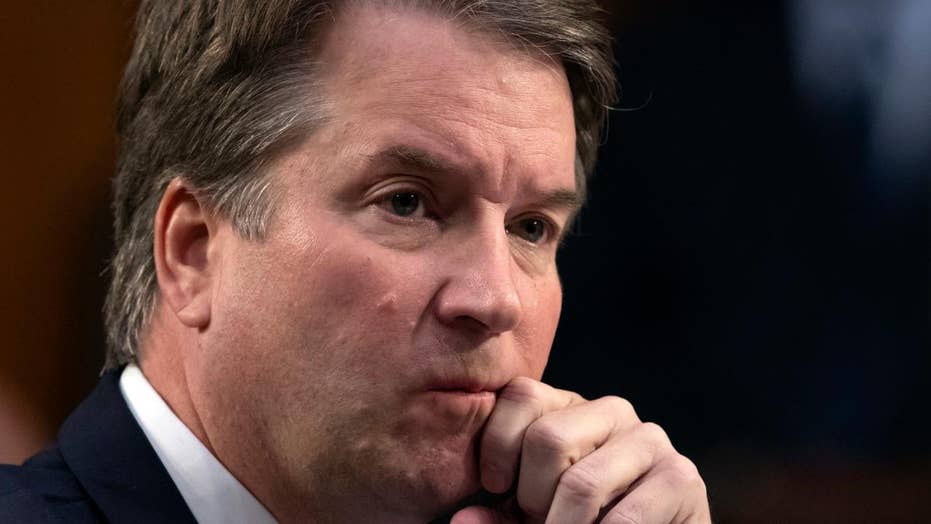 Sen. Feinstein is facing scrutiny over the handling of the Kavanaugh accusation. Fox News contributor looks at both sides of the argument.

Senate Judiciary Committee Chairman Chuck Grassley and other top Republicans on Wednesday urged Christine Blasey Ford in a letter to reconsider her apparent refusal to testify next week about her decades-old sexual assault allegations against Supreme Court nominee Brett Kavanaugh.

In a separate, scathing letter to Senate Judiciary Committee Democrats, Grassley sharply condemned what he called their persistent "abuse of this confirmation process" through "delay and obstruction ... with every argument available." Grassley reiterated that Monday's hearing would remain on the calendar despite Democrats' objections.

"I will view any additional complaints about this process very skeptically," Grassley wrote.

Meanwhile, sources tell Fox News that the White House confirmation team conducted a so-called “murder board” with Kavanaugh Tuesday in preparation for Monday’s scheduled hearing. Sources say he did well in the session, and that "he was solid - there was no wavering."

On Tuesday night, Ford's lawyers wrote to Grassley that "an FBI investigation of the incident should be the first step in addressing her allegations," rather than a Senate hearing before politicians "who appear to have made up their minds."

grassltr by Fox News on Scribd

The attorneys, Lisa Banks and Debra Katz, asserted that her family "was forced to relocate out of their home" and that "her email has been hacked, and she has been impersonated online."

They also criticized Grassley for proposing to put Ford at "the same table as Judge Kavanaugh in front of two dozen U.S. Senators on national television to relive this traumatic and harrowing incident."

In response, Grassley flatly denied that he had ever suggested Ford sit near Kavanaugh, and insisted he has made every effort to accomodate the accuser in a variety of ways.

"In recognition of how difficult it can be to discuss allegations of this kind in public, I have also offered [Ford] the choice of testifying in either a public or closed session of the hearing," Grassley wrote Wednesday to Ford's attorneys.

In his letter to Senate Democrats, Grassley noted that his staff was willing to "fly to California, or anywhere else, to meet" Ford and interview her privately or publicly. He also criticized Democrats for refusing to respond to offers by committee Republican staffers to set up meetings with Kavanaugh, Ford, and others.

"You have stated repeatedly that Dr. Ford wants to tell her story," Grassley wrote to Ford's lawyers. "I sincerely hope that Dr. Ford will accept my invitation to do so, either privately or publicly, on Monday. In the meantime, my staff would still welcome the opportunity to speak with Dr. Ford at a time and place convenient to her."

Grassley was joined in that sentiment by Maine Republican Sen. Susan Collins, a moderate considered a key potential swing vote on Kavanaugh's confirmation.

"I hope that Dr. Ford will reconsider and testify before the Senate Judiciary Committee on Monday," Collins tweeted. "It is my understanding that the Committee has offered to hold either a public or a private session, whichever would make her more comfortable."

WATCH: FEINSTEIN ADMITS SHE CAN'T BE SURE ACCUSER BEING COMPLETELY 'TRUTHFUL'

Fox News has learned from a source close to Collins that the Maine senator called the FBI's Deputy Director on Wednesday to learn more about the FBI's potential role in the proceedings as part of her "due diligence."

Grassley maintained in his letter that it was not the FBI's job to review the allegations against Kavanaugh.

"It is not the FBI’s role to investigate a matter such as this," he wrote. "The Constitution assigns the Senate, and only the Senate, with the task of advising the President on his nominee and consenting to the nomination if the circumstances merit. We have no power to commandeer an Executive Branch agency into conducting our due diligence."

The top Judiciary Committee Republican repeated that assertion in his letter to Senate Democrats, saying their request for a comprehensive FBI probe "demonstrates a fundamental misunderstanding" of the agency's role.

The FBI conducted a background check of Kavanaugh as part of the Supreme Court nomination process. When Senate Judiciary Committee ranking Democrat Dianne Feinstein alerted federal authorities to the allegations against Kavanaugh last week, they forwarded the information to the White House.

Fox News has learned that the FBI would need explicit instructions to investigate the matter further, because it falls outside any applicable statute of limitations and seemingly does not involve a federal crime.

On Tuesday, a federal law enforcement official told Fox News, "It's totally inappropriate for someone to demand we use law enforcement resources to investigate a 35-year-old allegation when she won't go under oath and can't remember key details including when or where it happened."

Grassley dismissed comparisons made by Ford's lawyers to the FBI investigation of Anita Hill's sexual harassment allegations against then-nominee Clarence Thomas in 1991, saying that Hill's allegations were non-public when the FBI conducted a few days of background interviews to assess their validity before forwarding them on to the White House.

"We are in the same position the Committee was in after Professor Hill's allegations were leaked," Grassley said. "After that leak, we did not ask the FBI to conduct an investigation. Instead, we reopened the hearing and assessed the testimony that was given on our own."

Speaking to reporters on Wednesday, President Trump called Kavanaugh's treatment "very unfair," and added that the FBI has "investigated about six times before, and it seems that they don't do that," meaning conduct the kind of extensive follow-up requested by Ford.

Kavanaugh's nomination troubles began last week after a leak to The Intercept revealed that Feinstein, since July, had been in possession of a supposedly damning letter relevant to his confirmation. Republicans have charged that Senate Democrats orchestrated that leak, which then prompted Feinstein to discuss the letter and its then-anonymous accusations publicly and with the FBI.

Prior to last week, Feinstein had not shared the letter with other members of the Judiciary Committee or federal authorities, even privately. Top Republicans accused the California Democrat of sitting on the information to prompt a last-minute delay in Kavanaugh's confirmation and push a vote to after November's critical midterm elections.

Ford went public on Sunday, just days before a scheduled Judiciary Committee vote on Kavanaugh's confirmation, alleging that Kavanaugh forced himself onto her and covered her mouth in the 1980s, when Kavanaugh was 17 and she was 15. Ford did not mention the incident to others by her own admission until 2012, according to The Washington Post, when her therapist recorded her claim that four people were involved.

KAVANAUGH CLASSMATE REPORTEDLY AT PARTY: 'NO KNOWLEDGE' OF ANY IMPROPER CONDUCT

Meanwhile, Patrick J. Smyth, who attended prep school with Kavanaugh, wrote a letter to Grassley and Feinstein after he said Ford had identified him as an individual present at the party at which Kavanaugh committed the alleged sexual assault.

On the advice of Katz, a lawyer who has previously downplayed sexual assault allegations against former President Bill Clinton and former Sen. Al Franken, Ford took and passed a polygraph exam, the Post reported.

Katz has refused numerous requests by Fox News for comment on the polygraph. Sen. Lindsey Graham, R-S.C., has questioned who paid for the polygraph examination, and numerous former FBI officials and psychology experts have told Fox News that polygraphs would have trouble detecting not only certain kinds of deception, but also false memories that were inadvertently induced during therapy or the passage of time.

Ford told The Post she could not remember in whose house the alleged incident occurred, the exact month of the episode, or why there was a gathering there.

The very fact that Ford's identity was now public, Grassley suggested Wednesday, was largely the result of Democrats' cynical mishandling of the situation and leaks to the press.

"I fear that the leaks of confidential information will discourage whistleblowers and victims from cming forward in the future," he wrote.