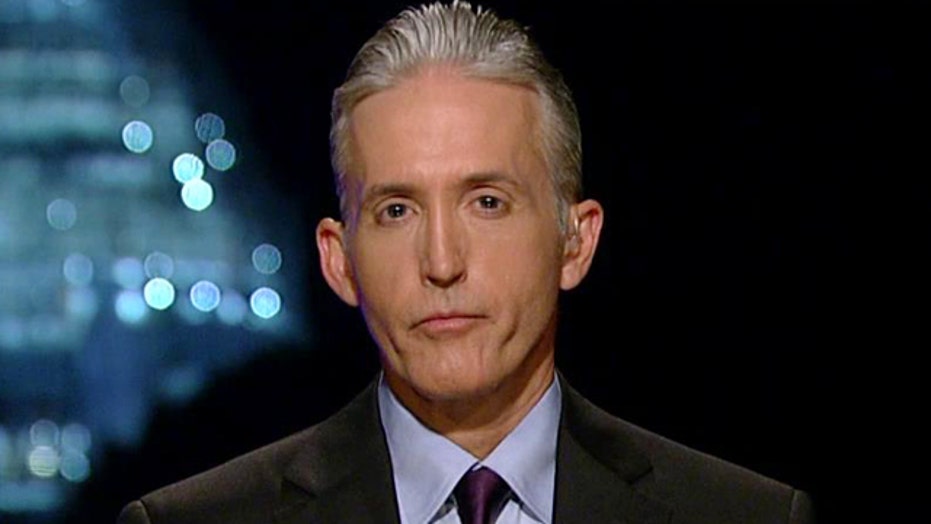 Longtime Clinton confidant Sidney Blumenthal was "merely a conduit" and did not write the numerous memos about Libya he forwarded to then-Secretary of State Hillary Clinton, the chairman of the House panel investigating the deadly 2012 Benghazi attacks said Tuesday.

Blumenthal was forwarding information from someone who may have had business interests in Libya, Rep. Trey Gowdy, R-S.C. told Fox News’ Megyn Kelly after Blumenthal spent nearly nine hours at the Capitol as Gowdy’s committee met in closed session. Gowdy later named former high-ranking CIA official Tyler Drumheller as the man behind the information.

Gowdy said that Blumenthal has never been to Libya, is not an expert on the country and therefore “has no idea” as to the validity of the information he was sending to Clinton, now a Democratic presidential candidate.

“Not only was [Blumenthal] providing unvetted, uncorroborated, unsubstantiated intelligence to our top diplomat, he was just simply forwarding on intelligence that somebody by the name of Tyler Drumheller was sending him,” Gowdy said.

Gowdy did not specify the author's business interest. But the original report in The New York Times on Blumenthal's memos said the information was coming from "business associates" Blumenthal was advising -- including Drumheller -- who reportedly were trying to win contracts from the transitional government, including to create floating hospitals and temporary housing. They were not successful.

“[Blumenthal] didn’t know if the sources were legitimate, he didn’t know whether or not the information had been corroborated. He was merely a conduit between somebody who may have had a financial interest in Libya and our nation’s top diplomat,” Gowdy said.

Blumenthal was not a member of the Obama administration at the time. When Megyn Kelly posed Clinton’s claim that she has many friends emailing her, Gowdy responded: “Her other friends are not emailing her about Libya. He is.”

Gowdy also took issue with Clinton’s claim that the information from Blumenthal was unsolicited.

“Secondarily, she used the word unsolicited,” Gowdy said. ”Megyn, when these emails are released, I want you to count the number of times she says “keep ‘em coming” “this is great, ‘useful information.’ I don’t know what her definition of unsolicited is, but it is very strikingly different from my own.”

Both Gowdy and Blumenthal agreed that Blumenthal shed little light on the Benghazi attack, but Gowdy called the all-day session interrupted by lunch and floor votes "productive" and informative. Blumenthal, however, said his appearance "was for one reason and one reason only, and that reason is politics," The Associated Press reported.

Blumenthal, meeting with reporters after his testimony ended, said the memos were written by a former high-ranking CIA official, adding that he passed them on to Clinton as a friend. Blumenthal declined to name the source of the information.

The evening after the September 2012 Benghazi attack, Blumenthal forwarded to Clinton an analysis of the situation from  Drumheller which purported to contain information from "sources with direct access to the Libyan National Transitional Council as well as the highest levels of European governments as well as Western intelligence and security services."

The memo said a top Libyan official, Mohamed Yousef el-Magariaf, had told close associates that the Benghazi attack was carried out by the militant group Ansar al-Sharia and that Libyan security officials believed the group "took advantage of cover provided by" demonstrations against an Internet video seen as insulting to the Prophet Mohammed to conduct it.

Blumenthal said he "explained the facts" about his correspondence with Clinton to the committee and "dispelled some myths recklessly disseminated" by some committee members.

"I answered every question," Blumenthal said, adding that he "shed no light on events in Benghazi" because he has no firsthand knowledge and never worked for the Obama administration.

Earlier Tuesday it was revealed that dozens of emails handed over to Congress from Blumenthal were not part of the trove of emails originally submitted by the State Department, raising questions over why those emails were apparently withheld.

One source told Fox News the newly submitted emails from Blumenthal show a "significant gap" in the record.

Blumenthal's role in sending the near-monthly missives emerged when nearly 350 pages of emails about the 2012 attacks on the U.S. diplomatic post in Benghazi were publicly released last month.

Those documents, though, were never made available by the State Department.

It was unclear whether the State Department withheld them, or whether they were never provided by Hillary Clinton to the department for review.

"Clearly, the committee should have gotten this information sooner," Gowdy told reporters before the session.

Fox News was told the documents show Blumenthal providing policy advice to Clinton on Libya, and acting as a de facto intelligence operative for her, especially in 2011 before Libyan dictator Muammar Qaddafi was forced from office and killed.

However, committee Democrats called the delay understandable after Gowdy and majority Republicans expanded the panel's scope from a probe of the September 2012 attacks that killed four Americans, including the U.S. ambassador, to a broader examination of U.S. policy toward Libya.

Democrats cited a May 29 letter from Gowdy to Blumenthal seeking "any and all documents and communications" sent to or received by Blumenthal related to Libya, "but not limited to Benghazi and Tripoli." The letter also asks for information on weapons found in, imported to or removed from Libya. Gowdy made similar, broad requests in a March subpoena issued to the State Department.

"Secretary (John) Kerry has been clear that the State Department will be both transparent and thorough in its obligations to the public on this matter," Gerlach said.

However, Gowdy told Megyn Kelly that Kerry has not yet handed over the documents that the committee has requested from the State Department. Gowdy says that he wants those emails before he can arrange a time for Clinton to appear in front of the committee.

“I don’t have a police force, I can’t send somebody over to the State Department to seize these documents,” Gowdy said. “[Kerry] is the one person standing between me and Secretary Clinton having our, as she put it, ‘single conversation.’"