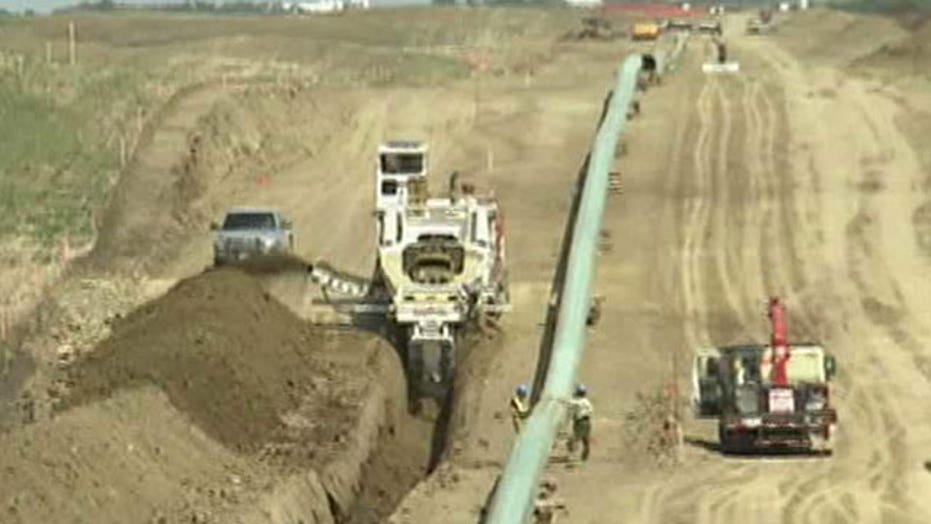 Fair and balanced debate over safety of transporting crude oil

Senate Republicans are calling on President Obama to make a decision on the long-delayed Keystone XL pipeline that would carry oil derived from tar sands in western Canada to refineries on the Gulf Coast.

Sens. John Hoeven, R-N.D., and John Barrasso, R-Wyo., sent a letter to the White House on Friday urging the president to approve Keystone XL, arguing the administration has had "more than enough time" to study the project.

"Given the length of time your administration has studied the Keystone XL pipeline and the public's overwhelming support for it, you should not further delay a decision to issue a Presidential permit," the senators wrote.

The letter, which was signed by all 45 Republican senators, noted that Obama told Senate Republicans during a March 2013 meeting that a final decision on Keystone would be made before the end of the year.

"We are well into 2014 and you still have not made a decision," the lawmakers said.

The renewed lobbying on the pipeline comes as Calgary-based TransCanada, which has been seeking approval for Keystone since 2008, began shipping oil from its southern leg. Oil started flowing Wednesday through a 485-mile segment from Oklahoma to the Houston region.

The State Department, which has jurisdiction over the pipeline because it crosses an international border, is expected to release a report on the environmental impact of the proposed project in early or mid-February, The Wall Street Journal reported Friday.

Officials familiar with the State Department review said the report, known as an environmental impact statement, is expected to be relatively vague, giving Obama wide leeway to make a decision for or against the proposal, the newspaper reported.

On Thursday, U.S. and Canadian accident investigators urged their governments to impose new safety rules on so-called oil trains, warning that a "major loss of life" could result from an accident involving the increasing use of trains to transport large amounts of crude oil.

A spokesman for TransCanada said Friday it is in everyone's interest to ensure that oil shipments are as safe as possible — whatever the method.

TransCanada has agreed to implement 57 voluntary safety measures for Keystone XL in a bid to convince U.S. officials that the pipeline is a good risk.

"As we have said before, pipelines and rail continue to be complementary parts of the transportation equation, and the facts show that it is much safer to move large volumes of products, like oil, longer distances by pipeline," said Shawn Howard, a company spokesman.

TransCanada chief executive Russ Girling said last week that if the Obama administration doesn't approve the pipeline, his company will look to build rail terminals in Alberta and Oklahoma. Girling called pipelines "by far a safer alternative" to oil trains, but said if customers want him to build rail terminals, he will.