Republicans in the Senate secured enough votes Friday evening to reject Democratic efforts to extend the impeachment trial of President Trump and call new witnesses, paving the way for his widely expected acquittal next week on charges of abuse of power and obstruction of Congress over his dealings with Ukraine.

Majority Leader Mitch McConnell, R-Ky., said late Friday he expects to "conclude the trial in the coming days" as the Senate approved the framework to continue the trial on Monday, with a final up-or-down vote on Wednesday.

After hours of debate during the day on Friday, the Senate voted 51-49 to block a Democratic motion to call new witnesses. The vote came after vehement demands from Democrats to call former national security adviser John Bolton to testify about the Trump-Ukraine saga. Two Republicans -- Utah Sen. Mitt Romney and Maine Sen. Susan Collins -- voted with Democrats.

"A majority of the U.S. Senate has determined that the numerous witnesses and 28,000-plus pages of documents already in evidence are sufficient to judge the House Managers’ accusations and end this impeachment trial," McConnell said after the vote.

Democrats decried the failure of the motion.

"America will remember this day, unfortunately, where the Senate did not live up to its responsibilities, where the Senate turned away from truth and went along with a sham trial," said Democratic Leader Chuck Schumer, D-N.Y. 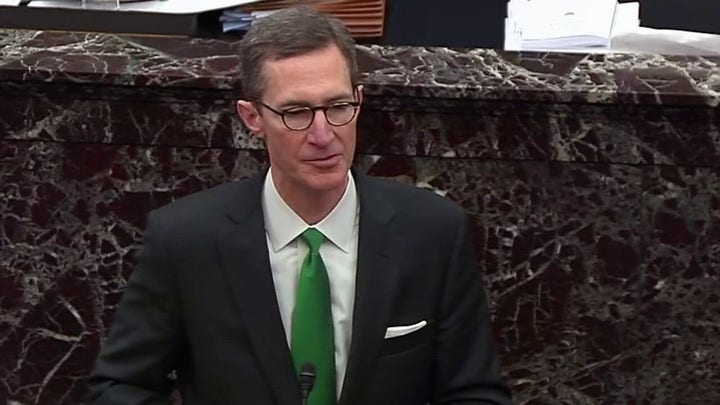 Later on Friday evening, Senate Republicans voted down four amendments offered by Democrats to call Bolton and White House acting chief of staff Mick Mulvaney, among others. Chief Justice Roberts told Schumer before that vote series that he would not break ties in the Senate, after Democrats in recent days raised the possibility Roberts could possibly tip the scales for them during votes on amendments.

"I think it would be inappropriate for me, an unelected official from a different branch of government, to assert the power to change that result so that the motion would succeed," Roberts told Schumer.

The vote on witnesses came as Trump was flying to Florida. A senior administration official aboard Air Force One said that the reaction to the Senate vote was “calm, but pleased."

"Nothing like applause or cheering, but just a recognition that things are clearly going in the right direction,” the official said.

There will be no trial action over the weekend. The trial will resume Monday with closing arguments by the impeachment managers and defense counsel. Senators will have the opportunity to make speeches on Monday and Tuesday.

The final vote will come the same week as Iowa’s caucuses on Monday and the State of the Union address on Tuesday. A senior congressional source told Fox News that there has been no discussion about postponing the speech, as advance teams have been crawling all over the Capitol in preparation for Tuesday’s address.

Earlier Friday, it became apparent that Republicans had the votes to shut down any new witnesses from testifying in the trial, with Sens. Lamar Alexander, R-Tenn., and Lisa Murkowski, R-Alaska, announcing they wouldn’t defect.

After the vote on witnesses, Trump drew attention to the number of witnesses during the House's impeachment proceedings: "Democrats = 17 Witnesses. Republicans = 0 Witnesses."

On Friday, Sen. Richard Blumenthal, D-Conn., rejected criticism that Democrats are trying to extend the trial until after the Iowa caucuses, which would keep four 2020 White House hopefuls away from the campaign trail and past Trump’s planned State of the Union address on Tuesday. 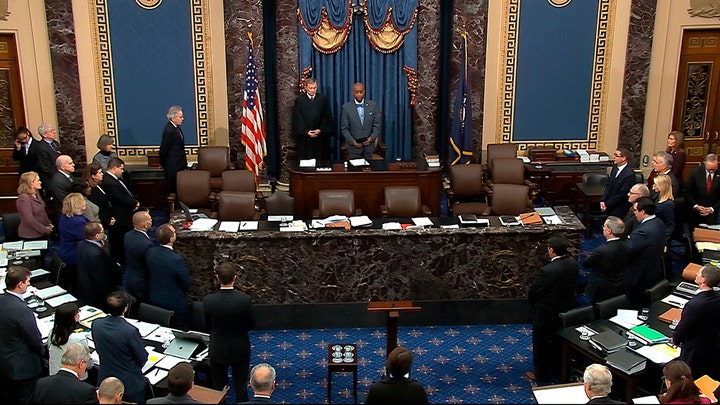 He said the timing of these events “are totally irrelevant."

"Pardon me for seeming somewhat cavalier about it, but we're talking about an impeachment trial. Nothing we do as senators will be more important," Blumenthal said.

Earlier in the day, several GOP senators grumbled at the prospect of the trial continuing past Friday. Many expressed frustration that Trump got impeached on what they believe is a flimsy case and they want the trial to end as soon as possible.

“Let’s go and get this over with for the sake of the American people,” Sen. Lindsey Graham, R-S.C., said.

Sen. Mike Braun, R-Ind., said Trump will be able to give a State of the Union address on Tuesday successfully even if he hasn’t been acquitted just yet.

“He would be able to do almost anything most other individuals couldn't,” Braun said.