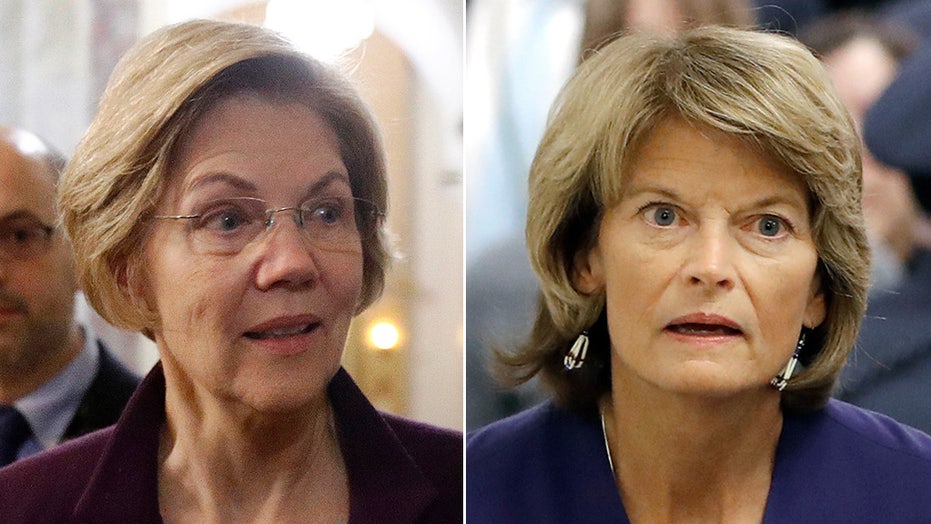 Sen. Lisa Murkowski, R-Alaska, seemed to slight Sen. Elizabeth Warren, D-Mass., in her Friday statement announcing that she would not vote to hear witnesses in the impeachment trial of President Trump, as she admonished senators for "attacking" Supreme Court Chief Justice John Roberts.

During the question-and-answer portion of the Senate's impeachment trial Thursday, Warren submitted a question referencing the chief justice, which Roberts was obliged to read per Senate rules governing the trial. The question prompted Roberts to shoot a visibly irritated look in what appeared to be Warren's direction.

Murkowski seemed to note the exchange in her Friday statement as a potentially decisive factor contributing to her vote.

"It has also become clear some of my colleagues intend to further politicize this process, and drag the Supreme Court into the fray, while attacking the chief justice," Murkowski said.

"I will not stand for nor support that effort," she continued. "We have already degraded this institution for partisan political benefit, and I will not enable those who wish to pull down another. We are sadly at a low point of division in this country."

Warren's question Thursday intimated that through their behavior and by not allowing witnesses, Senate Republicans were chipping away at the legitimacy of the Supreme Court, a generally trusted institution with a nonpartisan reputation that Roberts has gone out of his way to preserve.

MURKOWSKI COMES OUT AGAINST IMPEACHMENT WITNESSES, PUTTING TRUMP ON PATH TO ACQUITTAL

"At a time when large majorities of Americans have lost faith in government, does the fact that the chief justice is presiding over an impeachment trial in which Republican senators have thus far refused to allow witnesses or evidence contribute to the loss of legitimacy of the chief justice, the Supreme Court, and the Constitution?" Roberts read from the card on which Warren wrote her question.

Murkowski's statement seemed to imply that it was Warren and Democrats who "have already degraded our institution for partisan political benefit, and I will not enable those who wish to pull down another."

The Alaska senator might have also been referring to Sen. Rand Paul, R-Ky., who had his own tense exchange with Roberts Thursday. Shortly after the trial opened for questions, Paul submitted a question that included the name of an individual who has been alleged to be the whistleblower whose complaint set the chain of events that put Trump's impeachment in motion.

Roberts placed the card face-down and said, "The presiding officer declines to read the question as submitted."

Paul, however, has been naming the alleged whistleblower for months and his actions were not as directly aimed at Roberts as Warren's.

Murkowski's no-vote also bails Roberts out of a potentially tough spot. With only two likely GOP votes for witnesses -- Sen. Susan Collins, R-Maine, and Sen. Mitt Romney, R-Utah. -- Republicans still have 51 votes to shut down a motion to hear witnesses. If Murkowski would have decided to vote to hear witnesses, potentially including former National Security Adviser John Bolton, Roberts, as the Senate's presiding officer, would have the option to break the tie one way or another, or decline to vote, which would result in the failure of the motion to subpoena witnesses and documents.

In any case, Roberts' choice would be the deciding factor in the vote, placing him in the middle of exactly the kind of political brawl he has so carefully avoided for years. Murkowski's commitment to vote against witnesses almost certainly saved Roberts from that scenario.