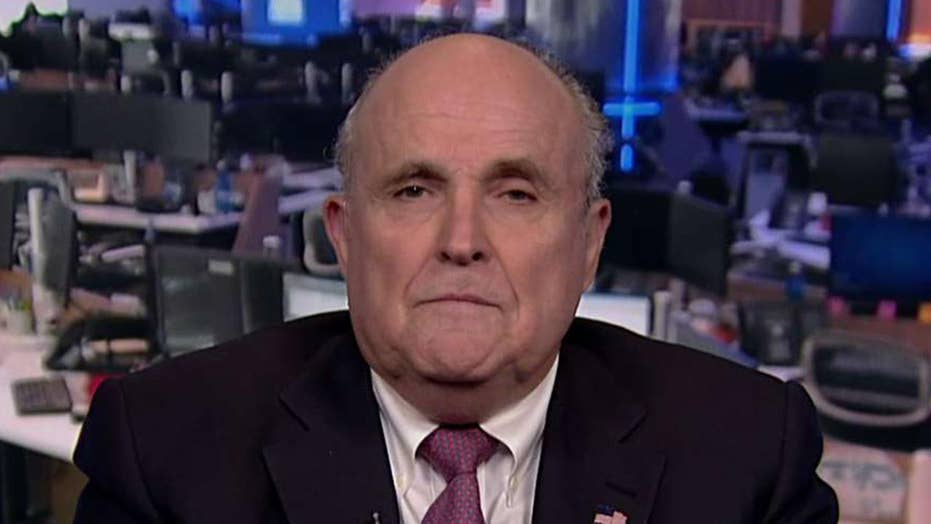 President Trump's personal attorney Rudy Giuliani slammed as an "idiot" a New York Times reporter during an interview Sunday on Fox News' "Media Buzz," saying it should be apparent that even honest clients run a major risk of falling into a so-called perjury trap if they agree to meet with federal investigators.

The Times' Nicholas Confessore argued on MSNBC this week that Giuliani's concerns that Trump might be charged with lying to investigators if he met with Special Counsel Robert Mueller's team revealed that "the president's story is wrong, it's a lie."

Giuliani unloaded on Confessore, saying prosecutors often aggressively pursue perjury charges even where the underlying truth of the matter involved is unresolved, and that it would be "malpractice" to ignore that threat.

"I don't know if he's deliberately being like that or if he's a complete moron, Giuliani said.  "The reality is, you can be accused of perjury when you're telling the absolute truth. Let me give you an example for that idiot -- which I attribute, really, to the malice of the New York Times."

Giuliani then offered an extended hypothetical to illustrate his point.

"I didn't come to your house last night," Giuliani said to host Howard Kurtz, by way of example. "You're lying, and you say I did come to your house. They put me under oath and I say, I didn't come to Howie's house last night.  But they elect to believe Howie, even though Howie lied about it twice. I have no control over that. That's what they did to Martha Stewart. And since that case, all of us lawyers have been very careful."

In 2004, Stewart was convicted of conspiracy, obstruction and perjury charges after a judge threw out the securities fraud case against her, which was widely considered the more substantial legal issue. And former MLB superstar Barry Bonds was convicted of obstruction of justice for allegedly giving an incomplete answer on a grand jury questionnaire, but that conviction was overturned in 2015.

Both episodes have been cited as high-profile examples of so-called perjury traps, in which prosecutors secure convictions for lying or telling half-truths without being able to prove any underlying offense.

Giuliani said Sunday that Trump would testify that he did not speak to Comey specifically about giving Flynn a "break" for the purpose of obstructing the Russia probe, which matches Comey's sworn testimony. But, Giuliani suggested, that hypothetical Trump testimony could still be contested at trial by Comey or others, leading to a plausible prosecution for perjury.

Despite "hysterical" media coverage, Giuliani said he still expects the Mueller probe to wind down by September.

Giuliani added that many in the media don't fully understand how to follow the Trump team's legal arguments, which he said often involve hypothetical situations that are not intended to be admissions of guilt. Giuliani's comments earlier this year that the president legally might be able to pardon himself were widely interpreted as a suggestion that Trump was seriously considering the possibility.

Still, despite what he characterized as unfair coverage, Giuliani said it's necessary to address the Mueller probe in the court of public opinion by continuing to make regular media appearances. He compared the public to "our grand jury."

"The reality is, this is not a court case," Giuliani said. "The president can't be indicted. They've acknowledged that."