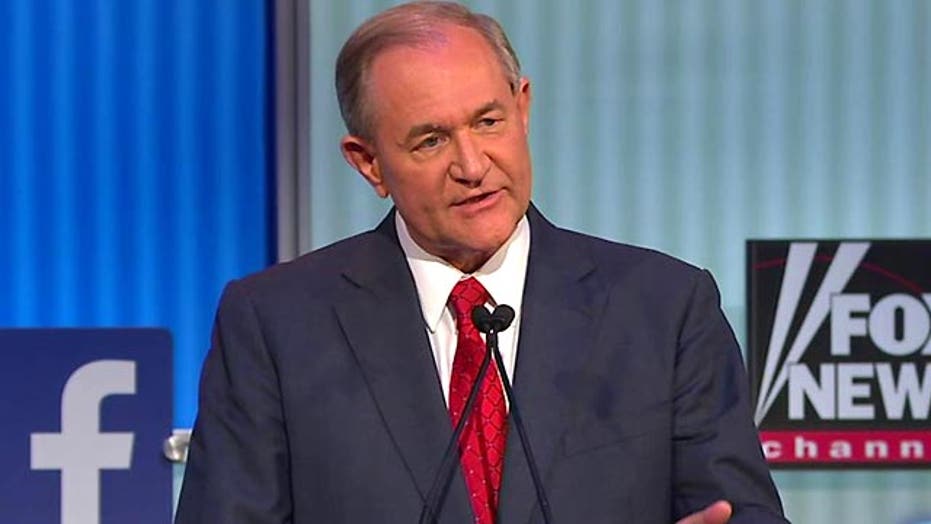 The campaign for 2016 Republican presidential hopeful Jim Gilmore is downplaying the candidate failing so far to qualify for the second GOP primary debate of the season, arguing it will eventually recover from the late start.

Gilmore, a former Virginia governor, essentially needs to get 1 percent of the vote in major polls to qualify for the Sept. 10 debate.

“We didn’t expect to be on the polls,” Gilmore senior campaign adviser Boyd Marcus told FoxNews.com on Wednesday. “We’ve been in this campaign for 13 days and we’re against people who have been here for months and months. We started off behind, and we’re going to catch up.”

The debate is being hosted by CNN and will be at the Ronald Reagan Presidential Library, in Simi Valley, Calif.

Right now, Gilmore is not listed among the top 16 GOP candidates, according to an averaging of the most recent polls by the nonpartisan website RealClearPolitics.com. South Carolina Sen. Lindsey Graham is in 15th and last place with 0.6 percent of the vote.

“We’re used to making things work that people say can’t be done,” said Marcus, Gilmore’s former chief of staff. “We will start climbing the lateral polls after we are campaigning for a while.”

Still, the Gilmore campaign is showing some signs of life.

All of them competed in a forum before the main Fox News debate that featured the top-10 ranked GOP candidates, based on polls.

“We didn’t come up with the best clips at the debate,” Marcus said about Gilmore’s performance. “But he showed people he understood the issues, had substantive things to say about them, and that he wasn’t just a guy who walked in off the street saying he wants to run for president.”

Team Gilmore said the candidate will focus on the key issues that define him as a candidate -- foreign policy, gun rights and jobs and the economy.

“We have a campaign plan, and a strategy, and we’re pursuing it,” Marcus said. “We don’t have the resources of some of the other candidates, and there is no reason to pretend we do. But we have enough resources to pursue the strategy we’ve created, and that’s what we’re going to do.”

Marcus, who was an adviser for Democrat Terry McAuliffe’s successful 2013 bid become Virginia governor, also said that regardless of the polls and success of the campaign, Gilmore will never be the “flashy” guy.

“He has been the underdog in every race he’s ever run,” Marcus said. “He’s won three of them, and he’s lost one. He is the guy who keeps working hard. Plus, right now, everyone is the underdog to Trump, so right now, I think we’re all in the same boat.”