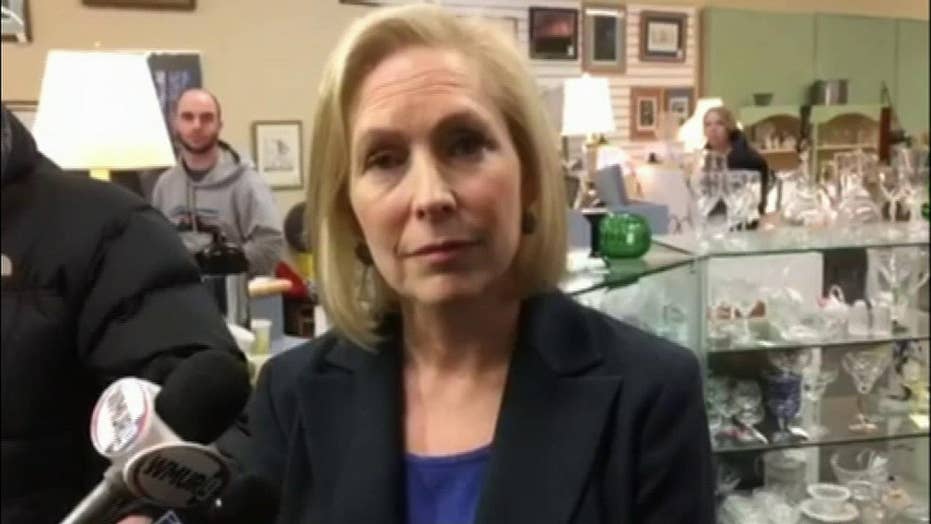 Gillibrand on tearing down existing border walls: 'If it makes sense, I could support it'

Sen. Kirsten Gillibrand, D-N.Y., a 2020 Democratic presidential hopeful, was interrupted while campaigning in Iowa on Monday by someone who just wanted condiments for her food.

Speaking at The Airliner in Iowa City, the senator talked with voters when one patron — University of Iowa student Hanna Kinney — appeared to try to scooch past.

Gillibrand, in a video tweeted by a CNN reporter, appears to warmly touch Kinney's shoulder, as if to include her in conversation.

But Kinney didn't want to join in, simply saying, "sorry, sorry — I'm just gonna get some ranch," as she raises her hands and pushes through the mob of reporters and photographers.

The crowd broke out in laughter in the video, as Gillibrand continued her campaigning.

Breaking down the 2020 Democratic candidates and their platforms

Kinney told Fox News on Tuesday night she had no idea that Gillibrand was campaigning at The Airliner, where she dines each Monday night for bible study. She added that living in Iowa her entire life, she understands that caucuses are approaching but she "definitely wasn't there for that reason."

The college senior said that Gillibrand and the crowd were sitting in a "kind of a major intersection" near the hostess podium in the restaurant.

She noted that in the video, Gillibrand gently touches her shoulder, but said she doesn't recall the moment.

Since she's at the restaurant so often, Kinney claimed she is "the designated ranch go-getter" and that staff at The Airliner gave her "a little squeeze bottle of it."

Once Kinney got her ranch, she said she had to move back throughout the restaurant in the same direction. She told Fox News that the crowd cheered her on when she confirmed she got the dressing.