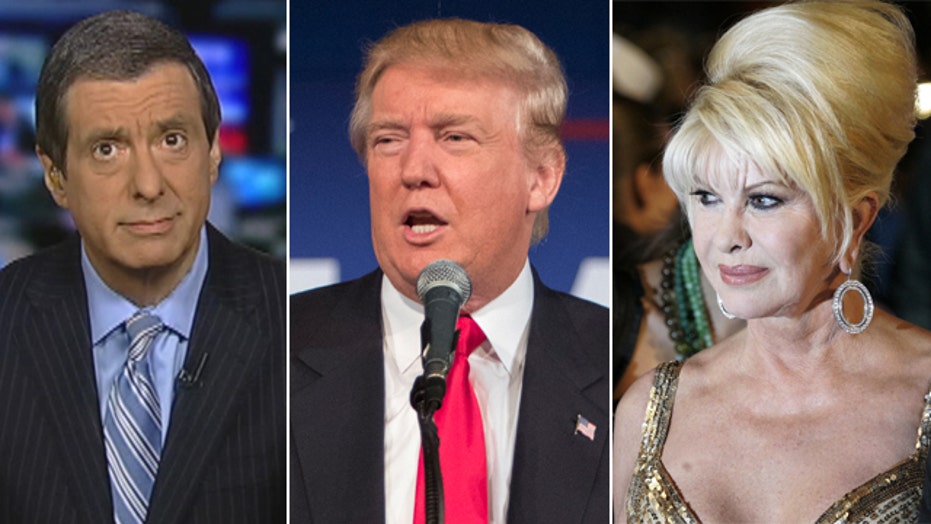 Kurtz: A blast from Trump's past

When Donald and Ivana Trump had the ugly breakup that turned into a tabloid war, I was all over it.

As a reporter in New York back in 1990, I covered every twist and turn: Donald’s side accused his estranged wife of demanding $150 million and the Plaza Hotel, while Ivana’s side accused him of having an affair with Marla Maples (who later became Trump’s second wife). Maples said the former Czech model “had to know” of their relationship. Ivana accused Donald of barely seeing their three children. It was a tragi-comedy of epic proportions.

But the whole mess took place a quarter century ago. Trump is happily married to his third wife, Melania. Yet as Trump has rocketed to the top of the GOP presidential polls, that period is suddenly back in the news.

The Daily Beast ran this tabloid-style headline: “Ex-Wife: Trump Made Me Feel ‘Violated’ During Sex.”

There’s no way, in my view, that this story should have been published.

It’s not that Trump’s multiple marriages or affairs should be off limits. I asked him in our recent Trump Tower interview if his personal history rendered him a questionable role model (he replied that people know who he is). Newt Gingrich faced similar questions about his three marriages in 2012, and savaged CNN’s John King for asking about it at the beginning of a debate.

But we’re talking here about a single allegation, made in the heat of a highly contested divorce, that Ivana largely walked back then—and dismisses today.

And to tie that to Trump’s controversial comment about Mexican illegal immigrants including “rapists” is to use a very thin reed indeed.

This was first reported by a 1993 book, “Lost Tycoon,” based on an Ivana deposition. According to that account, an angry Trump “tore off her clothes and unzipped his pants,” then had sex with her “for the first time in more than sixteen months. Ivana is terrified.” The author calls it a “violent assault” and says that in “versions” that Ivana repeated to some confidantes, “he raped me.”

Except Donald Trump denied it. Except Ivana Trump issued a statement that was included in the book:

“On one occasion during 1989, Mr. Trump and I had marital relations in which he behaved very differently toward me than he had during our marriage. As a woman, I felt violated, as the love and tenderness, which he normally exhibited towards me, was absent. I referred to this as a ‘rape,’ but I do not want my words to be interpreted in a literal or criminal sense.”

What a scoop, huh?

Now it would be one thing if Ivana was making this allegation today. Instead, the first Mrs. Trump issued this statement to CNN yesterday:

“The story is totally without merit. Donald and I are the best of friends and together have raised three children that we love and are very proud of. I have nothing but fondness for Donald and wish him the best of luck on his campaign. Incidentally, I think he would make an incredible president.”

That’s the “victim” presented by the story.

I’m sorry, but the piece in the Beast, where I once worked, reads like a hit job calculated to harm Trump. It encapsulates everything that people hate about the media. And I knew even before The Donald went on Greta Van Susteren’s show that he would use it to attack the media, and that his words would resonate.

Trump told Greta this was a "false" allegation from a "failing website" that "never happened," and that "it's amazing what the press is allowed to get away with." Trump told the Fox host that "you shouldn't even be asking the question" after reading Ivana's statement, but then allowed it was "a semi-fair question."

John Avlon, the Beast’s editor-in-chief, defended the story to me by email:

“The fact that Trump kicked off his presidential campaign by accusing undocumented Mexican immigrants of being ‘rapists’ made the allegations recounted in the 1993 book ‘Lost Tycoon’ newly relevant. And, as we recounted, while editions of the book contained a clarification by Ivana and her lawyers subsequent to her lucrative divorce settlement, she notably did not contest having described the incident with her ex-husband as ‘rape.’”

In my view, the only instructive thing to come out of this story was the incredibly harsh reaction by Trump’s counsel, Michael Cohen. Here is some of what he told a Beast reporter:

“I will make sure that you and I meet one day while we’re in the courthouse. And I will take you for every penny you still don’t have. And I will come after your Daily Beast and everybody else that you possibly know,” Cohen said. “So I’m warning you, tread very f--- lightly, because what I’m going to do to you is going to be f--- disgusting. You understand me?”

“You write a story that has Mr. Trump’s name in it, with the word ‘rape,’ and I’m going to mess your life up… for as long as you’re on this frickin’ planet… you’re going to have judgments against you, so much money, you’ll never know how to get out from underneath it.”

Avlon seized on this, telling me: “Frankly, the newsworthiness of the story was dramatically increased by Trump counsel Michael Cohen’s attempt to threaten our reporter Tim Mak as well as his factually-challenged assertion that there is no such thing as ‘marital rape.’

“The Beast isn’t intimidated. You reap what you sow, and when you run for president, your past actions are a matter of public interest. They reveal character just as much as Michael Cohen’s comments reflect the fact that tone comes from the top of every organization.”

“As an attorney, husband and father there are many injustices that offend me but nothing more than charges of rape or racism. They hit me at my core. Rarely I surprised by the press, but the gall of this particular reporter to make such a reprehensible and false allegation against Mr. Trump truly stunned me. In my moment of shock and anger, I made an inarticulate comment — which I do not believe — and which I apologize for entirely.”

I get tough-minded lawyers. But while those kinds of tactics may work with the entertainment press, they are jarringly out of place in a presidential campaign.

I don’t want to sound dismissive about marital rape. I just think we ought to take an allegation in a nasty divorce, now all but retracted, with enormous skepticism.

Look, Trump thrives on being attacked. He’s a great counterpuncher. He particularly relishes doing battle with the media. And this latest story hands him a big fat gift to do just that.