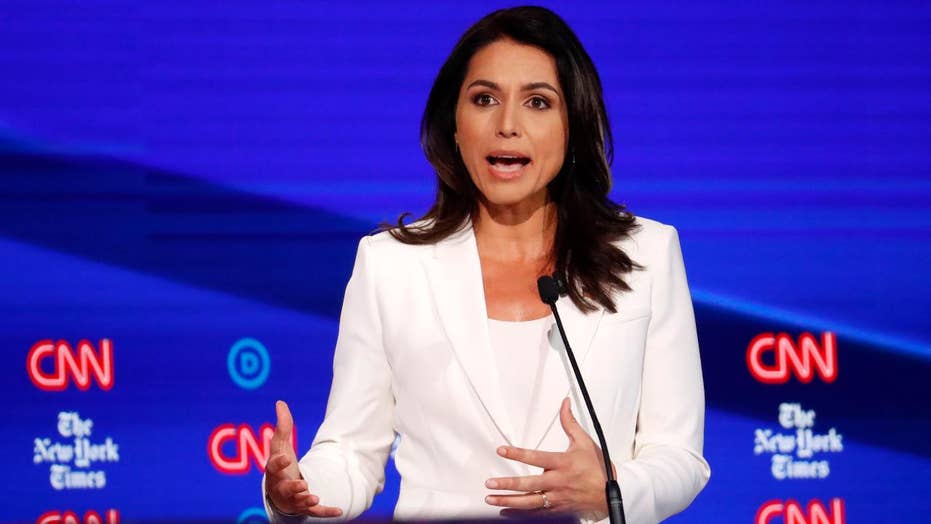 Democratic presidential candidate Rep. Tulsi Gabbard of Hawaii is accusing former Secretary of State Hillary Clinton of defamation over a recent statement that implied Gabbard was a Russian asset and is demanding that Clinton issue a retraction.

A letter from the Gabbard campaign’s legal counsel insisted that Gabbard is not a Russian asset, and that Clinton knew the statement was untrue when she said it.

“In making the statement, you knew it was false. Congresswoman Gabbard is not a Russian asset and is not being groomed by Russia,” the letter said. “Besides your statement, no law enforcement or intelligence agencies have claimed, much less presented any evidence, that Congresswoman Gabbard is a Russian asset. This fabricated story is so facially improbable that it is actionable as defamation.”

The letter is part of Gabbard’s continuing pushback after Clinton appeared on the podcast Campaign HQ with David Plouffe on Oct. 17. During the conversation, Clinton said, “I’m not making any predictions, but I think they’ve got their eye on somebody who is currently in the Democratic primary and are grooming her to be the third-party candidate. She’s the favorite of the Russians. They have a bunch of sites and bots and other ways of supporting her so far. And, that’s assuming Jill Stein will give it up, which she might not because she’s also a Russian asset. Yeah, she’s a Russian asset. I mean, totally.”

The following day, a CNN reporter asked a Clinton spokesperson if Clinton was talking about Gabbard, to which the spokesperson said, “If the nesting doll fits,” implying that the statement was indeed about Gabbard.

Early reports about Clinton’s comments said that the former secretary of state meant that Gabbard was being groomed to be a third-party candidate by Russians, but it was later clarified that she was referring to Republicans. The Gabbard campaign counsel’s letter accused Clinton of putting a “spin” on the statement to avoid liability.

“This Republicans-not-Russians spin developed only after you realized the defamatory nature of your statement, and therefore your legal liability, as well as the full extent of the public backlash against your statement,” the letter said.

Gabbard has gone on record stating she has no intention of running as a third-party candidate if she fails to win the Democratic nomination.

The letter concluded by presenting a statement for Clinton to post on her Twitter account, and to send to major media outlets, apologizing. The proposed statement would say that she “was wrong,” made a “grave mistake and error and judgment” and that she "support[s]" and "admire[s]" Gabbard’s work.

The letter also demanded that Clinton “immediately” hold a press conference to make a verbal retraction of her past statement.

Fox News reached out to the Gabbard campaign asking if the congresswoman intends to sue if Clinton does not meet these demands, but they did not immediately respond.