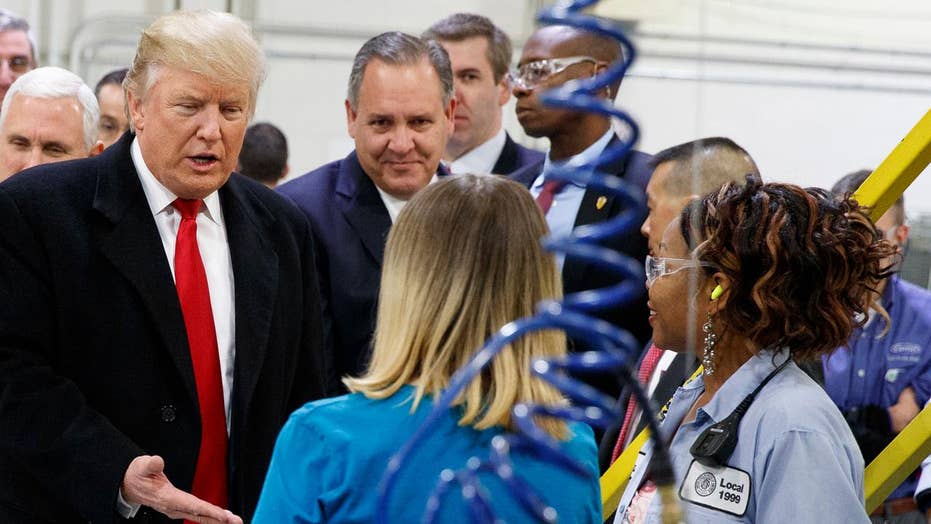 Trump makes good on Carrier promise as he mulls over Cabinet

The president-elect has indicated that he'll use a combination of incentives and threats to keep other companies from leaving; John Roberts reports for 'Special Report'

American voters express more faith in private businesses than government to improve the economy -- and have mixed views on President-elect Donald Trump’s intervention in a private business to keep jobs in the United States.

The latest Fox News Poll asks about one of Trump’s first major actions since the election: Convincing the air conditioner and heater manufacturer Carrier to keep several hundred jobs in Indianapolis rather than moving them to Mexico.  In return, Carrier got $7 million in state tax breaks.  Vice president-elect Mike Pence is the outgoing governor of Indiana.

Trump’s action with Carrier split voters -- 41 percent think it was appropriate for Trump to intervene after the manufacturer decided to move jobs to Mexico.  The exact same percentage believes it was inappropriate.  One in five is unable to say (19 percent).

Voters also divide on the role of government generally.  Some 43 percent feel the government is doing too much and is “too involved in things better left to individuals and businesses,” while 44 percent say “government should do more to solve the problems facing the country today.”

More than twice as many voters trust market forces and private businesses (57 percent) over the government and politicians (24 percent) to improve the economy.  In 2012, 65 percent were more inclined to trust the market and 20 percent the government.

One in four conservatives (24 percent) and about one in 10 Republicans (12 percent) disagree with Trump’s actions on Carrier.

Overall, by a two-to-one margin, voters believe Trump will revise trade deals to make them more favorable to the United States (62-31 percent).

That’s more than expect him to follow through on other campaign promises, such as building a wall along the U.S.-Mexico border (34 percent say he truly will), defeating ISIS (34 percent), deporting millions of illegal immigrants (39 percent), and reducing government corruption in Washington (43 percent).

The promise the largest number of voters expect Trump to keep?  Obamacare.  More than two-thirds of voters (68 percent) believe he will repeal and replace it -- although only half want that to happen (49 percent).

There’s been a significant decline in a couple of those expectations since the election.  The number believing the wall will be built is down 20 percentage points since May, when 54 percent thought it would happen.  And the belief that illegal immigrants will be deported is down 11 points from 50 percent.