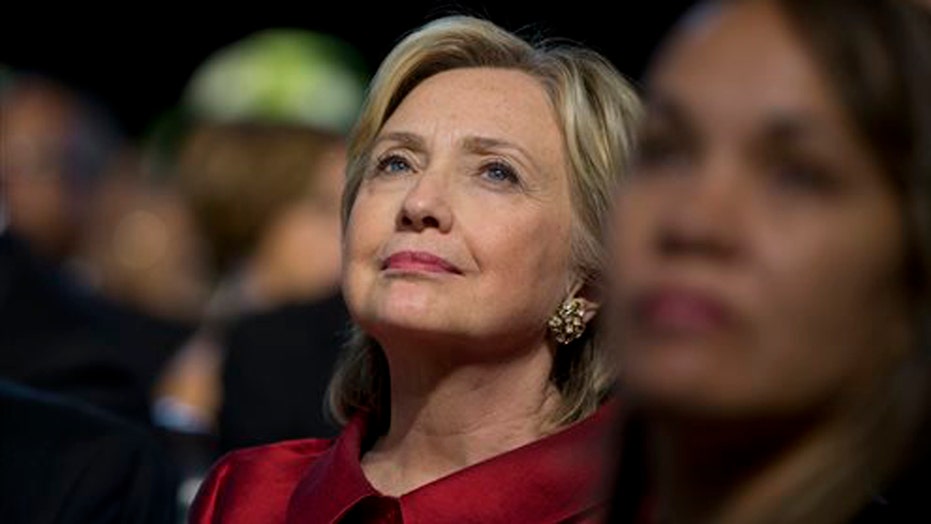 Strategy Room: Jessica Proud and Ellen Ratner debate whether or not Clinton has lost support due to controversy

Hillary Clinton’s personal favorable ratings hit a low mark in the latest Fox News national poll, while Ben Carson’s ratings climb to new high in the wake of his news-generating comments on Muslims and the presidency.

Carson receives the best net favorable scores among all voters as well as self-identified Republicans.  In addition, Donald Trump and Jeb Bush get the worst net scores overall, and Bush has the lowest score among Republicans.

Some 38 percent of voters view Clinton favorably, down from 45 percent in May.  The downward shift comes from the fact that half of women now rate her negatively.  Positive views among Democrats are also down since May (-11 points).

Overall, a record high 56 percent of voters now have an unfavorable opinion of Clinton.  For comparison, Bush’s negative rating stands at 55 percent, up from 44 percent in May.  More on him later.

The number of voters who have a positive opinion of Carson is up 20 percentage points:  46 percent now, up from 26 percent in May.  Among Republicans the increase is even greater: 66 percent now view him favorably, up from 42 percent.

Interviewing for the poll started Sunday afternoon and went through Tuesday evening (September 20-22). That Sunday morning, Carson made news with remarks about Sharia law and why he would not support a hypothetical Muslim in the White House.

Carly Fiorina’s ratings also jumped: 38 percent of voters have a favorable opinion of her today. It was 13 percent in May.  Among Republicans, she’s at 52 percent favorable now, up from 22 percent.

None of the people tested -- not the president, not the vice president and not the 2016 contenders -- garner positive ratings from at least 50 percent of the electorate.  Vice President Joe Biden comes closest.  His favorable stands at 49 percent, up from 43 percent in March.

While each of the GOP candidates included in the poll has a net positive rating among Republicans, there are big differences.  For example, Carson is way ahead of the pack with a net positive score of +52 points, while Bush has about as many Republicans viewing him positively as negatively for a net rating of +1.  Here are the scores for the other candidates tested: Marco Rubio (+35), Fiorina (+30), Ted Cruz (+21), Trump (+12), Chris Christie (+4) and John Kasich (+3).

While only 34 percent of all voters have a favorable opinion of Trump, some 53 percent of Republicans like him.

Cruz’s positive ratings have held steady, but negative ratings of him are up 10 points among Republicans.

The Fox News poll is based on landline and cell phone interviews with 1,013 randomly chosen registered voters nationwide and was conducted under the joint direction of Anderson Robbins Research (D) and Shaw & Company Research (R) from September 20-22, 2015. The poll has a margin of sampling error of plus or minus three percentage points for all registered voters, and 5 points for Democrats and 4.5 points for Republicans.