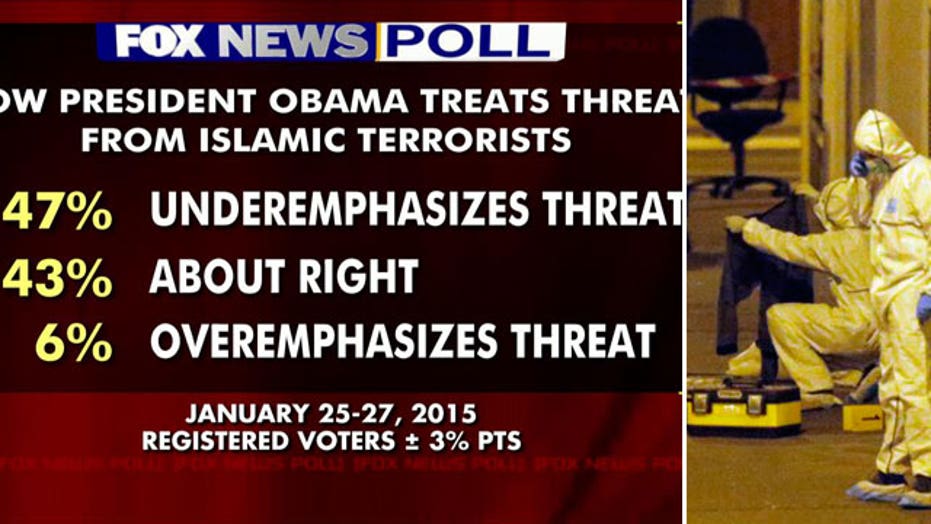 There’s widespread belief among American voters that an attack on U.S. soil by Islamic terrorists will happen in the near future. And at the same time, nearly half say President Obama underemphasizes the threat from Islamic terrorists.

Click here to view full results of the poll (pdf)

Here are 10 takeaways on the war on terrorism from a new Fox News national poll, released Wednesday. Voters feel:

- Islamic terrorists will try to attack the homeland soon.

- The United States is at war with radical Islam.

- Obama underemphasizes the threat from Islamic terrorists, yet the reason he doesn’t use terms like radical Islam is not because he doesn’t think the threat is directly connected to Islam.

- Closing the prison at Guantanamo Bay is the wrong thing to do.

- Terrorism comes in second only to the economy as the top priority facing the country.

- Killing terrorists with drones is not how the U.S. should deal with them.

- Obama should have marched with other world leaders in Paris to show solidarity against terrorist attacks there.

- White House policies toward the Middle East have mostly failed.

- Terrorism is seen as the greatest risk to future generations.

Here are the details:

An overwhelming 84-percent majority thinks it is at least somewhat likely Islamic terrorists will try to launch an attack on U.S. soil soon. That includes half -- 50 percent -- who say “very” likely.

Voters ages 45 and over are far more inclined (59 percent) than younger voters (39 percent) to think an attack is “very” likely to happen.

How does Obama treat the threat? Nearly half -- 47 percent -- say he underemphasizes the threat. That’s about eight times as many as say he overemphasizes it (six percent). Another 43 percent say his approach is “about right.”

Obama continues to move forward with plans to close the Guantanamo Bay detention center, but a 58-percent majority says that’s the wrong thing to do. About a third agrees with his decision to do so (32 percent). Most Republicans (81 percent) and over half of independents (55 percent) say it’s wrong to close Gitmo. Among Democrats, 49 percent say it’s the right thing to do, while 38 percent disagree.

There have been more than four hundred drone strikes in Yemen and Pakistan during Obama’s time in office that have reportedly killed an estimated total of more than 2,700 terrorists or militants. Voters think the better way for the U.S. to deal with terrorist suspects is to capture, interrogate and try them in a military court (60 percent). Only about a quarter agree with the administration’s killing them with drones (24 percent).

As rebels take over the government in Yemen and U.S. negotiations with Iran stall, more than half of voters -- 54 percent -- say the administration’s policies toward hot spots in the Middle East have mostly failed. Just 29 percent say the policies have mostly succeeded. By a 19-point margin Democrats say the policies have succeeded, while Republicans overwhelmingly say they have failed by 68-points.

More than six in 10 voters (62 percent) say President Obama should have gone to Paris to march with other world leaders after the recent terrorist attacks there, including a 52-percent majority of Democrats.

The poll asks voters why they think Obama doesn’t use terms like radical Islam or Islamic terrorism. While 14 percent say it’s because he doesn’t think the terrorist threat is directly connected to Islam, most (70 percent) think there is another reason. The poll did not ask what the other reasons might be.

Terrorism comes in second only to the economy as the most important issue for Congress and the president to work on right now. A third of voters (32 percent) continue to rank the economy as the top issue. That’s about the same as felt that way in September (34 percent), yet down from 49 percent who felt that way a year ago. Terrorism comes in at 14 percent, down from 19 percent in September, but up from just three percent last January. It’s followed by health care at 11 percent and the federal deficit and immigration at 10 percent each.

Among voters under age 30, who are at least some of the people Obama was talking about as a future generation -- nearly half of them-- 47 percent -- think terrorism is the greatest threat, followed by climate change at 29 percent and Iran with nukes at 17 percent.

The Fox News poll is based on landline and cell phone interviews with 1,009 randomly chosen registered voters nationwide and was conducted under the joint direction of Anderson Robbins Research (D) and Shaw & Company Research (R) from January 25-27, 2015. The full poll has a margin of sampling error of plus or minus three percentage points.