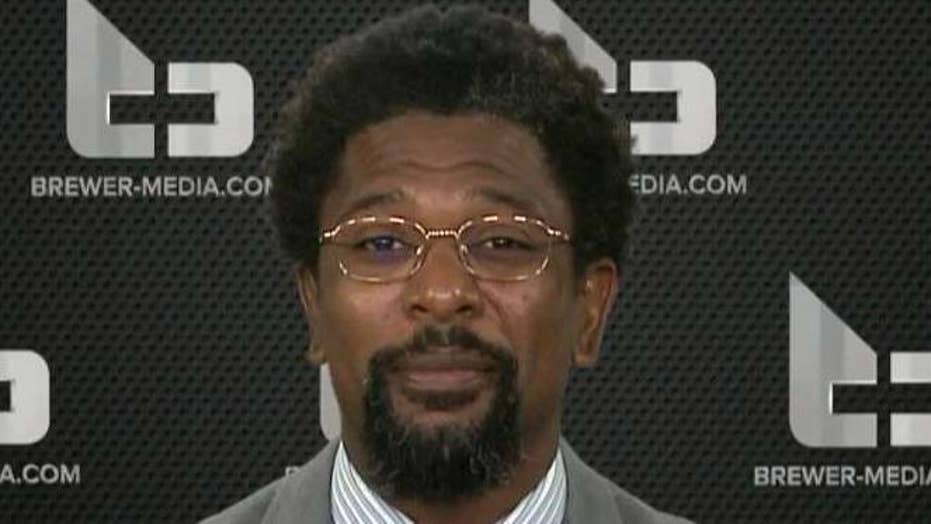 Former NFL player Jack Brewer says liberals will stand against President Trump even if it means standing against the things they believe in.

The affair largely involved the black leaders in attendance praising the president as Trump touted his record -- while taking shots at the media. The player who made the comment was Jack Brewer, a former NFL safety who played college ball at Southern Methodist University before embarking a five-year journeyman pro career. Brewer is also an ordained minister, a professor at Fordham University and a vocal pro-Trump booster on social media.

"I've got to say this because it's Black History Month. Man, you're the first black president," Brewer said as the event was winding down.

Trump, obviously, is white and is not the first black president. Former President Barack Obama earned that distinction in history after his 2008 election to the office.

Brewer, however, was likely calling back to the "first black president" nickname given to former President Bill Clinton after novelist Toni Morrison called him that in the New Yorker in 1998, citing Clinton's upbringing and other characteristics.

Silk, just before Brewer's comment, had told the president she sees it as imperative that black voters, who only supported Trump at an 8 percent clip in 2016, vote Trump in 2020.

"You did ask four years ago, 'what the hell do we have to lose?'" she said, citing Trump's 2016 campaign pitch to African-Americans. "But if we don't vote right this time, we're going to have a hell of a whole lot to lose."

Silk continued, repeating a line she and Diamond use in their online videos: "Make sure you vote right so you won't get left."

The Trump re-election campaign appears to be hoping that increasing its black support from 8 percent to even the low teens could potentially put the president over the top in November and is leaning on the economy and the criminal justice reform bill Trump signed to make the case.

This effort comes, however, as Democrats are calling Trump a bigot on the campaign trail, citing accusations of racism that have dogged his 2016 campaign and his presidency -- including when Trump drew bipartisan criticism for struggling to clearly and swiftly condemn white supremacists following deadly protests in Charlottesville, Va., in 2017.