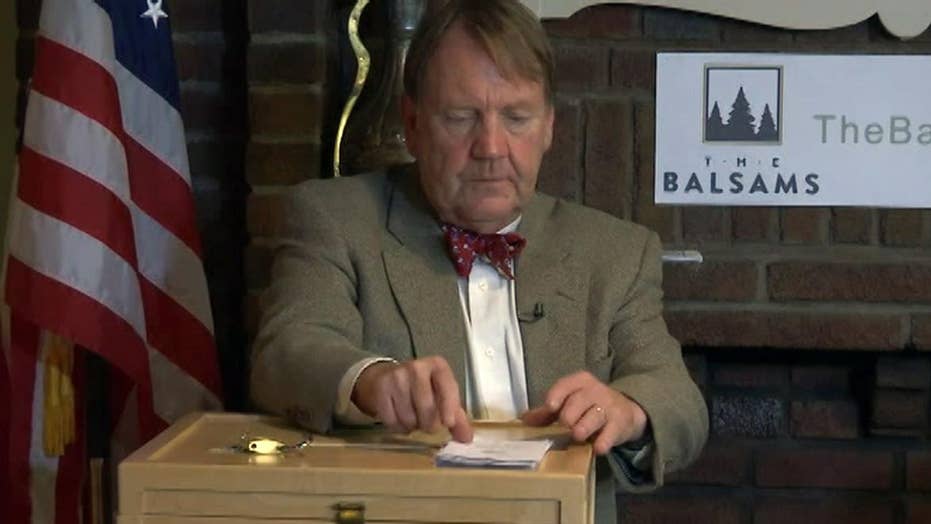 ‘First in the nation’ election tradition in New Hampshire at risk

There’s a battle right now over who gets to cast a ballot in the early primary state of New Hampshire. This comes as the state’s iconic “first in the nation” polling location in Dixville Notch faces an investigation into its voter rolls in the 2016 contest.

DIXVILLE NOTCH, N.H. — Every four years, at the stroke of midnight, a small New Hampshire town 20 miles south of the Canadian border with fewer than a dozen residents is thrust into the national spotlight.

The town of Dixville Notch comes together to cast its primary votes all at once, the minute the polls open, billing itself as the very first in the nation.

"Every four years, Dixville voters get their five minutes of fame," said Tom Tillotson, the town's election moderator. "Four minutes later, everybody's forgotten about us for another four years."

But the tradition is now at risk.

This comes amid scrutiny of the 2016 contest in Dixville Notch from election investigators at the New Hampshire Attorney General's office, New Hampshire Public Radio reports.

Dixville Notch Election Moderator Tom Tillotson prepares to count the ballots in the 2016 election, in which several votes were disputed. (FOX NEWS)

"We noticed some irregularities in the way that they were running their elections," said Assistant Attorney General Matthew Broadhead, who oversees the Election Law Unit. "And so we broadened the inquiry to the election officials as well."

Broadhead said that his team found some votes in the 2016 election were cast by individuals who did not live in the town, along with several other inconsistencies in the voter registration process. They were tipped off by a neighboring town's clerk who identified residents in her town watching coverage of the Dixville Notch primary, the Attorney General's preliminary report said.

Eight people voted in Dixville Notch in 2016. Since the investigation began, the voter roll is down to just five — the minimum amount of people needed for the town to hold an election in the state of New Hampshire.

Those five people are Tillotson, his wife, his son, and two people working to reopen the shuttered Balsams Resort in the center of town.

In its heyday, the Balsams used Dixville Notch's elections as an attraction in the slow winter months in the North Country.

CASTRO TOUTS EXPERIENCE, POLICY SPECIFICS, AS HE CONTRASTS HIMSELF WITH BETO O’ROURKE

Since 2011, the 150-year-old resort has sat vacant in the serenity of New Hampshire's wilderness. When Balsams and a nearby factory closed, it took all of the people working there with it, leaving a ghost town.

Although there are now several other small New Hampshire towns that participate in midnight voting, in 1960 Dixville Notch became the first. Tillotson said Dixville Notch is emblematic of full democracy in action.

"The whole point of Dixville voting Is not to get publicity," Tillotson said. "The whole point is to encourage people to get out and vote—to lead by example. Here's a little town where a hundred percent of the population gets up at midnight. That's not easy."

Although Dixville Notch dubs itself "First in the Nation," several other small New Hampshire towns participate in the tradition. (ROB DIRIENZO / Fox News)

While the fate of the tradition rests on the Balsams project, elsewhere in the state a slew of proposed changes to New Hampshire voting laws could completely transform elections in the state.

In the state legislature, which Democrats recently regained control of, close to 60 bills have been proposed to change nearly every facet of the election process. Some bills seek to reform lobbying rules and how campaigns are funded, while much of the focus has been on voter eligibility rules.

The New Hampshire American Civil Liberties Union has sued the state, claiming a new law requiring a drivers' license to vote is unconstitutional.

"Now, anybody who votes in New Hampshire will have to get a New Hampshire driver's license and register their car in New Hampshire and that can cost hundreds of dollars here," said Henry Klementowicz, staff attorney for the New Hampshire ACLU. "That is a fee that they'll have to pay simply as a consequence of voting. So we think that's a poll tax and that's wrong."

While that lawsuit is pending, Democrats in New Hampshire legislature will have an uphill battle passing legislation with Republican Gov. Chris Sununu in the governor's mansion.

Meanwhile, back at Dixville Notch, Tillotson hopes the Balsams project will prevail so the tradition will live to see the 2020 election.

"I don't think I've accepted yet that Dixville Notch midnight voting is over," Tillotson said, looking downward. "So I'm optimistic. As I said there's a lot of good stuff happening inside. This project is looking forward more to go forward."