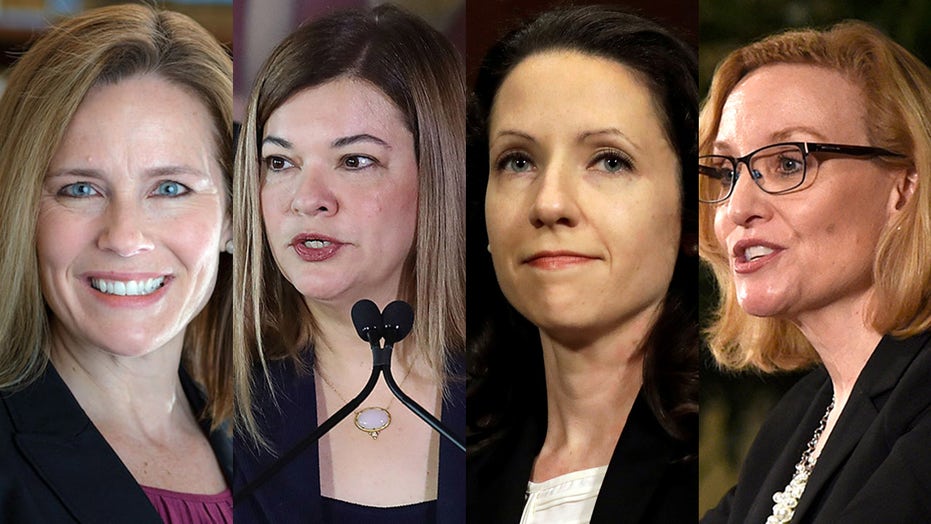 President Trump's list of potential Supreme Court contenders has narrowed to a handful of women to replace the late Justice Ruth Bader Ginsburg, who was considered a trailblazer for women's rights and the face of the liberal bloc of the Supreme Court for years.

"I think it will be on Friday or Saturday and we want to pay respect, it looks like we will have services on Thursday or Friday, as I understand it, and I think we should, with all due respect for Justice Ginsburg, wait for services to be over," the president said.

Trump said his list is down to five potential nominees, but it is unclear who the fifth person is.

Barrett is the highest-profile individual of the four contenders whose names are known. She is a former Notre Dame law professor who many believe would overrule Roe v. Wade if given the chance — making her a favorite of religious conservatives and causing Democrats to staunchly oppose her. She is a devout Catholic, which concerned some Democrats during her previous nomination hearing.

"The dogma lives loudly within you, and that's of concern," Senate Judiciary Committee Ranking Member Dianne Feinstein, D-Calif., told Barrett in 2017. She was eventually confirmed 55-43. Barrett, a former clerk for the late Justice Antonin Scalia, is 48 years old.

On the younger end of the spectrum is Rushing, a 38-year-old judge on the 4th Circuit.

Despite her age, Rushing's conservative bona-fides are seen as quite strong. She held three clerkships with three conservative judicial luminaries: Judge David Sentelle on the D.C. Circuit Court of Appeals, a Reagan appointee who is now the presiding judge of the U.S. Foreign Intelligence Surveillance (FISA) Court; then-Judge Neil Gorsuch on the 10th Circut, who was later appointed by Trump to the Supreme Court; and Justice Clarence Thomas on the Supreme Court.

She graduated from Wake Forest University and then went on to Duke University School of Law. Rushing's political past includes time as a volunteer legal adviser for Mitt Romney's 2012 presidential campaign.

In private practice, Rusing spent a lot of time on Supreme Court litigation, filing approximately 47 briefs with the tribunal, according to the Judiciary Committee questionnaire from her 2017 confirmation.

Democrats at the time slammed Rushing, with Vanita Gupta, the president and CEO of The Leadership Conference on Civil and Human Rights, saying that she "has denounced marriage equality, opposed remedies for discriminatory lending practices, and rejected efforts to end housing discrimination against domestic and sexual violence survivors."

Sen. Thom Tillis, R-N.C., however, praised Rushing as "a strong conservative choice who would uphold the Constitution."

Larsen previously served on the Michigan Supreme Court and was a University of Michigan faculty member before being appointed to the circuit court. She also clerked for Sentelle and Scalia and worked for the law firm Sidley Austin. She graduated at the top in her class at Northwestern University School of Law and has recently been a regular contributor to discussions for The Federalist Society, an association of conservative and libertarian lawyers.

Larsen's confirmation hearing was held jointly with Barrett's –­­ meaning she was largely overshadowed –­­ but her nomination was still divisive.

"Justice Larsen is and will be a jurist who seeks to find the right answer, never simply one she prefers as a matter of policy," then-Senate Judiciary Committee Chairman Chuck Grassley, R-Iowa said. "Colleagues on the court have praised her sharp legal analysis, her clear and crisp writing, and her work ethic."

But Gupta said Larsen has an "extreme ideology" and panned her work as a member of the Justice Department under President George W. Bush.

Lagoa is 52 years old and previously served on the Florida Supreme Court. She is a Cuban-American and garnered significant bipartisan support in the Senate when she was confirmed in an 80-15 vote in November 2019. High-profile Democrats voting yea on her nomination included Sen. Dianne Feinstein, D-Calif., the ranking member of the Judiciary Committee, Sen. Chris Coons, D-Del., also on the Judiciary Committee, and Sen Joe Manchin, D-W.V., a perpetual swing vote on judicial nominations.

Democratic pollster Fernand Amandi told Politico that if Trump chooses Lagoa it would be "a play for women, Hispanics and most importantly, Florida’s 29 Electoral votes," calling her "the conservative Cuban version of Sonia Sotomayor."

Whoever is selected by Trump, no matter how many Democrats voted for her previously, is sure to be at the center of a major political battle.

"The American people should have a voice in the selection of their next Supreme Court Justice. Therefore, this vacancy should not be filled until we have a new president," Senate Minority Leader Chuck Schumer, D-N.Y., said in a Friday tweet, telegraphing that Democrats would oppose anyone nominated by President Trump before the election or while he is a lame duck. Republicans have sworn to give any Trump nominee a floor vote.

Some Democrats have even threatened to pack the Supreme Court and get rid of the legislative filibuster -- threats they have been making for months -- in response to a Trump Supreme Court nominee being confirmed.

"Mitch McConnell set the precedent," Sen Ed Markey, D-Mass., tweeted. "No Supreme Court vacancies filled in an election year. If he violates it, when Democrats control the Senate in the next Congress, we must abolish the filibuster and expand the Supreme Court."

Senate Majority Leader Mitch McConnell, R-Ky., however, has made the argument that precedent is on the Republicans' side.