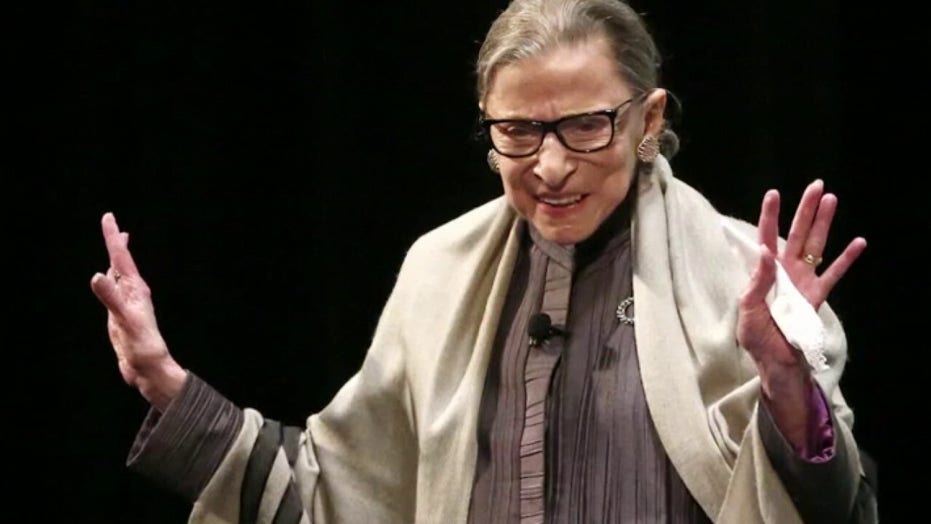 The 2020 presidential election, Senate races and the American political status quo have been turned upside-down  with the death of Supreme Court Justice Ruth Bader Ginsburg, as President Trump said Monday he is likely to forge ahead with plans to announce a high court nominee at the end of this week.

The fight to replace Ginsburg on the highest court in the United States, with a justice who could potentially tip the balance of the tribunal for decades, is shaping up to be one of the nastiest in recent American political history. And it comes as Americans were already dealing with several political crises and a high-stakes presidential election.

Within hours of Ginsburg's death, top members of the U.S. Senate and presidential candidates were laying down markers on what should be done with the newly-minted Supreme Court vacancy just weeks ahead of a presidential election.

"The American people should have a voice in the selection of their next Supreme Court Justice. Therefore, this vacancy should not be filled until we have a new president," Senate Minority Leader Chuck Schumer, D-N.Y., said in a Friday tweet.

Senate Majority Leader Mitch McConnell, R-Ky., however, said that "President Trump’s nominee will receive a vote on the floor of the United States Senate."

Democratic presidential nominee Joe Biden added Friday: "Let me be clear: The voters should pick a President, and that President should select a successor to Justice Ginsburg."

When the news first broke Friday night, President Trump was holding a rally, unaware of Ginsburg's passing. When he was informed by the media, he expressed his sadness. Trump later in the weekend said he intended to nominate a successor to Ginsburg, and the crowd at a subsequent Trump rally Saturday night chanted "Fill that seat!"

His campaign is already selling t-shirts emblazoned with the new slogan. And Trump Monday said on "Fox & Friends" that the Senate should vote on Ginsburg's successor before the presidential election.

Trump's past two Supreme Court appointments -- Justices Brett Kavanaugh and Neil Gorsuch -- filled in for Republican-appointed Justices Antonin Scalia and Anthony Kennedy. That means they did not significantly tip the balance of the court. Nevertheless, Democrats indicated that they intended to filibuster Gorsuch, prompting McConnell to nuke the Supreme Court filibuster, and resisted the Kavanaugh confirmation every step of the way in what became one of the ugliest episodes in modern American political history.

Now Trump and McConnell are intending to confirm a successor to Ginsburg: A former ACLU general counsel who was one of the hardest fighters for women's rights in the 20th Century. A Clinton-appointed, rock-solid liberal. "The Notorious R.B.G.," an unlikely pop-culture icon revered on the left the same way the right reveres Ronald Reagan.

So Democrats are already in open revolt.

Rep. Alexandria Ocasio-Cortez, R-N.Y., held a joint press conference with Schumer in Brooklyn Sunday night where she sent a stern warning that the Ginsburg vacancy would crystalize Democrats ahead of the presidential election.

Ocasio-Cortez added: "We all need to be more courageous and we all must act in unprecedented ways to make sure that our rights are stabilized... And to Mitch McConnell, we need to tell him that he is playing with fire. We need to make sure that this vacancy is protected, that our election continues and that the American people have their say."

Schumer, in the Senate minorty, has little he can do besides try to persuade Republican senators to vote against any Trump Supreme Court appointment, which he did Sunday in asking people to respect Ginsburg's reported wish that she be replaced only after the presidential election.

"And we only need two more senators to say that they will abide by RBG's wish, two have already said it," Schumer said. "We need two more. So Americans, if you care about all these rights, if you don't want big, powerful, wealthy special interests to turn the clock back 100 years, even, please, our fervent plea, our fervent wish is that you call your senator and say abide by the wishes of this saintly, brilliant, caring woman and let it wait."

Voters already seem to be responding -- there was a demonstration before dawn Monday morning at the home of Judiciary Committee Chairman Sen. Lindsey Graham, R-S.C.

Schumer was likely referring to threats Democrats have been making for months to pack the Supreme Court and get rid of the legislative filibuster if they manage to take back the Senate in the November elections.

Sen. Ed Markey, D-Mass., was more direct in his threat: "Mitch McConnell set the precedent. No Supreme Court vacancies filled in an election year. If he violates it, when Democrats control the Senate in the next Congress, we must abolish the filibuster and expand the Supreme Court."

This week will be key as both sides position for the battle ahead.

McConnell is expected to speak on the Senate floor during the 3 p.m. hour on Monday in remarks that could be among the most important the 78-year-old has made in his career -- setting the tone for what is likely to be a knock-down, drag-out, confrontation of raw political power and will in the coming months. Both sides are also poised to spend massive amounts of money on this confirmation battle.

Schumer will also likely hit the Senate floor Monday during the 3 p.m. hour.

All of this will happen as the Trump administration is considering who it wants to nominate to fill the Ginsburg seat, with a nomination potentially coming as early as Friday or Saturday from Trump's pre-vetted list of candidates.

The three reported frontrunners over the weekend are 7th Circuit Court of Appeals Judge Amy Coney Barrett, Judge Barbara Lagoa of the 11th Circuit and Judge Allison Jones Rushing of the 4th Circuit.

'The dogma lives loudly within you, and that's of concern'

Trump previously considered Barrett for the seat he eventually nominated Kavanaugh to, but according to Axios at the time said he was "saving her for Ginsburg." And Barrett, a former Notre Dame Law professor (Ginsburg was a professor herself before becoming a judge), is a favorite among religious conservatives.

Democrats making similar comments in 2020 would seemingly also be attacking their presidential nominee, Joe Biden, who has featured his Catholic faith on the campaign trail as he seeks to portray himself as a moral alternative to Trump.

Now, Democrats are accusing Republicans of rank hypocrisy for moving to fill the Ginsburg seat.

'After Kavanaugh, the rules have changed as far as I'm concerned'

"In light of the vacancy created by Justice Ginsburg’s death, we call upon you to state unequivocally and publicly that you will not consider any nominee to fill Justice Ginsburg’s seat until after the next President is inaugurated," Democratic senators on the Senate Judiciary Committee said in a message to Graham. "There cannot be one set of rules for a Republican President and one set for a Democratic President, and considering a nominee before the next inauguration would be wholly inappropriate."

Graham had previously said he would hold open a vacancy happening in the last year of Trump's term, but Graham has more recently reversed himself, noting that the Senate and the presidency are in the same hands after the 2018 election when in 2014 Americans had voted for a divided government.

Graham also last month said that "the rules have changed as far as I'm concerned," after the Kavanaugh nomination battle, according to NBC News.

Graham added in a tweet Sunday: "Democrats chose to set in motion rules changes to stack the court at the Circuit level and they chose to try to destroy Brett Kavanaugh’s life to keep the Supreme Court seat open. You reap what you sow."

McConnell has made the argument that precedent is on the Republicans' side.

A Trump nominee's fate ahead of the election or while Trump is a lame duck would rest on the persuasiveness of those arguments to a small sect of moderate Republican senators and GOP senators up for reelection.

The GOP already appears to have lost two votes, Sen. Susan Collins, R-Maine, and Sen. Lisa Murkowski, R-Alaska, who have each said they think it would be inappropriate to fill the Ginsburg seat ahead of the election.

Meanwhile, moderate Sen. Lamar Alexander, R-Tenn., came out in favor of the Senate acting on the Supreme Court nomination, as did vulnerable Sen. Martha McSally, R-Ariz.

Other votes potentially in play are Sen. Mitt Romney, R-Utah, and Sen. Cory Gardner, R-Colo. Where they and other potential swing senators stand on a confirmation vote is likely to become more clear as the week goes on and especially after Trump names a nominee.

What is clear is that the 2020 presidential and U.S. Senate elections are no longer chiefly about the coronavirus pandemic or the economic crisis or race riots or the perceived morality of Biden or Trump. They are but a battleground in a massive culture war the scale of which is likely to be exacerbated by all of those factors.

"If McConnell jams someone through, which he will, there will be riots," warned GQ writer Laura Bassett.