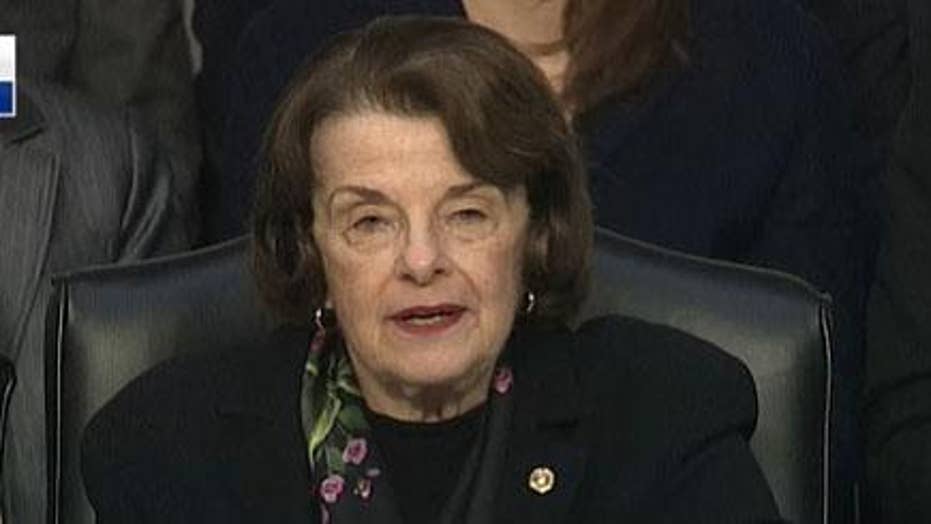 A story in the Los Angeles Times on Tuesday caused an uproar on social media after it characterized comments from Sen. Dianne Feinstein, D-Calif., to say she is leaning "toward acquitting Trump" -- causing the Democratic senator to fire back that the paper “misunderstood what I said.”

“That was my view and it still is my view," she added.  When asked whether she would ultimately vote to acquit Trump, Feinstein said: "We're not finished."

The LA Times' headline reported her comments with the headline: "Feinstein leans toward acquitting Trump as his lawyers end their impeachment defense arguments."

Feinstein eventually clarified on Twitter, suggesting that she is actually leaning toward voting to remove Trump from office.

"The LA Times misunderstood what I said today. Before the trial I said I'd keep an open mind," Feinstein tweeted. "Now that both sides made their cases, it’s clear the president’s actions were wrong. He withheld vital foreign assistance for personal political gain. That can’t be allowed to stand."

After Feinstein challenged the story, the Times changes its headline to: "Feinstein says she’s a maybe on acquitting Trump as his defense team ends impeachment arguments."

Speaking to reporters, Feinstein offered other remarks that seemed to shed light on her decision-making -- including comments that the paper acknowledged might have been a nod to House impeachment managers' arguments about Trump's fitness for office.

“Impeachment isn’t about one offense," she said, remarking on how she changed her opinion as the impeachment process proceeded. "It’s really about the character and ability and physical and mental fitness of the individual to serve the people, not themselves.”

Feinstein, who serves as ranking member on the House Judiciary Committee, was first elected to the Senate in 1992 and is considered one of the body's more liberal members.

Her comments came as the president's defense team presented its case for why House impeachment managers were wrong to argue for Trump's removal.

Republicans have maintained that House Democrats pushed impeachment as a partisan attempt to thwart the will of Americans who voted for Trump in 2016.

As the LA Times noted, only Sen. Joe Manchin, D-W.Va. -- a perceived moderate, has indicated that he might not vote for Trump's removal. “I am totally undecided," he said.

JOHN SUNUNU CALLS OUT MITT ROMNEY FOR JOINING DEMS IN CALL FOR BOLTON'S TESTIMONY: HE NEEDS TO 'GET IT TOGETHER'

Democratic votes likely won't influence the ultimate outcome, as the Republican majority seemed united behind the president. It's unclear how long the process will last, but a recent report about former National Security Adviser John Bolton raised further questions.

Bolton claimed that he heard Trump explicitly state his interest in withholding Ukrainian military aid until the government carried out investigations into Democrats, including Joe Biden.

Trump’s legal team argued forcefully against the relevance of testimony from Bolton on Tuesday as they concluded their impeachment trial defense. “This should end now, as quickly as possible,” White House counsel Pat Cipollone declared, capping a defense presentation that painted Trump as a victim and took dismissive swipes at Bolton, the potential witness who has scrambled Republican hopes for a swift end to the trial.

JOE MANCHIN FRUSTRATED WITH 'HYPOCRISY' OF SCHUMER, DERSHOWITZ, AND STARR IN TRUMP IMPEACHMENT

The legal team, in hours of arguments, delved into areas that Democrats see as outside the scope of impeachment, alleging law enforcement bias and seizing on surveillance errors that the FBI has acknowledged making in its Russian election interference probe.

Trump’s attorneys also argued that the Founding Fathers took care to make sure that impeachment was narrowly defined, with offenses clearly enumerated.

“The bar for impeachment cannot be set this low,” Jay Sekulow said. “Danger. Danger. Danger. These articles must be rejected. The Constitution requires it. Justice demands it.”

The case now moves toward written questions, with senators on both sides getting 16 hours to pose queries. By late in the week, they are expected to hold a vote on whether or not to hear from any witnesses.