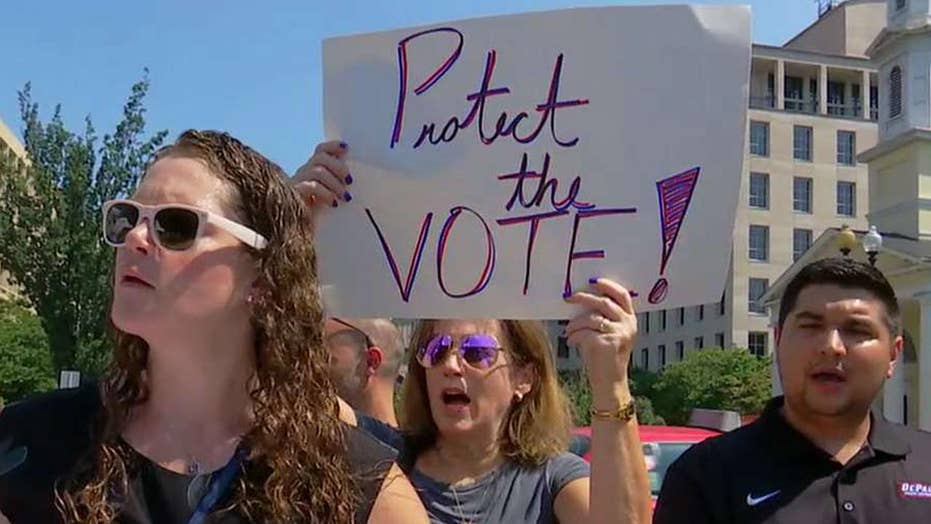 Fox News Poll: Should photo ID be required for voting?

Texas' congressional maps are still flawed by racial gerrymandering and must be partially redrawn before the 2018 elections, a three-judge federal panel ruled Tuesday.

Courts have chided Texas in recent years for intentional racial discrimination in voting maps and a strict voter ID law, and the state must now quickly redo two of the state's 36 congressional districts. One is held by Democrat Lloyd Doggett of Austin and the other by Republican Blake Farenthold.

But the ruling was not a complete victory for Democrats and minority rights groups, who sought more sweeping changes that could put more seats in play for the first midterm elections under President Donald Trump. Republicans currently hold 25 seats in Texas and Democrats have 11.

U.S. District Judge Xavier Rodriguez of San Antonio concluded that "discriminatory taint" in the Texas maps has carried on for multiple elections since 2013.  But the court preserved other districts that Democrats say deserved changes, including a historically swing district in South Texas that's currently held by Republican Will Hurd.

Luis Vera, an attorney for the League of United Latin American Citizens, cheered the ruling but said it was unlikely to drastically change the partisan advantages in districts across Texas. Vera has helped lead a long-running lawsuit over the maps since 2011.

"My first impression is that it's a great victory," Vera said. "Just a little disappointed."

The judges gave Texas until the end of the week to decide whether to give its GOP-controlled Legislature the first crack at making the changes or handle the revisions in court. Republican Attorney General Ken Paxton signaled that the state will appeal the ruling to the U.S. Supreme Court.

For years, Texas has used court-tweaked maps that Republicans rushed to permanently adopt in 2013 after its original ones were thrown out as unconstitutional. But opponents have decried the adopted maps as a quick fix that didn't purge all districts of the use of gerrymandering -- the practice of drawing boundaries to favor one political party over another -- in a racially biased way.

Under President Barack Obama, the U.S. Justice Department helped challenge some Texas voting rights laws, but the department has largely reversed that position under the Trump administration.

"We appreciate that the panel ruled in favor of Texas on many issues in the case.  But the portion of the ruling that went against Texas is puzzling considering the Legislature adopted the congressional map the same court itself adopted in 2012, and the Obama-era Department of Justice did not bring any claims against the map," Paxton said in a statement.

"We appreciate that the panel ruled in favor of Texas on many issues in the case.  But the portion of the ruling that went against Texas is puzzling."

The court is also expected to rule later on whether any changes are needed to Texas' statehouse maps.