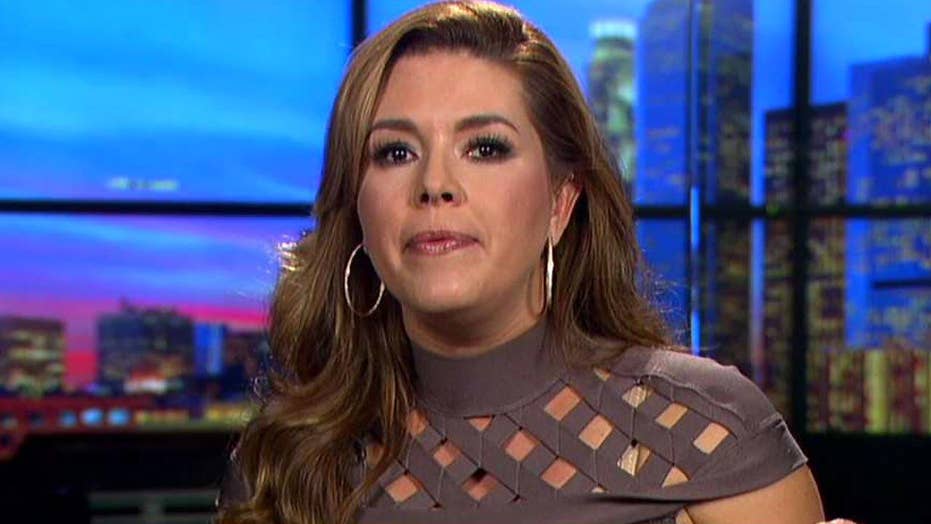 On 'The Kelly File,' the former Miss Universe says she is sharing her story for the Latino community

The former beauty queen who accused Donald Trump of making insensitive remarks about her looks and ethnicity apparently had no issue taking shots at the appearance and speaking ability of Trump’s wife.

Miss Universe 1996 Alicia Machado emerged at the center of a spat between Republican presidential nominee Trump and Democrat nominee Hillary Clinton after Clinton said during Monday’s debate that Trump two decades ago had called Machado “Miss Piggy” due to apparent weight gain. Machado quickly responded on Twitter, typing in Spanish: “Thank you, Mrs. Clinton. Your respect for women and our differences make you great! I’m with you!”

Alicia Machado interviews a model after her reign as Miss Universe. (Reuters)

But in a Tuesday interview with Cosmopolitan, Machado took a different tone when asked about Melania Trump, who, like Machado, was a model and immigrant. Trump was born in Slovenia.

“I think I speak more English than her,” Machado, a Venezuela native, said. “I don’t see anything about this girl. She’s a doll. She’s a decoration. That is how I see her.”

Alicia Machado is crowned Miss Universe in May 1996. (AP)

Machado, who a judge once accused of trying to kill him, may not see anything about Melania, but viewers saw a lot more of the ex-Miss Universe when The Sun revealed video on Thursday showing Machado having sex with a male contestant on a Spanish reality show in 2005.

While on the “Big Brother”-styled “The Farm,” Machado was caught on night vision cameras apparently having sex with a male contestant and using strong language to narrate their explicit encounter. Machado was engaged to then-Philadelphia Phillies star Bobby Abreu at the time of the indiscretion. Abreu and Machado soon broke up.

“It was a very strong experience, very difficult in all senses, and I feel very happy with the events in Spain,” Machado told Univision after the show had ended. “I had people’s support once more and I gained respect for what I am as a person and that was the purpose.”

She added: “When you do a reality show, it’s just that – a show of reality.”

Also emerging was video of Trump and Machado discussing Machado's weight in 1997, a link to which was tweeted Wednesday by a Washington Post reporter. Near the end of the clip, Trump mocks the physical appearance of several reporters, to which Machado laughs and gives a thumbs up.

VIDEO: 1997 Trump-Machado press scrum at the gym, where he crticizes her eating habits, calls reporters out of shape https://t.co/g72kpwxAYK

The latest revelations about Machado's past follow reports that a Venezuelan judge once accused her of threatening to kill him after he indicted her then-boyfriend for attempted murder.

Machado threatened "to ruin my career as a judge and ... kill me,'' Judge Maximiliano Fuenmayor said in the late-1990s.

Her then-boyfriend, Juan Rafael Rodriguez Regetti, was accused of shooting and wounding his sister's husband, who he blamed for his sister's suicide.

Francisco Antonio Sbert Mousko was shot outside a church in Caracas where his wife -- Rodriguez's sister -- was being eulogized. Sbert reportedly suffered brain damage from the attack.

The victim's family accused Machado of driving her boyfriend's getaway car, but she denied any involvement and apparently was never indicted, due to lack of evidence.