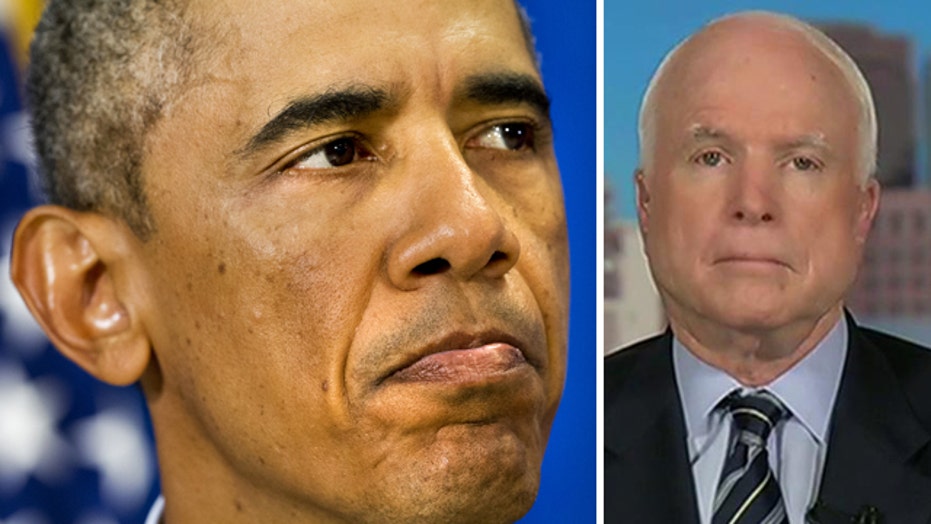 Sen. McCain on ISIS threat: Obama 'still doesn't get it'

A year after his "red line" was crossed in the deadly chemical attack against Syrian rebels and civilians -- including hundreds of children -- allegedly by Syrian government forces, President Obama finds himself in the awkward position of being on the same side as the Assad regime in the fight to keep Islamic State militants from gaining more ground in Iraq.

Since Aug. 8, U.S. drones and fighter jets have launched 90 strikes across Iraq, most recently hitting additional targets in the area of the vital Mosul Dam. The administration continues to describe the strikes as part of a limited mission -- but it's a mission, some analysts say, that has the U.S. government finding a common enemy with the Assad regime, which is fighting Islamic State militants on their side of the border.

In public, the administration is not changing its position on Assad. And State Department spokeswoman Marie Harf disputed that the U.S. and Syrian governments share a common goal in defeating ISIS.

"I would strongly disagree with the notion that we are on the same page here," Harf said on Monday, while later admitting to Fox News, "We may be looking at some of the same targets."

Harf said Wednesday that the Syrian government is in fact to blame for the rise of the Islamic State.

"It is because the Syrian regime has allowed them to flourish that ISIS or ISIL is what it is today. They are directly responsible for the growth of this terrorist group," she said.

But as the Islamic State gains strength, even supporters of the moderate opposition in Syria say those factions are weakened -- and less capable of threatening Assad's rule. Sen. John McCain, R-Ariz., told Fox News on Thursday the moderate forces are "on the ropes."

The beheading earlier this week of American journalist James Foley by Islamic State militants only underscored the threat that the terror organization now poses to western interests.

Though the Obama administration remains steadfast in its refusal to work with Assad to combat ISIS, it is showing a willingness to work with Iran.

"If they are interested in playing a constructive role in helping to degrade ISIL's capabilities then I'm sure we can have that conversation then," said Harf on Wednesday. Iran remains one of the Assad regime's largest benefactors in financial and military support, through its proxy Hezbollah.

Obama and European leaders first stated that Assad must step down in August 2011. Obama called off airstrikes against the Syrian government last year after a last-minute agreement was reached among Syria, Russia and the United States to remove the Syrian regime's declared stockpile of chemical weapons.

But the killing inside Syria continues -- 200,000 killed to date, according to some estimates.

Speaking on Martha's Vineyard Wednesday about Foley's execution, Obama made clear the administration still sees a future for Syria that doesn't involve Assad. He said the Syrian people do not deserve to live "under the shadow of a tyrant or terrorists."

Asked Wednesday by Fox News whether it remains the stated goal of the Obama administration that "Assad must go," Harf replied, "Yes."

By the same token, Obama told New York Times columnist Tom Friedman earlier this month: "We're not going to let [the Islamic State] create some caliphate through Syria and Iraq."

The Syrian regime has meanwhile been busy posturing itself as a useful ally in the fight against the terror organization.

In an interview with the Kurdish media network, Rudaw, on Aug. 18, a spokesman for the Syrian regime expressed his country's readiness to defeat the Islamic State.  "The Syrian government is ready principally for any kind of support to defeat the IS [Islamic State]," said Omran al-Zoubi, director of Syrian state media.

"That leaves our policy stance in a confused muddle, which is reflective of the nature of the conflict," said Brian Katulis, senior fellow at the Center for American Progress, in an interview with Fox News, on the question of whether Assad is a tacit partner.

"His regime has a history of implicit cooperation with Al Qaeda, as we saw in Iraq. This is not a man with whom the United States should align itself," he said in a June New York Times op-ed.

In a PBS interview on Wednesday, Ford claimed the Islamic State and Assad had even partnered in the past and warned about them doing the same again. "The Assad regime is actually, at best, watching what the Islamic State is doing and at worst is in some way coordinating with them tactically on the ground in many instances," he said.