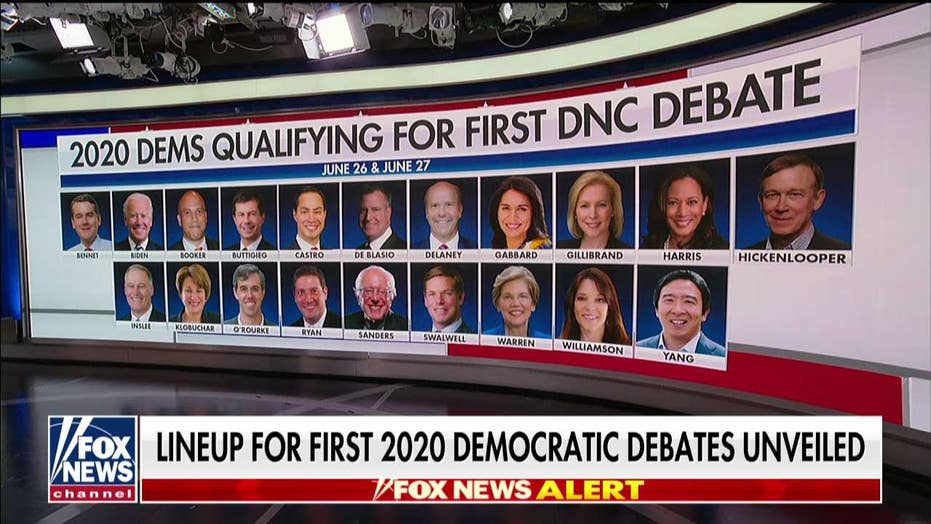 "Elizabeth Warren, the headline here is night one -- she has the stage almost to herself with a bunch of other second, third-tier folks," Henry said on "Outnumbered."

"To be fair to them, maybe one of them or more of them will have a big night. But Elizabeth Warren's been rising in the polls because she's got all these plans that the left loves ... and she has a chance to become like a second front runner," he continued.

Henry said Warren should be able to capitalize on the larger audience, and won't have to compete with some of the other big-name candidates to steal the spotlight.

"Night one is when you're going to have millions of people tuning in. There will still be a lot on night two, but no Joe Biden," Henry said. "She has the stage to herself almost, to really stand out. Maybe she'll fail. Maybe she won't rise to the occasion. I think it's a big, big opportunity for her."

Fox News contributor Lisa Boothe said it's unlikely the candidates were grouped together at random and claimed it could be geared toward ratings. She also said Buttigieg and Harris could make gains in the polls if they play their cards right.

"Night 2 you've got Biden, Sanders, Kamala Harris and Pete Buttigieg, and we're supposed to believe this is random? Most of these committees, you put your thumb on the scale a little bit. They're going to want ratings," Boothe said.

"They're going to want people to tune in. I also think if you're someone like Pete Buttigieg or a Kamala Harris -- you want to be on the stage with Biden. That’s the stage where it's at. He's the frontrunner right now. Although his lead has been slipping in Iowa. But that's where you want to be and if you're someone like Pete Buttigieg, this is a moment to capitalize on for these lesser-known candidates with lesser-known name ID -- this is your moment."