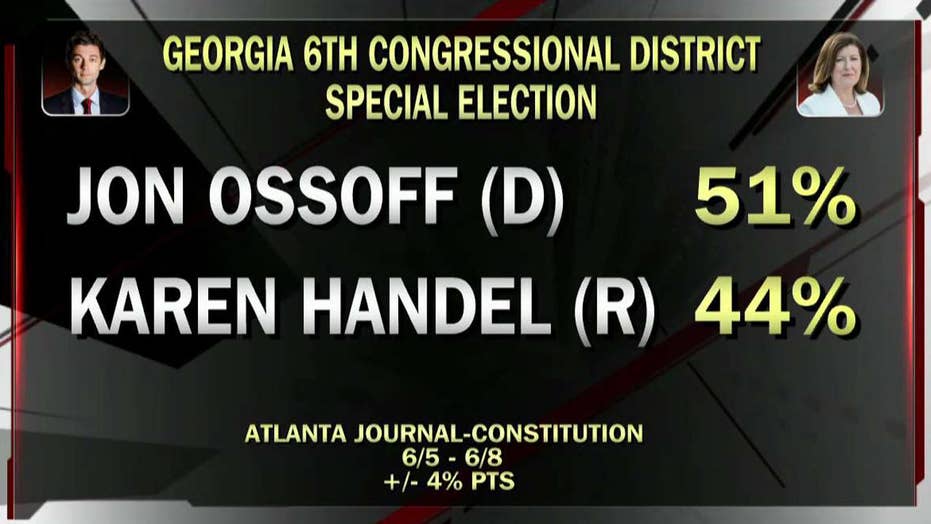 The race has attracted national attention. And by the turnout so far, Georgia residents seem to notice its high-level interest, considering news reports that show nearly 40,000 new voters who did not vote in the first primary in April have already casted their ballots.

In a district that has been safely conservative since 1979, top political analyst have declared the open-seat race a tossup. Former Georgia Secretary of State Karen Handel, a Republican, is neck in neck with the 30-year-old former congressional aide Jon Ossoff, a Democrat.

“I think that it's accurate to say that Republicans are antsy about the race,” Atlanta Journal Constitution political reporter Greg Bluestein told Fox News on Saturday.

Election Day is Tuesday, with polls closing at 7 p.m. Handel and Ossoff advanced to the special election runoff, as the top-two vote-getters in the April primary. The contest has become the most expensive House race in history, with more than $40 million spent.

Feeling the pressure of the race, President Trump sent two Cabinet members to campaign for Handel in the conservative suburbs of Georgia.

In his first campaign rally since leaving the 6th district, Price and Agriculture Secretary Sonny Perdue hosted a get out the vote rally for Handel on Saturday morning.

"The leftists have gone and typecast and they've picked this young man -- charismatic, articulate -- and they've taught him a few Republican buzzwords," Perdue said about Ossoff. "They think he can fool you. It's not gonna happen."

But the young Democrat could pull off an victory. The RealClearPolitics.com polls average shows Ossoff at 49.5 percent with Handel trailing at 46.3 percent.

“Poll after poll shows it could be basically a coin toss,” Bluestein said. “He's up by two, he’s up by three, she's up by two or three in many of these polls. So it is coming down to the wire and today's event with ... Price and Sonny Purdue showed that Republicans are really trying to rally the base around Karen Handel.”