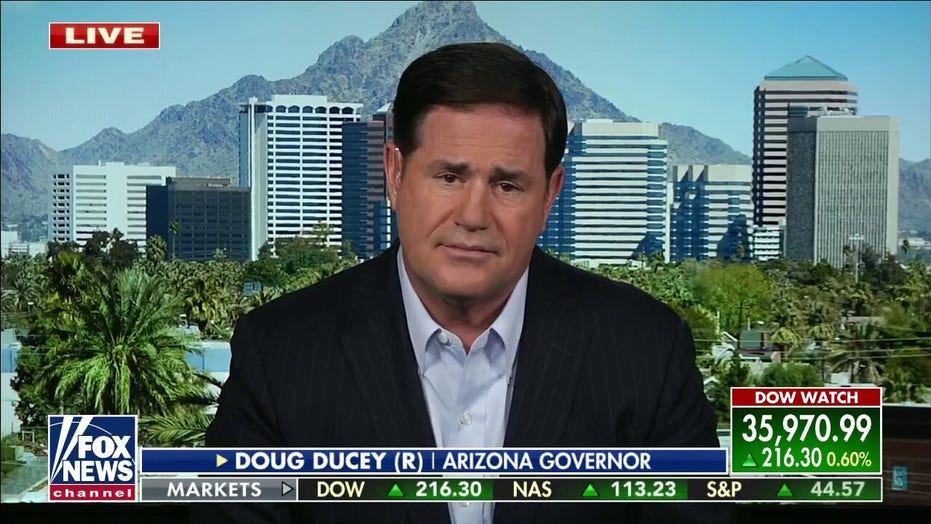 Arizona Republican Gov. Doug Ducey is renewing calls for Department of Homeland Security Sec. Alejandro Mayorkas to resign over the Biden administration's lack of support as thousands of migrants descend on the state's southern border with Mexico.

"I've worked now with three presidents – Obama, Trump and Biden – the Biden administration is far and away the worst," Ducey told Fox News host Neil Cavuto during an appearance on "Your World" on Friday.

"Secretary Mayorkas needs to resign. He came to Phoenix, but he's hiding from the border," Ducey said, adding that the "administration is completely non-responsive" on solutions or assistance.

In an effort to "support the brave men and women" who are "undermanned and under resourced" as they attempt to control the large influx of migrants along the southern border, Ducey said Arizona is "surging state badges to the border."

Ducey concluded that the rush of migrants to the southern border is "due to the Biden administration's policies" as Arizona is doing all that it can to "support our federal partners" amid a complete lack of attention and seriousness from Joe Biden and his border czar, Kamala Harris."

Migrants are seen at the Rio Grande near the Del Rio-Acuna Port of Entry in Del Rio, Texas, on September 18, 2021. (Charlie C. Peebles/Anadolu Agency via Getty Images)

Ducey also noted that Arizona is being taken advantage of by cartel members who smuggle drugs into America due to the state's lack of Title 42 expulsions, which give the administration the ability to bar people from entering the country during a health crisis such as the COVID-19 pandemic.

"The cartels take advantage of this, they use the humanitarian crisis to get the drugs, the fentanyl, the methamphetamine, and the cocaine across the border and then to surge it all across our country," Ducey said. "This is something that's infecting all of our schools and our neighborhoods and not just in border states."

A pair of migrant families from Brazil pass through a gap in the border wall to reach the United States after crossing from Mexico in Yuma, Ariz., Thursday, June 10, 2021, to seek asylum. (AP Photo/Eugene Garcia)

Yuma, Arizona, Mayor Douglas Nicholls told Fox News on Monday that his border city is not equipped to handle the massive influx of migrants crossing into the U.S.

"We need to make sure that the Department of Homeland Security, if they have to release, is releasing in communities that can handle that kind of load," Nicholls said.

Officials said an estimated 5,000 migrants attempted to enter the Yuma, Arizona, area last weekend and another 1,500 migrants tried to enter Monday. That number is likely to have increased throughout the week as more migrant groups crossed over the border.