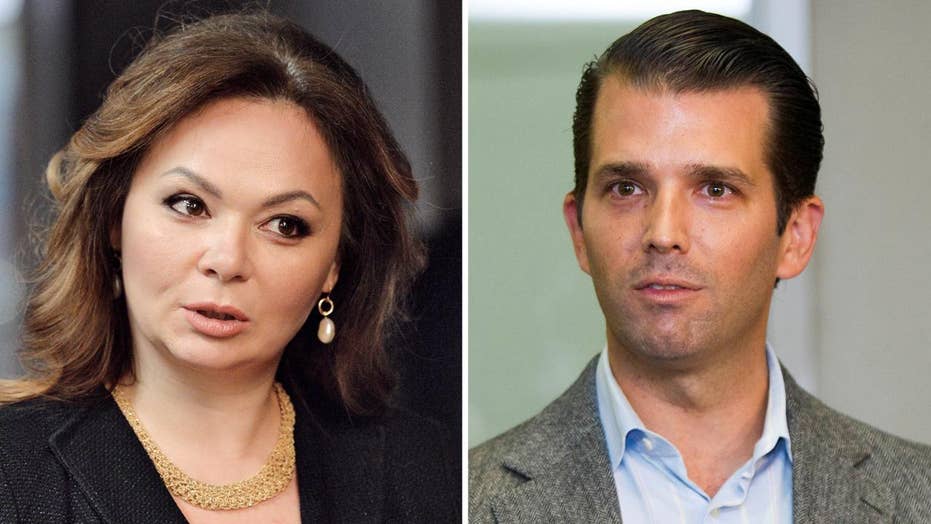 Donald Trump Jr.’s newly released emails detailing discussions that led to a meeting with a Russian lawyer during the presidential race have emboldened the president’s critics who say they show clear evidence of collusion between the Trump campaign and Russia.

“These emails show there is no longer a question of whether this campaign sought to collude with a hostile foreign power to subvert America’s democracy,” Oregon Democratic Sen. Ron Wyden said in a statement. “The question is how far the coordination goes.”

On Tuesday, the president’s son released his emails in the lead-up to a June 9, 2016 meeting with a Russian attorney after an acquaintance claimed the contact had damaging information on Democratic presidential candidate Hillary Clinton. The emails were with Rob Goldstone, who arranged the meeting with Russian lawyer Natalia Veselnitskaya. Trump campaign chairman Paul Manafort and Trump son-in-law Jared Kushner also attended the meeting.

The emails, released by Trump Jr. ahead of a New York Times story on the communications, show the president’s son was told Russia’s government preferred Trump over Clinton. "This is obviously very high level and sensitive information but is part of Russia and its government's support for Mr. Trump,” Goldstone wrote in one email released Tuesday.

“There’s no escaping it: the Trump campaign’s inner circle met with an agent of a hostile foreign power to influence the outcome of an American election,” House Democratic leader Nancy Pelosi said Tuesday.

Brian Fallon, who served as press secretary to Clinton during the presidential race, tweeted Tuesday his appreciation of a special counsel in the Russia investigation. “Thank God someone as competent and patriotic as Bob Mueller is in charge of investigating this awful mess,” he said.

Trump Jr., who is expected to discuss the situation Tuesday night at 10 p.m. ET with Fox News' Sean Hannity, said in a statement Tuesday he released the emails in the interest of transparency.

He has downplayed the significance of the meeting all along and said in his latest statement that he presumed the information the contact had was "Political Opposition Research."

"I first wanted to just have a phone call but when they didn’t work out, they said the woman would be in New York and asked if I would meet. I decided to take the meeting," he explained.

He also said the woman "was not a government official" and "had no information to provide."

He added, "To put this in context, this occurred before the current Russian fever was in vogue."

“Anytime you’re in a campaign and you get an offer from a foreign government to help your campaign, the answer is no,” he told reporters. “So I don’t know what Mr. Trump Jr.’s version of the facts are. Definitely he has to testify. That email is disturbing.”

A spokesman for Vice President Mike Pence said he was unaware of the meeting.

“He is also not focused on stories about the campaign – especially those pertaining to the time before he joined the campaign,” said Marc Lotter, Vice President Pence’s press secretary.